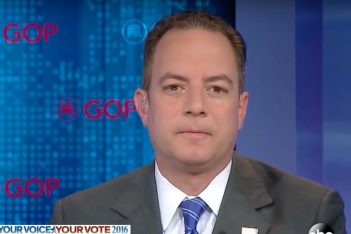 Republican National Committee Chairman Reince Priebus accused the State Department on Wednesday of delaying its response to the National Archives’ request for information about why it has only found a few emails belonging to a staffer who helped maintain Hillary Clinton’s private server.  The RNC chairman even seemed to suggest the delay was part of an intentional effort to protect Clinton during the run up to the 2016 presidential election.

Documents obtained by ABC News reportedly show the National Archives sent a request to the State Department in July that asked for an explanation about the lack of emails from Clinton’s top IT aide Bryan Pagliano. The State Department was asked to respond to the request within 30 days, but more than three months has now passed without a response.

“The State Department is clearly stonewalling another federal agency’s efforts to recover the emails of the IT staffer who set up Clinton’s illegal server and was granted immunity by the FBI,” Priebus said to ABC News. “If this isn’t an Obama Administration cover-up to protect Hillary Clinton, I don’t know what is.”

State Department spokesman John Kirby offered no explanation to the network for why the deadline was missed.

“As we have publicly explained months ago, the Department has searched for Mr. Pagliano’s email pst file and has not located one that covers the time period of Secretary Clinton’s tenure,” Kirby said. “As we have also previously explained, employees’ emails have not always been automatically retained, so the absence of this email file does not necessarily indicate that Mr. Pagliano intentionally deleted his emails.”

Kirby’s comment focuses on the State Department’s failure to locate Pagliano’s emails, but it does not address the entirety of the National Archives request.  For example, the request said “if it’s determined Federal records have been alienated or destroyed, please describe all measures your agency has taken, or expects to take, to retrieve the alienated records or retrieve them, to the extent necessary and appropriate.”

The RNC chairman argues the failure to respond to the request could be grounds for the Department of Justice to initiate an investigation into what happened to the emails.  If Pagliano destroyed the records — and Preibus seems to think he did — he could be prosecuted for the destruction of federal records.  Although, it is important to note that Pagliano did receive immunity for his cooperation in the FBI’s investigation into Clinton’s use of the private server.  And while the scope of the immunity agreement is currently unknown, Preibus does not believe the DOJ would’ve given Pagliano blanket immunity for the intentional destruction of federal records.