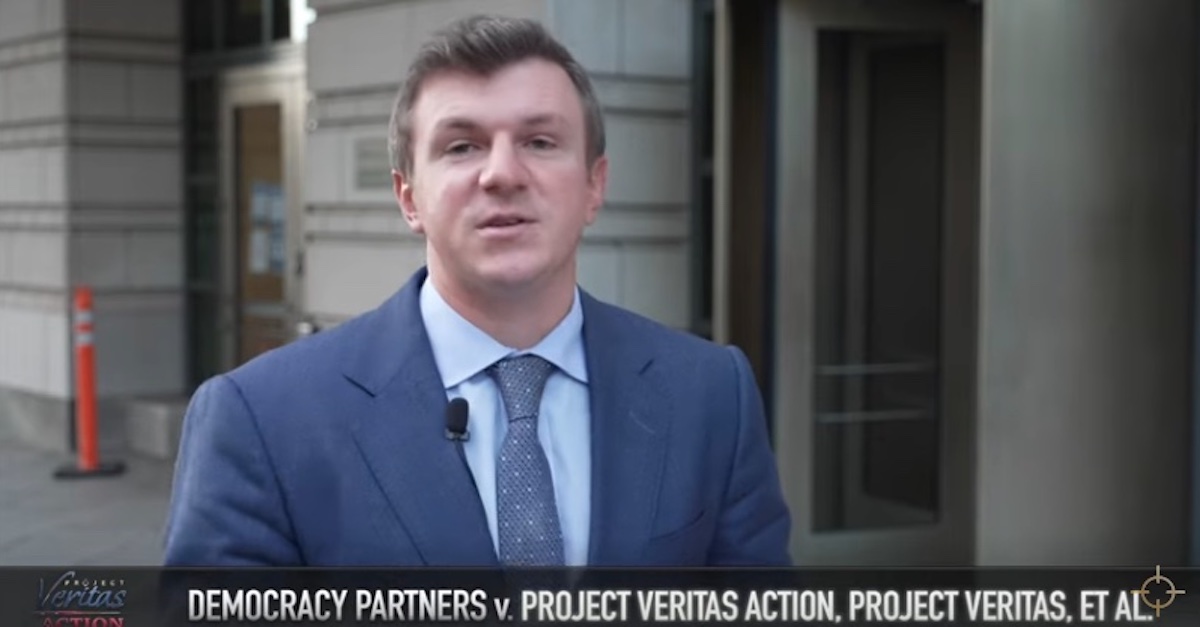 Sept. 22, 2022: James O’Keefe, founder of Project Veritas, announces plans to appeal the verdict against his organization for violating wiretapping laws and misrepresentation (image via YouTube screengrab).

Project Veritas, the conservative organization known for using deceptive tactics to go after liberal and progressive groups, will have to pay a one-time target $120,000 for sharing edited videos surreptitiously recorded by someone posing as a Democratic volunteer for a political consulting firm.

The organization, along with its founder James O’Keefe, was sued in 2017 by Democracy Partners, which had worked with Hillary Clinton‘s 2016 presidential campaign through the Democratic National Committee. According to the lawsuit, Project Veritas directed two of its members to use fake identities to gain access to the liberal group in 2016 and secretly recorded hundreds of video it would later use to spread fake information about the group.

According to court filings, Daniel Sandini posed as a democratic donor named Charles Roth, and had told Creamer that he had a niece who wanted to volunteer with a Democratic organization. Allison Maass, posing as that niece under the name Angela Brandt, was eventually brought on as an intern with Democracy Partners in September 2016. According to the complaint, Maass secretly recorded hundreds of hours of video while inside Democracy Partners, some of which Project Veritas published in a series of videos that the complaint described as “heavily edited” and containing “commentary by O’Keefe that drew false conclusions.”

The videos accused Democracy Partners of engaging in various schemes, including a conspiracy to incite violence at rallies for then-presidential candidate Donald Trump and a scheme to carry out widespread voter fraud involving non-citizens.

Project Veritas said that its actions were examples of legitimate news-gathering tactics protected by the First Amendment, and that as an unpaid intern, Maass did not have any fiduciary duty to the organization.

A federal jury, however, disagreed. According to the verdict form, Democracy Partners had proven “by a preponderance of the evidence the existence of a fiduciary relationship between Plaintiff Democracy Partners and Defendant Allison Maass,” and that Maass’ “primary or determinative purpose in hidden camera recordings of her own conversations with Democracy Partners members and staff was to commit a breach of fiduciary duty[.]”

The jury also found that Strategic Consulting Group, a member of Democracy Partners, had proven that Project Veritas had engaged in fraudulent misrepresentation, and owed the plaintiff $120,000.

The case had gone to trial after years of litigation: Democracy Partners first sued in June of 2017. Project Veritas filed a motion to dismiss the following month, citing the District of Columbia’s Anti-SLAPP statute aimed at limiting lawsuits that target people and organizations engaged in protected First Amendment activity. Senior U.S. District Judge Ellen Huvelle, a George H.W. Bush appointee, denied that motion in January of 2018.

Project Veritas tried again in May 2019 with a motion for summary judgment, which Huvelle granted in part and denied in part, allowing the claims for fraudulent misrepresentation, unlawful wiretapping, and civil conspiracy to proceed.

The case ultimately went to trial earlier this month before U.S. District Judge Paul Friedman, a Bill Clinton appointee, who took the case when Huvelle retired in 2020.

“We thank the Jury for its decision and are deeply appreciative of the time and effort the members of the Jury devoted to consider our case,” Creamer said in an emailed statement. “Hopefully, the decision today will help to discourage Mr. O’Keefe and others from conducting these kind of political spy operations – and publishing selectively edited, misleading videos in the future.”

O’Keefe, however, promptly announced his intention to appeal the verdict.

The verdict is the latest legal defeat for Project Veritas, which recently lost a defamation lawsuit against CNN and is currently fending of a separate defamation claim by a Pennsylvania postal worker. Two people in Florida recently admitted to stealing Ashley Biden’s diary and selling it to Project Veritas during the 2020 election, and the company is facing allegations of workplace harassment by former employees.

The group also has an ongoing defamation lawsuit against the New York Times.