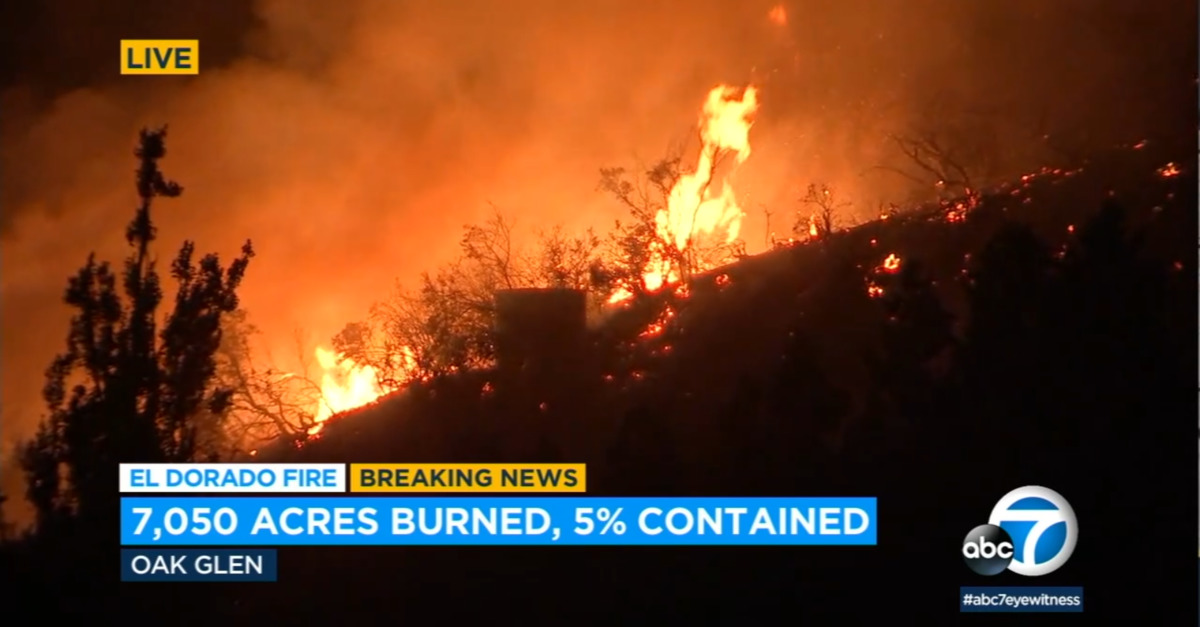 A massive fire currently making its way through Southern California has been traced to the gender reveal party fad. The expectant parents or anyone else responsible could face severe criminal penalties.

“CAL FIRE Law Enforcement has determined the El Dorado Fire, burning near Oak Glen in San Bernardino County, was caused by a smoke generating pyrotechnic device, used during a gender reveal party,” the Golden State agency dedicated to fire investigations and fighting said in a press release on Sunday.

According to the agency, the fire began late Saturday morning at the El Dorado Ranch Park located in Yucaipa, California.

The blaze quickly spread northward out of the park and on to Yucaipa Ridge, a sparsely-trafficked wilderness terrain popular among the most solitary and dedicated of hikers.

A substantial portion of the moderately difficult trek is now charred and cindered, however, due to the pyrotechnic device used by the expecting parents or others allegedly culpable for the gigantic conflagration.

The El Dorado Fire has now metastasized into nearly 7,500 acres as of Monday morning and containment is currently listed at 5%.

Evacuation orders are currently in effect for several communities in and near the fire’s path. California Governor Gavin Newsom (D) has also issued a state of emergency declaration for San Bernardino County due to the still-raging inferno.

Some 500 firefighters are presently assigned to combat and control the El Dorado Fire.

“It burned in four different directions since we’ve been here,” Ben Holmes, a U.S. Forest Service firefighter told Los Angeles County’s local CBS affiliate. “It was pushing to the east, then to the north, and then big westwardly wind shift, and (Sunday) it moved to the south. The wind has been pretty dramatically inconsistent.”

In their press release, CAL FIRE noted that “with the dry conditions and critical fire weather, it doesn’t take much to start a wildfire.”

“Those responsible for starting fires due to negligence or illegal activity can be held financially and criminally responsible,” the agency added.

Past fires set under similar circumstances offer some insight into the potential punishment in store.

In 2017, 37-year-old Border Patrol Agent Dennis Dickey started an $8 million fire in Arizona by shooting a box containing an incendiary substance with a rifle.

Video of the stunt was obtained from the U.S. Forest Service by the Arizona Daily Star and shows a blue cloud erupting from a box before flames begin to spread in the clearly tinderbox-like surrounding brush. Dickey, who pleaded guilty to starting the fire, was ordered to pay $220,000 in fines and restitution and was given five years of probation.

The individual(s) responsible for the California blaze in question–one of nearly 1,000 this summer that have caused several known deaths and rampant property damage–have yet to be identified by law enforcement.