No Qualified Immunity for Pittsburgh Cop Who Wrongly Detained Black Teenager, ‘Slammed’ Him Against a Wall 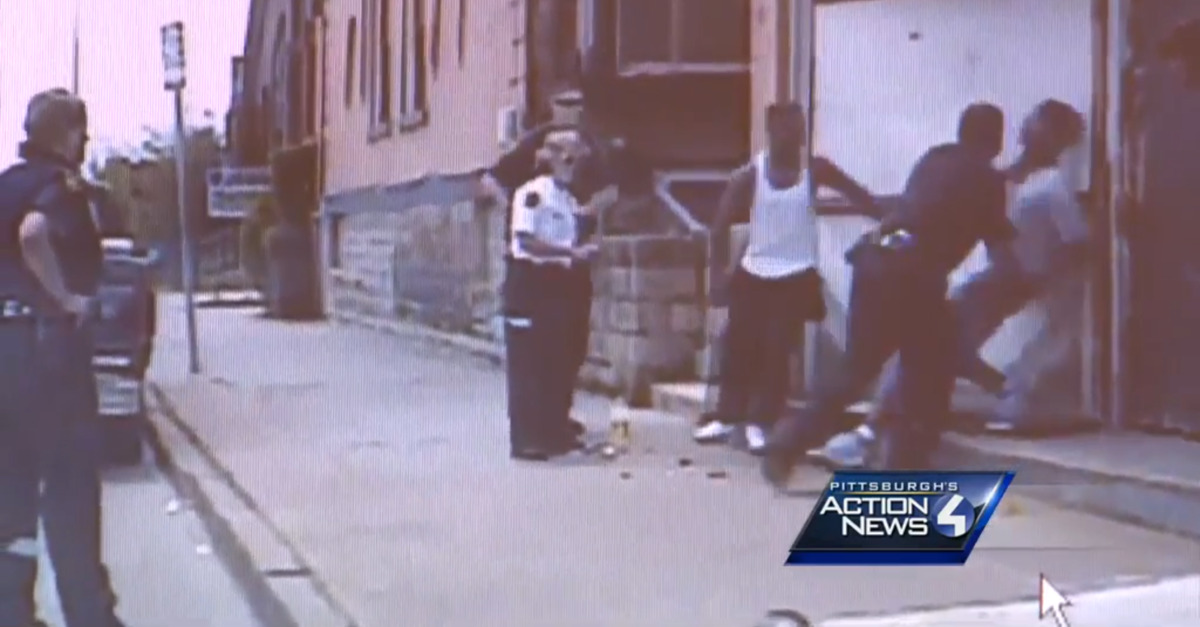 A federal appeals court on Thursday declined to grant qualified immunity to a Pittsburgh cop who slammed an unarmed teenager into a wall after falsely detaining him on suspicion of making an underage tobacco purchase.

In 2013, brothers Will El and Beyshaud El left a corner store after lawfully purchasing a pack of menthol cigarettes. Pittsburgh Police Lieutenant Reyne Kacsuta, apparently unaware of tobacco foil wrapper conventions, spotted the bright green packaging and initially thought the two had purchased synthetic marijuana. She began to follow them and the incident quickly took a turn for the worse.

“The men were unarmed and were not committing a crime,” Circuit Judge D. Michael Fisher notes in his opinion and order. “Nor did they flee or resist Lieutenant Kacsuta or the five other officers who quickly joined her. Nevertheless, the incident ended with Officer Frank Welling slamming Will against a building and taking him to the ground, and Officer Ryan Warnock deploying his taser on Beyshaud.”

The court notes how the altercation began:

Will testified that in response to his comment about being harassed, Officer Welling said, “[D]o you want to know what it feels like to be harassed?” Will stood up to, as he testified, “make sure the lieutenant heard what [Officer Welling] said to me.” The video shows Will talking to Officer Welling as each of the men gestured with a pointed forefinger. The events that happened next cascaded quickly and were over in about ten seconds.

According to the appeals court, Will “took one or two small steps in the direction of Lieutenant Kacsuta and Officer Warnock.” The police initially told the district court that “Will made a fist with his right hand and made a ‘punching motion’ toward Officer Welling,” but that claim was apparently contradicted by video evidence showing Will smoking a cigarette with the hand in question.

The appeals court summarizes the fracas as follows: “[Welling] grabbed Will . . . by his wrist and neck and slammed him back into the wall of the vacant storefront . . . and on to the pavement.” The district court had said that Welling “attacked Will, knocking him back against a door. As a result, Will suffered multiple contusions, lacerations, and abrasions.”

After Will was put down on the ground by Welling, Beyshaud rose to defend his brother and was subsequently tased until he fell to the ground.

The appeals court takes stock of the aftermath:

When the dust settled, both brothers were lying on the ground. They did not resist as six officers handcuffed and arrested them. Beyshaud was taken to the hospital and then to jail. Will went directly to jail and, after he was released, visited the hospital emergency department for lower back pain. He was told he had a contusion on his hip.

Criminal charges ensued but a review of the dashcam footage prompted the district attorney to downgrade the charges to one count of disorderly conduct for each of the Els. A lawsuit followed and the district court upheld some of the brothers’ claims against the officers involved while dismissing some of the others.

Officer Welling was deemed most at fault by both the district court and the appeals court–his efforts to have the Els’ Fourth Amendment excessive force lawsuit against him dismissed based on state law and federal §1983 Civil Rights deprivation claims were both denied. This denial, readers will note, is rare because Welling applied for the controversial doctrine of qualified immunity in order to have the case dismissed.

After a lengthy analysis, and using the summary judgment standard which views the evidence in the light most favorable to the plaintiff, the court determined that Welling was not entitled to any such protection.

“The District Court correctly concluded that, taking the facts in the light most favorable to Will, a jury could conclude there was a violation of his right to be free from the unreasonable use of force,” the appeals court determined.

The two-judge majority also had sharp words for dissenting Judge Peter Phipps–who was twice nominated to serve as a judge by President Donald Trump and who was recently included on the 45th president’s Supreme Court shortlist. Phipps would have ruled in Officer Welling’s favor.

The decision also included a lengthy soliloquy about excessive force:

Many police excessive force cases arise from dangerous situations with multiple unknowns, such as when a plaintiff flees in his car through a neighborhood with heavy pedestrian traffic or is “running in close proximity to [a] shooting” and disregards orders to get to the ground. This is not one of those situations. Viewing the facts in the light most favorable to Will, as we must, the danger to the police and the community was virtually nil. Officers approached two young men who were not engaged in any facially suspicious behavior; they were leaving a corner store. It became clear almost immediately that the men were not armed and that if any offense was being committed, it was, at most, an underage tobacco purchase. The men were upset to be stopped and said so. They did not flee. They were outnumbered six to two. One of them created a hazardous or offensive condition by standing up and taking a few small steps.

“Under these circumstances, a jury could conclude that taking Will down was an unreasonable use of force,” the court goes on. “And a consensus of cases from our sister Circuits establishes that in a situation like this, a plaintiff has the right not to be taken to the ground.”