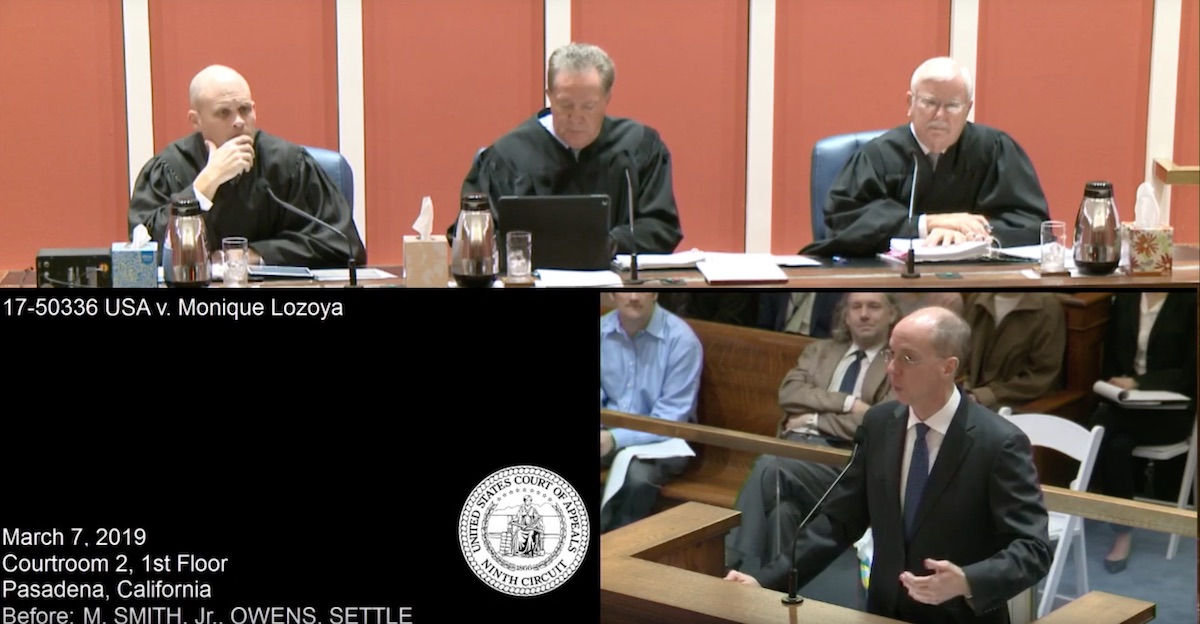 As millions of Americans head to the airport for holiday traveling, a federal court is about to answer the question on everyone’s minds: if you’re on an airplane, and you smack the guy who’s kicking your seat, where will you be prosecuted for assault?

That’s precisely the question for which Ninth Circuit ordered a full rehearing in United States v. Lazoya. Although the case involves a relatively minor misdemeanor of simple assault, its consequences could be profound.

The case came about in 2015, when Monique Lozoya and her boyfriend traveled aboard Delta flight 2321 from Minneapolis to Los Angeles. Lozoya’s plans for a sky nap were foiled when the passenger behind her — Oded Wolff — repeatedly jostled her seat. After repeated in-flight shenanigans, Lozoya and Wolff argued; when Lozoya became “really scared and nervous,” she “’pushed him away’ with an open palm, which made contact with Wolff’s face.”

The case was investigated, and eventually, Lozoya was federally prosecuted for misdemeanor assault. While there was substantial agreement over what had happened between Lozoya and Wolff, a straight-out-of-Hollywood legal issue arose: when a crime happens during a flight, where does that crime actually occur?

Under basic principles of criminal and constitutional law, a criminal trial must be held in the place where the crime was committed; typically, without a locus of action, a criminal prosecution just isn’t possible. Lozoya was prosecuted and convicted in the Central District of California. Problematically, though, when she slapped Wolff, the plane hadn’t yet reached the airspace over that area. Lozoya’s lawyers appealed her conviction on grounds of improper venue.

A three-judge panel of the Ninth Circuit overturned Lozoya’s conviction, and ruled that the proper district to prosecute the case is the one the plane was flying over when the assault occurred. Its decision requires prosecutors to do some high school math before bringing their cases; they’d need to start by calculating a flight’s trajectory, average speed, and flight time, and then cross-check that information with witness accounts of exactly when a crime took place.

If you’re thinking that such a decision would make it really, really tough to prosecute certain in-flight crimes, you’re not alone. How, for example, should an in-flight larceny be prosecuted if the moment of theft cannot be pin-pointed? What about a murder or rape that took place as an airplane crossed airspace over several districts?

In fact, the judges themselves knew their decision created something of a mess, saying, “We acknowledge a creeping absurdity in our holding.” But the judges’ hands were tied. Monique Lozoya did not assault Oded Wolff in the Central District of California; accordingly, her conviction was overturned. The three-judge panel laid the problem at Congress’s feet, saying that if Congress wants to fix this potential glitch in the system, it should pass a law to do so.

The full Ninth Circuit Court of Appeals has now ordered a rehearing before the full court. This loophole-like problem in criminal law certainly won’t be solved in time for this holiday season, and Congress is currently busy with other matters. Safe travels, y’all.