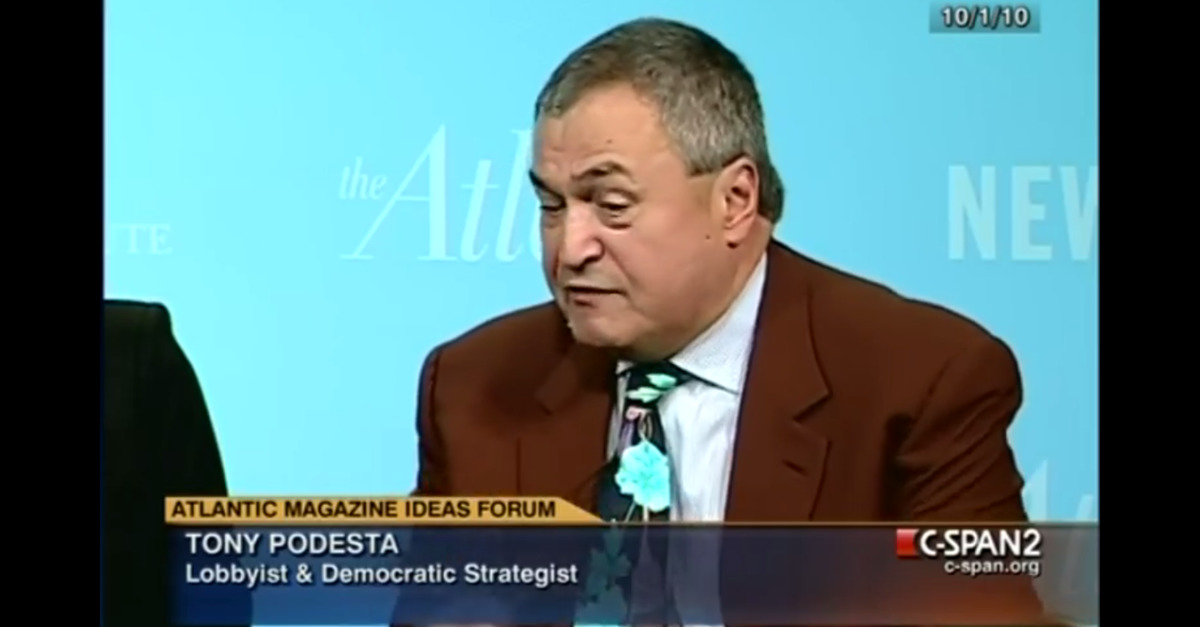 The office of special counsel Robert Mueller just released a document which appears to show that longtime Democratic Party power broker Tony Podesta misled federal investigators when questioned about his obligations, and how he understood them, under the Foreign Agents Registration Act (FARA).

The document is dated March 31, 2017 and was released late Saturday morning in line with a Freedom of Information Act (FOIA) request initiated by the New York Times‘ Kenneth Vogel. Taking the form of a letter from the U.S. Department of Justice’s (DOJ) National Security Division and addressed to Podesta’s attorney Matthew T. Sanderson, the document reads, in relevant part:

In conclusion, we have determined that Podesta must register under FARA, because the firm’s activities on behalf of the [European Centre For a Modern Ukraine (ECFMU)] constitute “political activities” as defined under the Act and were conducted at the order, request, or under the direction or control of a foreign principal…in furtherance of, and for the purpose of influencing, U.S. government officials and sections of the public within the United States, with reference to the political or public interests, policies or relations of a foreign government or foreign political party.

The document continues, noting, “the principal beneficiary of the political activities conducted within the United States was the Ukrainian government and/or the [pro-Russian] Party of Regions.”

In your correspondence, you note that Podesta registered under the Lobbying Disclosure Act [(LDA)] claiming that the exemption in Section 613(h) of FARA applies. You indicated that while your client was initially inclined to register under FARA, because the ECFMU was a foreign entity, Podesta decided instead to register under the LDA on the ground that the ECFMU represented it was not “directly or indirectly supervised, directed, controlled, financed, or subsidized in whole or in major part by a government of a foreign country or a foreign political party.”

And then there’s the pitch:

We have reviewed the information you have provided, however, as well as the lobbying reports that Podesta filed under the LDA, and we have determined that FARA registration is required for the above-described political activities, because, regardless of who “supervised, directed, controlled, financed, or subsidized” ECFMU, Podesta’s work on its behalf was not to benefit commercial interests of ECFMU, but instead was to promote the political or public interests of a foreign government or foreign political party, such that the LDA exemption cannot apply.

The letter goes on to painstakingly make clear–through the repeat use of italics–that FARA’s §613(h) exemption is only applicable to “the bona fide commercial interests” or activities of an organization with its “principal place of business in a foreign country.” The letter also reiterates that the §613(h) exemption is plainly not available for political activities of any sort.

The DOJ goes on to ding Podesta’s original representations further by noting, “Indeed, the pertinent Department of Justice regulation expressly states that ‘in no case where a foreign government or foreign political party is the principal beneficiary will the exemption [under §613(h) be recognized.”

In other words, the letter from DOJ to Sanderson appears to be saying that Podesta’s original misrepresentations were obviously false–belied by the very same statute cited in order to support Podesta’s incorrect claims.

In an emailed response to Law&Crime’s inquiries regarding the above DOJ letter, the special counsel’s press office declined to comment.

Law&Crime also reached out to both Podesta and Sanderson for comment and clarification on this story, but no response was forthcoming at the time of publication.