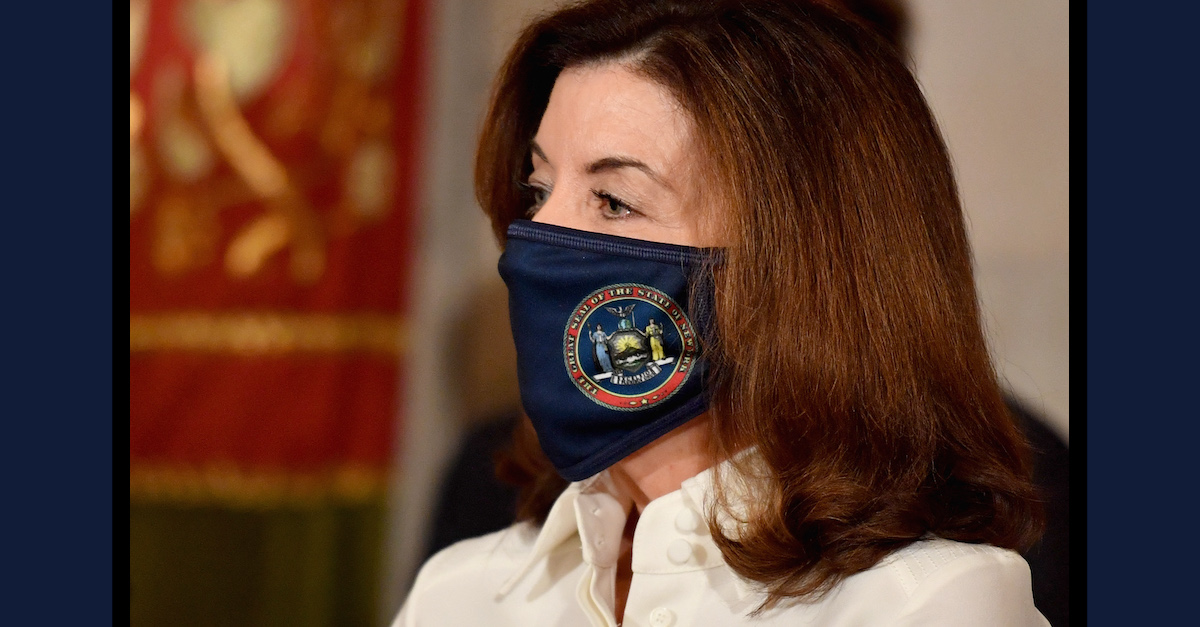 Gov. Kathy Hochul is seen wearing a face mask during her swearing-in ceremony on Aug. 24, 2021. (Photo by Angela Weiss/AFP via Getty Images.)

A judge with an intermediate New York State appellate court on Tuesday issued a stay against a lower judge’s order that declared a mask mandate in New York State to be unconstitutional.  In essence, then, the mandate was allowed to remain in effect.

Late Monday, Nassau County Supreme Court Judge Thomas Rademaker issued a six-page order that declared the mask mandate unconstitutional as a matter of New York State constitutional law.  (Recall: in New York, Supreme Court judges are akin to superior court or county court judges in other states; the intermediate appellate courts are called the Appellate Division; the high court is the Court of Appeals.)  The judge also found the mandate violative of New York’s Administrative Procedure Act and other state health laws.  He said the mask mandate was “therefore null, void and unenforceable.”

In so doing, however, Judge Rademaker was cautious about the public health message his order would send.

“To be clear, this Court does not intend that this decision in any way to question or otherwise opine on the efficacy, need, or requirement of masks as a means or tool in dealing with the COVID-19 virus,” the judge wrote.  “This Court decides only the issues of whether the subject rule was properly enacted and if so whether same can be enforced.”

Rather, the judge was asked by a collection of plaintiffs — Michael Demetriou was the nominal lead plaintiff — to determine whether Executive Law § 29-A banned the type of mandates former Gov. Andrew Cuomo (D) “included in his various COVID-19 related Executive Orders,” Judge Rademaker’s order explained.  Section 29-A of the Executive Law was passed well into the pandemic in March 2021.

After Cuomo resigned, Gov. Kathy Hochul (D) did not issue a similar executive order; § 29-A would have made that futile.  Rather, Dr. Mary T. Bassett, the state’s Commissioner of Health, issued an emergency administrative rule which contained a mask mandate; Hochul then “endorsed and enforced publicly” the health commissioner’s rule, Judge Rademaker noted.

The mask mandate — really an administrative rule — applied to New Yorkers above the age of two who were able to “medically tolerate” wearing a mask “while in a public place and not able to maintain social distancing,” Judge Rademaker continued.  Commissioner Bassett intended that the rule/mandate applied to “schools and school children.”

The method by which the emergency rule was passed set up a constitutional collision.  Commissioners and their concomitant administrative agencies are hybrids between the executive and the legislative branches of government, as they are enabled by the legislature to use executive-style authority to fine-tune broad legislative pronouncements and big-picture policy goals.  Here, the Commissioner of Health is an executive branch official who (to the surprise of no one) is tasked with deciding and implementing specific health policies that are too myopic for the attention of the legislature as a whole.  Within that constitutional framework, Judge Rademaker cited well-established case law to question whether the legislature ceded too much of its “fundamental policy-making responsibility” or legislative authority to the agency (here, the Department of Health) or whether the agency “exceeded the permissible scope of its mandate” by “engaging in inherently legislative activities.”

And the latter, the judge rationed, is what happened.

“The Court cannot find any law enacted by the State Legislature that specifically gives the Department of Health and its Commissioner the authority to enact a law,” the judge explained in a somewhat tongue-in-cheek manner (since agencies enact “rules,” not “laws,” and the latter phrase generally refers to “statutes”).

“Further, the Court can find no law to which the respondents point that would serve as the “host law” for and from which [the mask mandate rule] is enacted and intended to supplement,” the judge continued.

Specifically, the judge noted that COVID legislation contained “contact tracers” as the state’s primary response to COVID-19; the legislature did “not address the use of face masks to prevent COVID-19,” he said.

The judge circled back to Commissioner Bassett’s authority.

The judge then hauled off on a few other social issues in the Empire State while pondering who could do what — and when.  He said the Commissioner of Motor Vehicles could not, for instance, issue “new and differing speed limits or other rules of the road” every year; the Department of Corrections similarly could not implement bail reform — that was done by the legislature.

Rademacher said the “very antithesis of constitutionally established representative government” would occur if “only a few select appointees of the Governor” were allowed to “make the laws.”

The judge again circled back to pronounce that the issue was not whether masks were effective; this was purely a question of who must act:

As stated previously, there can be no doubt that every person in this State wishes, wants, and prays that this era of COVID ends soon and they will surely do their part to see that is accomplished.  However, enacting any laws to this end is entrusted solely to the State Legislature.  While the intentions of Commissioner Bassett and Governor Hochul appear to be well aimed squarely at doing what they believe is right to protect the citizens of New York State, they must take their case to the State Legislature.  Should the State Legislature, representative of and voted into office by the citizens of New York, after publicly informed debate, decide to enact laws requiring face coverings in schools and other public places then the Commissioner would likely be well grounded in properly promulgated and enacted rules to supplement such laws.

The state appealed; a judge with the Appellate Division, Second Department — an intermediate appellate court — issued a stay.  Attorney General Letitia James (D) was pleased with that decision.

“Nearly three years into the COVID-19 pandemic, we know that wearing a mask saves lives,” James said in a statement. “This mandate and today’s decision are critical in helping to stop the spread of this virus and protect individuals young and old. We will continue to do everything in our power to prioritize the health and wellbeing of all New Yorkers.”

Hochul similarly stressed the health effects of the stay.

“As Governor, my top priority is protecting the people of this state,” Hochul said. “These measures are critical tools to prevent the spread of COVID-19, make schools and businesses safe, and save lives. I commend the Attorney General for her defense of the health and safety of New Yorkers, and applaud the Appellate Division, Second Department for siding with common sense and granting an interim stay to keep the state’s important masking regulations in place. We will not stop fighting to protect New Yorkers, and we are confident we will continue to prevail.”

The litigation, which was filed in late December in Nassau County Supreme Court, named the New York State Department of Health, the Public Health and Health Planning Council, Commissioner Bassett, and Gov. Hochul as defendants.  It was filed by attorney Chad LaVeglia, whose websites proclaim that he is “Bringing the Power Back To The People,” that he supports “New Yorkers Fighting Tyranny,” and that Hochul and Bassett are “The Dictators” being fought.

“Petitioners cannot keep up with the myriad of mandates being promulgating from the same base it challenges,” an affirmation in support of the same base it challenges, LaVeglia said in an affirmation in support of the litigation and with reference to the “base” of laws from which the challenged mandates flowed.  “If the court adjudicates the ‘base’ then it by extension settles the validity of all rules stemming from it.”