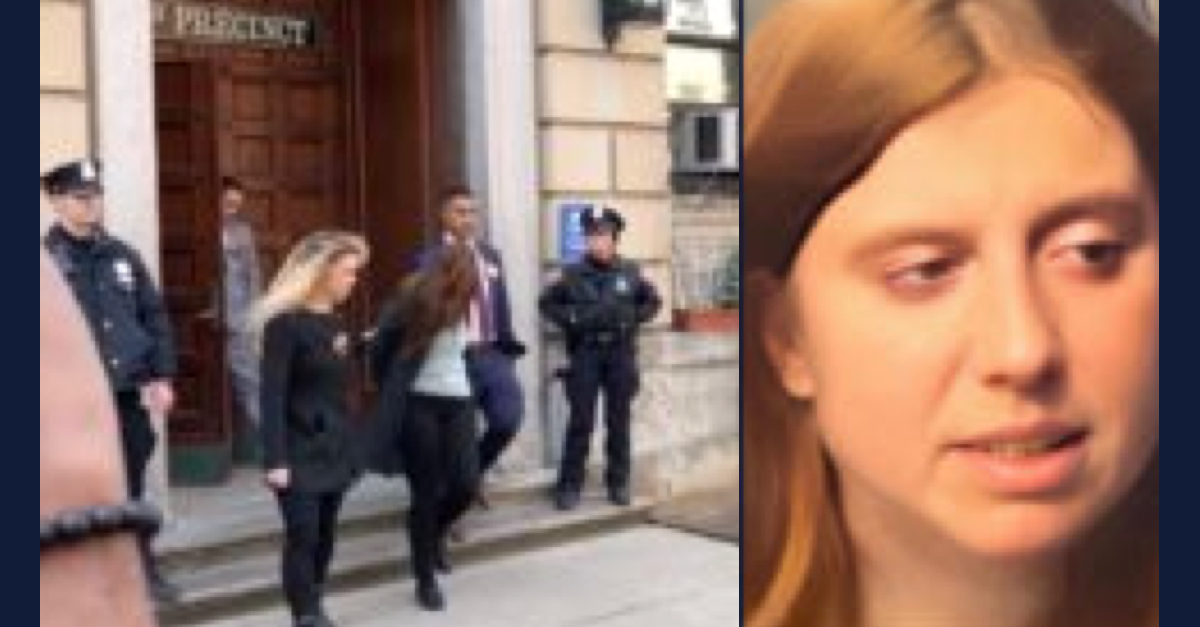 Left: Lauren Pazienza leaves a New York courthouse on March 22, 2022, after her arrest in connection with the death of 87-year-old singing coach Barbara Gustern, who died from her injuries after allegedly being shoved onto the sidewalk. Right: Pazienza as seen on MTA surveillance footage. (Images via WNBC and MTA.)

A New York judge has ordered that the woman accused of killing an elderly famed vocal coach by shoving her to the ground be detained pending trial.

Lauren Pazienza, 26, has been indicted for fatally pushing Barbara Gustern, 87, at around 8:30 p.m. in Chelsea on March 10 in what appears to have been an unprovoked attack.

According to prosecutors, Pazienza stormed toward Gustern and shoved her to the sidewalk with enough force to cause a large gash in the older woman’s forehead. Pazienza allegedly left the scene, although surveillance video seems to indicate she later watched an ambulance in front of Gustern’s apartment.

Gustern, who was still lucid in the moments after the attack, reportedly told a friend: “I’ve never been hit so hard in my life.” She died in the hospital days later.

Gustern was known as a legendary vocal coach who coached rock stars and Broadway singers. Clients reportedly included Debbie Harry, the lead singer of Blondie, the cast of the 2019 revival of Oklahoma. Pazienza is reportedly a former event planner.

Pazienza was arrested on March 22, nearly two weeks after the incident. She is charged with first degree manslaughter and second degree assault, and she faces up to 25 years in prison in convicted.

“This was a senseless and unprovoked attack,” New York District Attorney Alvin Bragg said in a press release Tuesday. “Barbara Gustern was a beloved vocal coach who lived a vibrant and active life at the age of 87, and her loss was felt deeply by many throughout the city. After allegedly walking away from Ms. Gustern as she laid on the ground bleeding, Lauren Pazienza went to great lengths to avoid accountability for her actions.”

Pazienza has pleaded not guilty.

“She Had Never Been Hit So Hard in Her Life”

Prosecutors provided significantly more information in their request to remand Pazienza back to jail pending trial.

Pazienza and her fiancé, identified in media reports as Naveen Pereira, had allegedly gone out that night, a Thursday, to celebrate the 100th day before their wedding, what was set for June, according to prosecutors.

During their visits to multiple art galleries in Chelsea, Pazienza allegedly had several glasses of wine. The couple then got food from a food truck and were eating in Chelsea Park when a park employee reportedly told her she would have to leave because the park was closing soon.

“The defendant became angry, started shouting and cursing at the part employee, threw her food onto her fiancé, and stormed out of the park,” the remand request says. “Not knowing where she had gone, her fiancé packed up his things and began to head back to the train, intending to meet her back at their apartment in Astoria.”

Meanwhile, Pazienza “stormed down 28th street.” She allegedly spotted Gustern. Prosecutors used witness testimony from a friend who was helping Gustern minutes after the assault to describe what happened next:

We know from Ms. Gustern’s own description of the assault, given to her friend minutes after, that the defendant “ran across the [street],” directly toward Ms. Gustern, called her a “bitch,” and pushed her “as hard as Ms. Gustern had ever been hit in her life” in the direction of a metal fence directly to Ms. Gustern’s left side. Ms. Gustern fell to the ground, striking her head either against the metal fence or the cement. The defendant turned around and walked away, leaving Ms. Gustern prone on the sidewalk, bleeding from the head.

A second eyewitness who was riding his bike down West 28th Street at the time said he saw a taller woman—Pazienza, at 5 feet 7 inches—push a shorter woman—Gustern, who was 4-foot-11-inches—with so much force that Gustern “fell in an arc, falling directly on her head.”

Gustern was bleeding “profusely” from the head by the time the witness reached her. He reportedly helped Gustern to her apartment building, where they encountered a friend who lived there.

“In what turned out to be her dying words, Ms. Gustern told her friend what had happened, that a woman of about 30 years old with long, dark hair ran across the street directly at her, called her a ‘bitch,’ and pushed her,” prosecutors said. “Ms. Gustern repeatedly said that she had never been hit so hard in her life.”

Gustern’s condition worsened from there, as her brain swelled with blood. Despite emergency surgery at the hospital, Gustern succumbed to her wounds, dying five days later on Wednesday, March 16, after being removed from life support.

Prosecutors: The Evidence “Inescapably Leads to the Conclusion” that Pazienza “Committed Each and Every One of the Charged Crimes.”

Minutes after allegedly shoving Gustern, Pazienza called her fiancé and asked him to meet up with her. She did not tell him what had happened at that time.

“When they did eventually find each other, she said nothing about the fact that she had just shoved an older woman to the cement,” the remand request said. “Instead, she started to argue with her fiancé, accusing him of ruining her night. Her fiancé refused to engage with her, and they eventually took the train back to their apartment in Astoria[.]”

Pazienza eventually told her fiancé shortly before going to bed that she had pushed someone on the street that night, saying that she thought they might have fallen, and she walked away. She had no explanation other than the person “might have said something,” but she wasn’t sure.

She apparently became “really scared and nervous” the following Sunday, March 13, after reading a news article about Gustern. She told a cousin about the shove, and then three days later, after Gustern had died on March 16, she went to her parents’ house on Long Island.

Prosecutors say that’s when Pazienza deleted all her social media and took down her wedding website. The next day, she reportedly stopped using her cell phone, which she ultimately left at her aunt’s house in the hope that police wouldn’t find it.

An anonymous tip on March 19 led police to Pazienza’s parents’ house on March 21. Her father answered the door and refused to let police inside, claiming that Pazienza was not at home.

“We now know from her fiancé that the defendant was staying with aunt, where she was less likely to be found by the police,” the remand request says.

Pazienza eventually turned herself in, but prosecutors say that what it took for that to happen should serve as a warning as to Pazienza’s reliability.

“It was only at after the police visited her parents, despite all of the media attention that this incident has received, despite the fact that the defendant clearly knew what she had done when she fled the city, despite the pleas from the victim’s loved ones begging for the perpetrator to come forward, that the defendant’s counsel contacted the police and arranged for her to surrender this morning,” prosecutors said in the remand request.

Prosecutors argued that when they first charged Pazienza, they were unsure about whether her actions were intentional or reckless, but further investigation has removed all doubt, saying that the evidence in the case is overwhelming and that it “inescapably leads to the conclusion that she committed each and every one of the charged crimes.”

Prosecutors also say that Pazienza, who faces up to 25 years in prison on the manslaughter charge, should be considered a serious flight risk.

“She successfully evaded apprehension for almost two weeks, despite the extraordinary resources devoted to finding her,” the prosecutor’s filing said, noting the fact that Pazienza’s mother paid $500,000 cash bail is evidence of significant resources.

“The question for this Court is whether, when faced with as much as 25 years after trial, will she come back to this Court to face those consequences?” the request for remand asked. “The People have no confidence that she will. For those very reasons, it is commonplace that defendants who have caused the death of another person and are facing significant sentences are remanded pending trial.”

Pazienza’s attorney Arthur Aidala did not immediately respond to Law&Crime’s request for comment on Pazienza’s indictment and remand. He had previously implied that the evidence of his client’s guilt wasn’t necessarily clear.

You can read the DA’s request for remand, below.

[Images via screengrab/WNBC and MTA.]