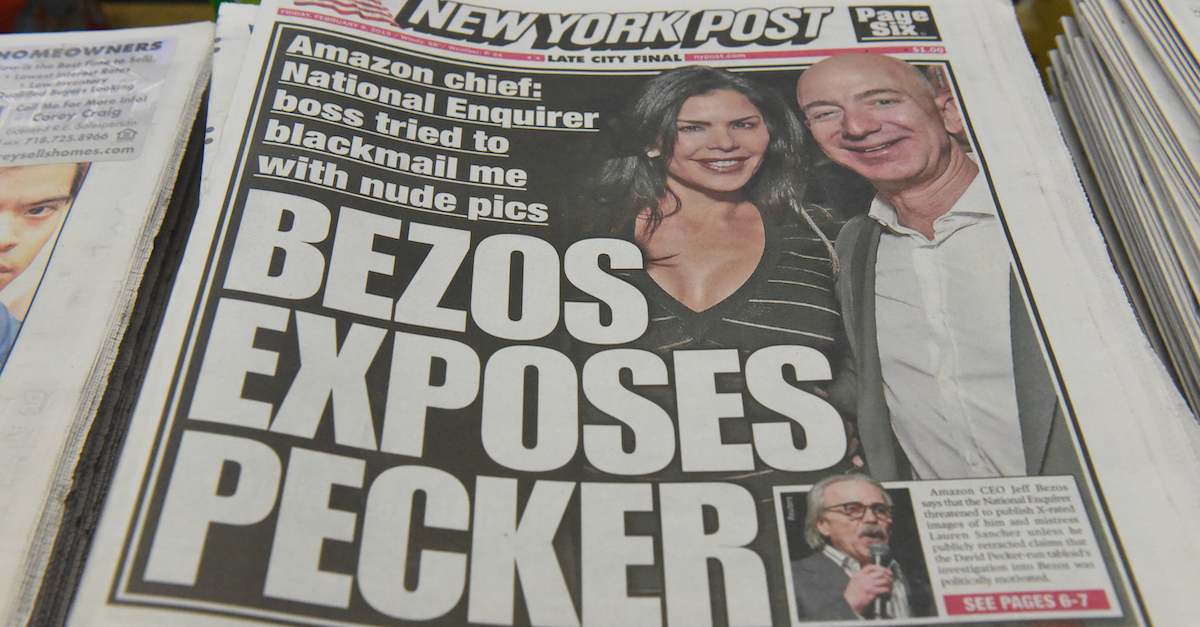 The New York Post with a headline referring to Jeff Bezos is photographed at a convenience store on February 8, 2019 in New York City. Jeff Bezos, CEO of Amazon is accusing the David J. Pecker, publisher of National Enquirer, the nations leading supermarket tabloid, of extortion and blackmail.

A Monday filing in a Washington State court purports to offer several new details about the efforts to keep an affair between billionaire Jeff Bezos and actress Lauren Sanchez out of the spotlight.

The cast of characters involved here–not to mention the overarching twists and turns of the story itself–is long and winding, implicating several legal actions as well as grievances both large and small.

Sanchez’s brother and former manager Michael Sanchez was sued by Bezos and his security chief Gavin de Becker in late June of this year. Technically an attachment lawsuit, the Bezos-de Becker action accuses Michael Sanchez of fraudulently transferring a property he owns to an LLC in order to avoid a monetary judgment. This effort aims to transfer that property – in addition to “any of [Sanchez’s] assets” – to Bezos and de Becker in order to satisfy the outstanding judgment.

In early 2020, Michael Sanchez sued Bezos and de Becker for defamation. The American business oligarch and his security boss responded by filing an anti-SLAPP motion to cut that filing off at the pass on what are essentially free speech and expression grounds.

“In the California Action, Mr. Sanchez claimed that Mr. Bezos and Mr. de Becker defamed him by falsely stating that he provided the National Enquirer with photographs of Mr. Bezos’ genitalia,” the June attachment lawsuit offers in brief summary.

Strategic lawsuits against public participation (SLAPP) are anti-speech lawsuits generally cloaked under other legal pretenses but which effectively chill, censor and intimidate free speech by forcing defendants to shell out cash for the legal fees necessary to defend against them. Several states have anti-SLAPP legislation which aims to deter such politically-oriented abuses of the legal system.

In the Monday filing, Michael Sanchez recounts the events that led up to his lawsuit–and the actions that Bezos and de Becker have taken against him through the courts since their late 2020 victory.

To hear Michael Sanchez tell it, he was privy to his sister’s habit of having affairs with billionaires and learned of the Bezos dalliance during the summer of 2018 when tabloid reporters with The National Enquirer approached him and offered to work with him.

From the Monday filing:

After putting their story together, The Enquirer approached Mr. Sanchez. He understood that an uncontrolled exposé by The Enquirer, or any media outlet, would be brutal, damaging his sister’s career and traumatizing her parents and her children. Had it been published in September 2018, it very likely would have destroyed Ms. Sanchez’s relationship with Mr. Bezos. So, Mr. Sanchez made the tactical decision to work strategically with The Enquirer to engineer a “win-win-win” solution, the sort of thing he had regularly done for his sister and [American Media, Inc.] over the past 15 years. In return for simply verifying the affair, Mr. Sanchez gained invaluable visibility into the timing, delayed the inevitable scandal story by four months, and softened the narrative.

While acknowledging that he did, in fact, verify the affair, Michael Sanchez hotly disputes that he was the original source of the tabloid’s scoop. That leak, according to the filing, was the doing of his sister’s then-husband and fellow media owner Patrick Whitesell.

A high-level whistleblower and former reporter at The Enquirer, Nikolaos Hatziefstathiou, recently revealed that he was assigned to investigate the affair by Dylan Howard, the Chief Content Officer of American Media, Inc. (“AMI”), The Enquirer’s parent company, in the summer of 2018. The whistleblower stated that Mr. Howard informed him (a) that Patrick Whitesell, Ms. Sanchez’s then-husband and chairman of media conglomerate Endeavor, had leaked the story to the Enquirer; (b) that Mr. Whitesell wanted to take advantage of the “get out of divorce free card” that had fallen into his lap, namely the discovery of the affair; (c) that Mr. Whitesell’s involvement as the source could never be disclosed under any circumstances; (d) that the whistleblower was not permitted to contact any member of Mr. Whitesell’s family or Pia Miller, whom the whistleblower later learned was having an affair with Mr. Whitesell, and who, on information and belief, is now married to Mr. Whitesell; and (e) that AMI and Endeavor were entering into a secret $10 million podcast production deal.

With multiple parties and pieces at play, and working on behalf of both his sister (then still his client) and her latest “golden goose,” Michael Sanchez claims in the filing that he “developed a public-relations strategy and a personal roadmap to guide the couple and their then-unknowing spouses and children through the imminent scandal.”

Eventually, however, things took a turn for the worse when Bezos himself “panicked and made the fateful decision to publicly announce his divorce via Twitter,” according to the Monday court filing.

“In an instant, the softened narrative Mr. Sanchez had worked so hard to secure—a love story that the families had already dealt with—was rewritten as a sordid cheating scandal announced by The Enquirer online, and then published in the tabloid’s first and only ‘special edition’ days later,” the Monday filing goes on. “The Enquirer, in an effort to protect Mr. Whitesell and The Enquirer-Endeavor business relationship, falsely identified Mr. Sanchez as the person who tipped off The Enquirer about the affair and as the tabloid’s ‘sole source.’ In fact, as the whistleblower revealed, Mr. Howard had identified Mr. Whitesell as the person who had earlier leaked the story to The Enquirer, and that The Enquirer’s story was written before it ever reached out to Mr. Sanchez.”

His career as a talent management and media publicist in tatters, Michael Sanchez then began work on his defamation lawsuits. According to the Monday filing, those efforts were intentionally undercut by attorneys who interacted with Howard and Whitesell in other legal situations.

“As a direct result of the chaos caused by [lawyer John] Pierce’s behavior, Mr. Sanchez reluctantly agreed to file a watered-down version of the complaint based on promises from [attorney Mike] Zeller and others to draft an amended complaint to be filed when [attorney Enoch] Liang was ‘up to speed,'” the filing alleges. “But only days after the slimmed-down complaint was filed, Messrs. Bezos and de Becker filed an anti-SLAPP motion, which prevented the filing of an amended complaint.”

That semi-sordid history out of the way, the state of Michael Sanchez’s legal affairs is as follows: Bezos and de Becker got the defamation lawsuit tossed and won a substantial monetary damages award in excess of $250,000–which Michael Sanchez was ill-equipped to pay.

The plaintiff-turned-defendant claims he put his house up for sale to raise those funds but alleges that Bezos and de Becker quickly seized upon the fact of the listing to cause even more chaos in his life.

“So Mr. Sanchez, who did not have easy access to that much money, and whose career had been destroyed by Messrs. Bezos and de Becker’s false allegations, went about trying to put together $254,404.26 to pay the richest man in the world—an amount that Mr. Bezos makes about every 2 minutes,” the filing continues. “Among other things that Mr. Sanchez did was put his rental house in Los Angeles, located at 1279 Ozeta Terrace, Los Angeles, California, up for sale, under market value to secure a quick sale. It went under contract days later and is set to close on July 16, 2021. When Messrs. Bezos and de Becker learned that Ozeta Terrace was under contract, did they reach out to Mr. Sanchez’s counsel to see whether he would be in a position to pay the judgment after the house sold? No. Instead, on June 24, 2021, the plaintiffs filed this lawsuit falsely accusing Mr. Sanchez of fraud and wrongly put a ‘lis pendens’ on Ozeta Terrace, intentionally clouding title to the house and effectively preventing the sale from going through.”

In an email obtained by Law&Crime, Michael Sanchez attributes the latest Bezos-de Becker legal volley as a fit of pique in response to the Amazon founder being beaten into space by fellow billionaire Richard Branson.

“Bottom line: On Sunday, Richard Branson outflanked Jeff Bezos, stealing his thunder and ruining his long held dream of being the first billionaire in space,” Michael Sanchez wrote. “The fact that Elon Musk was there in Truth or Consequences, N.M., displaying class and dignity as Bezos’ ill-equipped PR team was sending whiny, bitter tweets – speaks volumes about both men. Consequences indeed.”