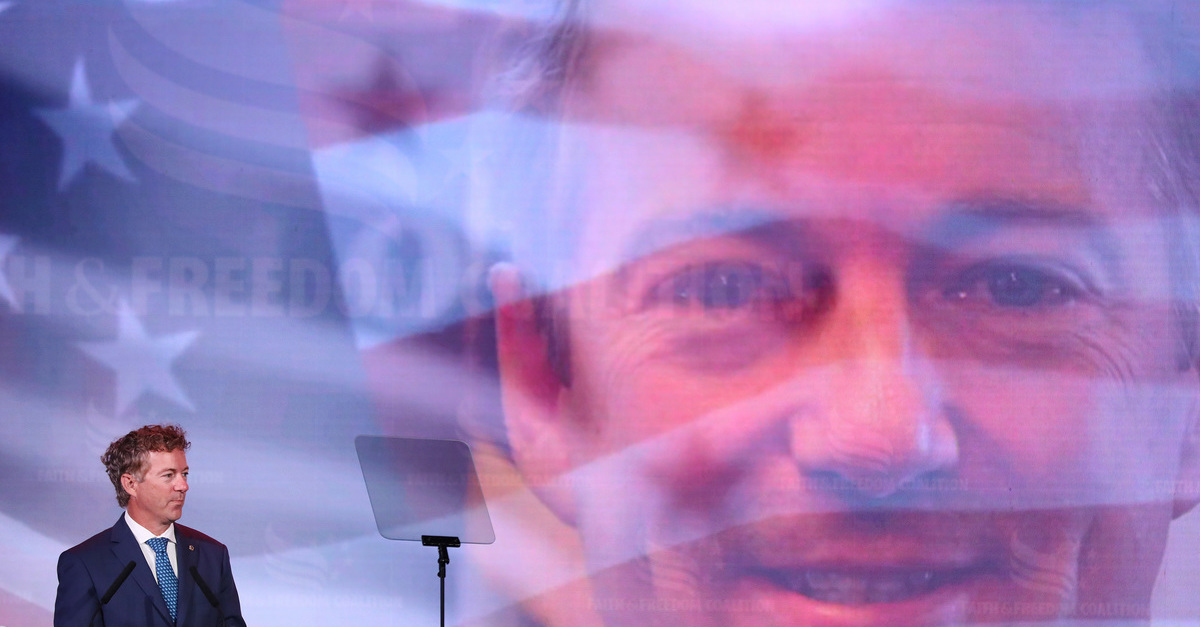 The man convicted for attacking Sen. Rand Paul (R-Ky.) during the fall of 2017 had his sentence overturned by an appeals court–because it was apparently viewed as much too light and forgiving.

In a somewhat rare opinion issued by the U.S. Court of Appeals for the Sixth Circuit on Monday, a three-judge panel found that Rene Boucher‘s prior sentence was “substantively unreasonable” in light of U.S. Federal Sentencing Guidelines. The Guidelines recommended a sentence of between 21 and 27 months in prison. Boucher, however, was ultimately only sentenced to 30 days imprisonment.

The court’s decision offers a tidy history of the dispute between Paul and Boucher that led up to the attack:

Paul and Boucher were neighbors. According to Paul, their relationship was unremarkable—they had not directly spoken in years, though they might wave to one another if they crossed paths on the street. From Boucher’s perspective, however, problems between them began in the summer of 2017, when he decided to trim the branches of five maple trees in Paul’s backyard that had grown over the Boucher/Paul property line. Sometime shortly thereafter, Paul dropped a bundle of limbs and brush at the edge of his property, apparently in the sightline of Boucher’s home. A few weeks passed and the bundle remained. Frustrated by the sight of yard debris, Boucher crossed onto Paul’s property, removed the limbs and brush, and hauled them off in dumpsters.

“The following month, Boucher noticed another bundle of limbs and brush in roughly the same location,” the decision notes. “He hauled it off again. A few days later, a bundle reappeared. This time Boucher did not haul it away; he poured gasoline over the debris and lit a match. The ensuing fireball caught him by surprise. The debris was burned, but so was Boucher—he suffered second-degree burns on his arms, neck, and face.”

After that, things quickly spiraled (quite literally) downhill.

On November 3, 2017, after Paul allegedly blew a bunch of leaves onto Boucher’s property, the aggrieved neighbor “ran 60 yards downhill and hurled himself headfirst into Paul’s lower back.”

The Bluegrass State’s junior senator fought back and quickly ran away from the violent altercation–but in the end, he was left with six broken ribs; three of which were snapped completely in half. Paul’s lungs were also bruised by the impact of Boucher’s body on the senator’s 5’6″-frame.

Complications from those injuries–including various bouts of pneumonia–quickly arose and Paul now claims to suffer from “chronic lateral back pain over the ribs.”

The opinion explains how the court initially took the attack and injuries into consideration:

[Boucher’s] presentence report (PSR) recommended a five-level sentencing enhancement because Paul had suffered “serious bodily injuries.” Boucher did not object. The five-level increase was partially offset by a three-level reduction for acceptance of responsibility, resulting in a Guidelines sentencing range of 21 to 27 months in prison.

In other words, Boucher took full responsibility for the attack against Paul during the sentencing portion of his criminal case and accepting such responsibility resulted in an official recommendation lower than what the government asked for under the Sentencing Guidelines promulgated by the U.S. Sentencing Commission.

Two prevailing factors led to the initial 30-day sentence: (1) the attack being the product of a neighborly dispute about property lines and lawn debris; and (2) Boucher’s outstanding reputation as a good citizen of Bowling Green, Kentucky.

Monday’s opinion vacates and remands that original sentence on the aforementioned grounds. Again the Sixth Circuit:

While the district court focused heavily on the isolated, apolitical nature of the dispute, it gave little weight to “the need for the sentence imposed . . . to reflect the seriousness of [Boucher’s] offense.”The court did not address Paul’s broken ribs, his damaged lung, his bouts of pneumonia, or his chronic pain. And although the court briefly recognized that Boucher’s “sentence should not . . . diminish the seriousness of the harm that was caused to the senator,” it did not explain why Boucher’s 30-day sentence accounted for the severity of Paul’s injuries. Summary reference to “the seriousness of the harm,” without tying that harm to the 30-day sentence imposed, was not enough.

The decision will now go back down to the lower court–and that district court will still be allowed to craft a sentence of its choosing. They may even attempt to let the original 30-day sentence stand–but they’ll first have to take a closer look at (and author a deeper judicial analysis of) the federal sentencing factors.

“I continue to find that courts are much more interested in seriously questioning 30-day sentences when prosecutors appeal than in questioning 30-year sentences when defendants appeal. And so it goes in incarceration nation,” said Ohio State University Moritz College of Law Professor Douglas A. Berman.