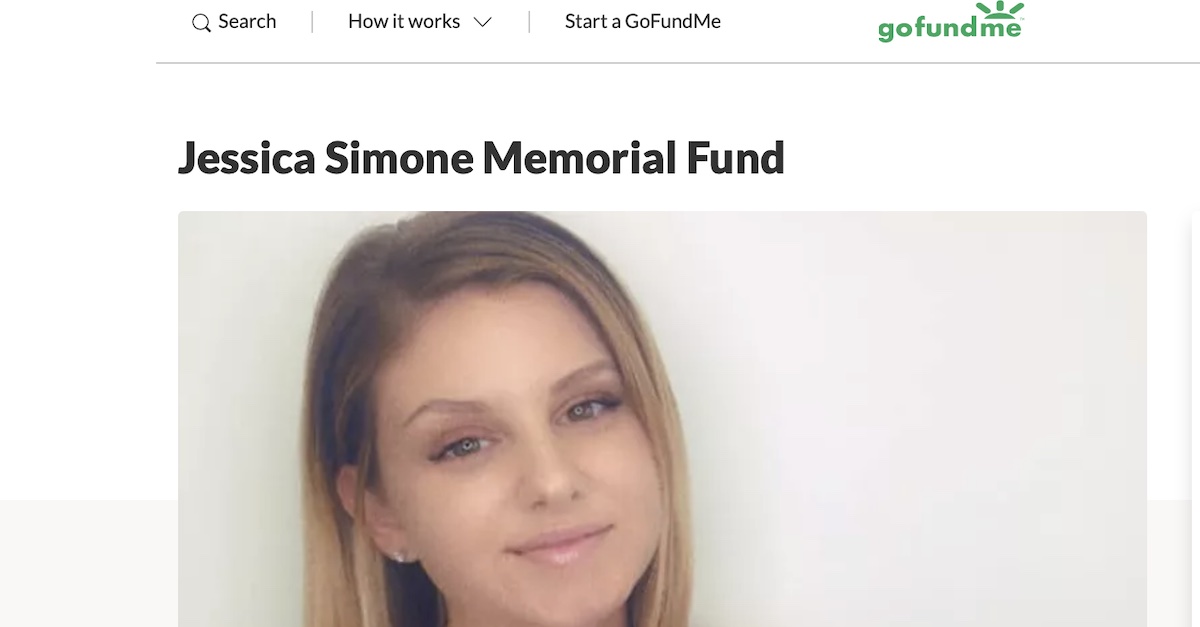 A Massachusetts woman who was killed in a two-car crash early Sunday morning in Worcester has been identified as the daughter of a man who was murdered in 1994.

Jessica Simone turned 35 years old on Sept. 26 and was studying to become a radiology technician, Simone’s family said in a GoFundMe campaign to raise money for her son Josiah. Just two weeks after her 35th birthday, Simone was killed in a 2 a.m. car crash that reportedly also injured two others. All three people were reportedly taken to the hospital, but Simone did not survive. Her family said that she died Sunday at UMass Memorial Medical Center.

The cause and circumstances of the crash have not been reported.

“It is with extreme sadness that we announce the passing of Jessica Simone. Our family is heartbroken. Jessica was a wonderful mother, daughter, sister, and a shining light to everyone who knew her. She touched the lives of so many and it is our turn to give back to her family in their time of need. We are raising money to cover the costs of the funeral and memorial services for Jessica’s family as this passing was completely unexpected. Any excess money will be donated to her son Josiah’s future care and education,” Simone’s family said in a GoFundMe post. “She was a graduate of North High School Class of 2004. Jessica was pursuing a career as a radiology technician at Quinsigamond Community College and would have been a graduate in May of 2022. She worked as a hairstylist for 15 years at the Hair Cuttery, most recently know as Unity Salon.”

“Jessica was a blessing to her whole family especially her son. She was a great mother who enjoyed doing anything and everything with him,” the obituary added. The GoFundMe has so far raised more than $25,000.

The family also noted that Simone was “predeceased by her father Kevin Harkins,” whom MassLive identified as a 1994 murder victim. The complex case was long and winding, but it ultimately led to the murder convictions in 2014 of three men: John Fredette, Matteo Trotto, Elias Samia. The prosecution said that Harkins, 36, was kidnapped on Feb. 15, 1994 and was murdered when he “reneged on his agreement to give false statements in the drug trial of John Fredette in exchange for a large quantity of cocaine.”

“His disappearance sparked an intense investigation, but police never recovered his body. He was declared dead in 2008 in Worcester Probate and Family Court,” the Worcester County DA’s summary of the case says. Jessica Simone was 7 years old at the time of Harkins’ murder.

Another car crash in Massachusetts killed a Worcester resident as recently as last Friday afternoon. The rollover crash on I-90 ejected 34-year-old Danielle Wysote from the vehicle. The crash occurred near the Massachusetts Turnpike’s Charlton rest area, around half an hour away from Worcester. Wysote died at UMass Memorial Medical Center. A minor female passenger was reportedly not injured.

Wysote was a wife and mother of two.

“Hi my name is Amanda, and Friday night we unexpectedly lost my sister Danielle in a car accident. This was an unexpected and tragic loss, my sister left behind a husband and 2 young children. All proceeds will go to give Danielle the best service that she deserves. Danielle’s smile could light up a room, she had a heart of gold and would do anything for anyone. Danielle loved her family and would literally give her life for them. My family truly appreciates all donations that are given,” said a GoFundMe post by Wysote’s sister. The campaign has raised more than $5,500 since it was started on Monday.