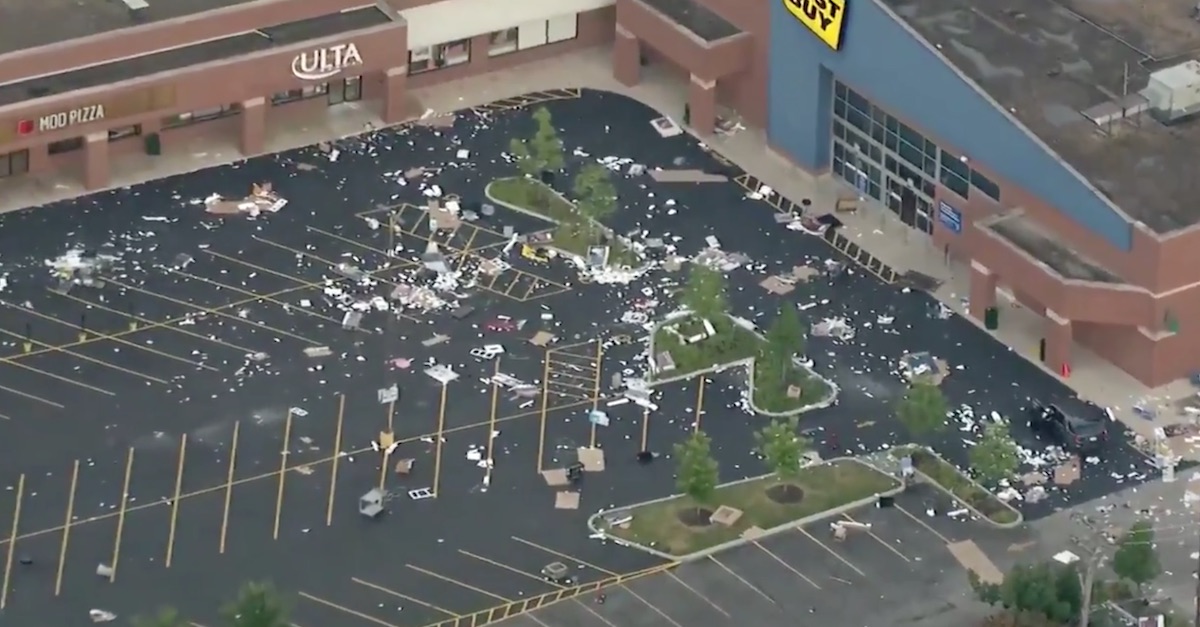 Photo shows aftermath of looting in Goose Island neighborhood of Chicago, roughly a 10-minute drive from the Magnificent Mile.

“We are coming for you!” – @chicagosmayor @LoriLightfoot to looters who ransacked stores downtown and along the Magnificent Mile in #Chicago overnight. @WBBMNewsradio pic.twitter.com/taugT9yq0b

“This was an assault on our city,” she said on Monday.

Police Superintendent David Brown told reporters in a press conference on Monday that the looting was prefaced by an officer-involved shooting in the Englewood neighborhood on Sunday. As previously reported, a man allegedly had a gun, and fled officers. He allegedly turned toward cops and opened fire. The authorities shot back. The suspect survived, but the incident left neighborhood tensions running high.

Brown on Monday said CPD were aware of social media posts encouraging looting downtown. 400 officers were dispatched to scene. 13 cops were injured, including one who sustained a broken nose fighting with a group of looters, he said. He said this was not an organized protest, but an “incident of pure criminality.”

The Gold Coast is being looted right now. What the hell is going on @chicagosmayor ? 3:11am. WTF! pic.twitter.com/SF0x4q6LIb

Chicago streets flooded by looters. Came in cars. Rampant looting of all luxury stores in downtown. I made this video from my room pic.twitter.com/AuNgkpA7dm

From overnight in Chicago … vehicle attempts to break glass at Dior store on Rush & Walton as crowd waits. @WGNMorningNews (video via @wolffbrit) pic.twitter.com/i69wYXcW2v

The destruction was not limited to the Magnificent Mile (see: video out of the Goose Island neighborhood):

Police are reviewing footage from last night, he said. There will remain heavy police presence throughout the downtown area, with officers set to 12-hour shifts, and days off canceled.

Mayor Lori Lightfoot on Chicago looting: “I don’t care, I do not care, whatever justification was given for this. There is no justification for criminal behavior, ever. You have no right to take and destroy the property of others. Our residents deserve to be safe.”