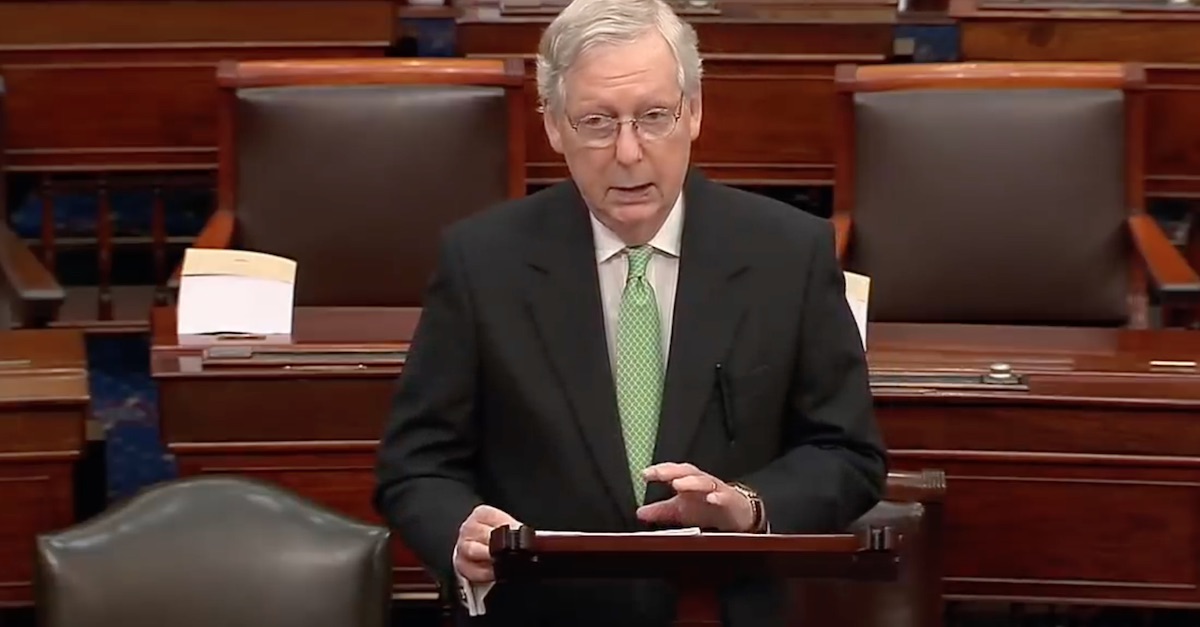 Speaking from the Senate floor Tuesday morning, McConnell derided the House of Representatives’ handling of the impeachment proceedings, calling the resulting work product “slapdash” and the process the “most unfair” in U.S. history.

McConnell says having these live witnesses as Schumer suggests would create a “nightmarish precedent” for the Senate, arguing it’s not the role of the Senate to do fact-finding and investigating

McConnell, who has already said on Fox News that there is no way President Trump will be removed from office (i.e. Trump will be acquitted), said it’s not the job of the Senate to “leap into the breach and search desperately for ways to get to guilty.”

“The fact that my colleague is already desperate to sign up the Senate for new fact-finding […] which House Democrats themselves were too impatient to see through, well, that suggests something to me,” he said. “It suggests that even Democrats who do not like this president are beginning to realize how dramatically insufficient the House’s rushed process has been.”

McConnell said he still hoped to pursue an in-person conversation with Schumer, and suggested a template similar to that used in the impeachment trial of former President Bill Clinton. During the Clinton proceedings, the Senate agreed to hear arguments from the prosecution and the defense before voting on whether to call witnesses.

McConnell’s announced his decision not to allow the proposed witnesses despite a growing bipartisan consensus among voters – including two out of three Republicans — that the White House officials should testify.

Yes, attitudes toward impeachment are partisan. But as @danbalz & @sfcpoll write: “Bipartisan majorities, including almost 2 in 3 Republicans, also say [#Trump] should allow his top aides to testify, something he blocked during the House inquiry.” https://t.co/RZXgS7pzF0

Schumer immediately responded to McConnell’s diatribe with a floor speech of his own.

“Trump has something to hide – that’s why he won’t let the witnesses [Sen. Schumer] requested testify,” Vance wrote in response to the controversy. “Schumer suggests McConnell is participating in a cover up if he won’t conduct a fair trial and notes that all senators will have to go on record as to whether they support this deficient process.”

Trump has something to hide-that’s why he won’t let witnesses @SenSchumer requested testify. Schumer suggests McConnell is participating in a cover up if he won’t conduct a fair trial &notes all senators will have to go on record as to whether they support this deficient process.

Vance was not alone in her assessment, as Supreme Court litigator and former acting U.S. Solicitor General Neal Katyal referred to McConnell’s decision as a “cover up.”

Cover up https://t.co/D9VLQGu4kZ via @NYTimes

Schumer on Tuesday afternoon also accused of McConnell of participating in a cover-up.

“What is Leader McConnell afraid of? What is President Trump afraid of?” Schumer asked. “The American people know what’s happening here.”