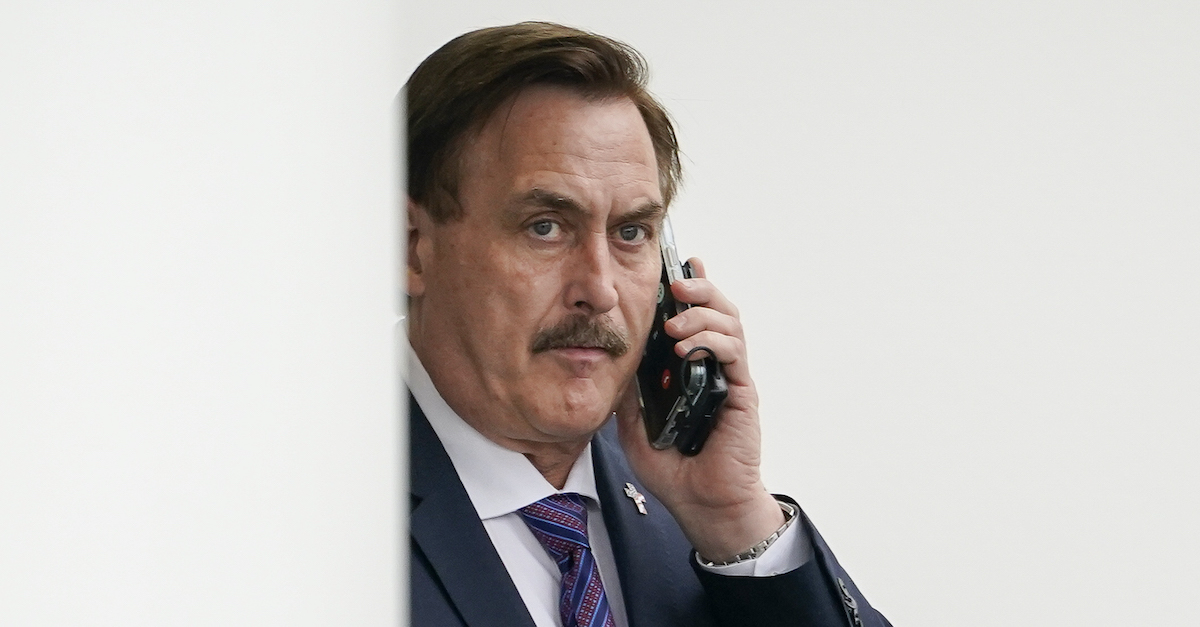 MyPillow CEO Mike Lindell waits outside the West Wing of the White House before entering on January 15, 2021. (Photo by Drew Angerer/Getty Images.)

MyPillow salesman and Donald Trump booster Mike Lindell lost his bid for the return of his seized cell phone on Thursday.

In a lengthy and emphatic ruling, a Trump-appointed federal judge also refused to order the government to stop scrutinizing the records for their ongoing criminal investigation — and rejected a separate motion to let Lindell see the search warrant materials supporting that search.

“Plaintiffs cannot show a likelihood of success on the merits of their claims for another important reason—that Plaintiffs impermissibly seek to rely on this Court’s equitable jurisdiction to enjoin a federal criminal investigation,” U.S. District Judge Eric C. Tostrud wrote in a 36-page opinion and order.

Thursday’s ruling was long-anticipated since Tostrud rejected Lindell and his attorney Alan Dershowitz’s request for a temporary restraining order in September, citing Trump’s defeat in the 11th Circuit on similar legal theories.

Lindell and his company sued the FBI a week after agents seized his cell phone at a Hardee’s fast food drive-thru lane in Mankato, Minnesota, on Sept. 13, 2022. The MyPillow honcho said he’d been returning from a duck hunting trip with his friend in Iowa, when agents questioned him on a variety of topics and took his company-issued phone.

The interview lasted between 40 and 45 minutes, he says.

Though Lindell’s lawsuit alleged an array of constitutional violations — including his First Amendment rights to freely associate, his Fourth Amendment protections against unreasonable searches and seizures, and Fifth Amendment due-process safeguards — Tostrud tossed each of these arguments aside in turn.

Since the 2020 presidential election, Lindell has been a wellspring of conspiracy theories explaining Trump’s defeat, and his free speech argument claims that the government is looking into his audit of the results. But the judge noted that agents are looking into possible violations of federal law, not Lindell’s professed beliefs.

“At best, Plaintiffs allege that the Attorney General ‘threatened criminal and civil actions against those who pursue audits of voting tabulations if those audits run afoul of federal laws,'” the judge wrote, italicizing those words in his ruling. “This is not the Government threatening retaliation for speech or affiliation. It is the Government threatening criminal actions against people who are alleged to have violated federal law in their efforts to pursue audits of voting tabulations.”

Rejecting Lindell’s claim that he was searched on the basis of a “general warrant,” the judge added: “Plaintiffs have not shown, and are not likely to show, a Fourth Amendment violation.”

Tostrud flatly rejected the suggestion that agents withheld information from the search warrant application in order to obtain the data. The judge also noted that no charges have been filed against Lindell.

“Plaintiffs have not brought a motion to suppress evidence, nor could they, in the absence of a criminal indictment,” the opinion states. “And Plaintiffs have not stated claims under any other overarching legal theory that would allow them to vindicate their constitutional rights.”

The ruling circles back to that key point repeatedly.

“If criminal proceedings are instituted against him, Lindell will have an adequate remedy to challenge the search, such as filing a motion to suppress any purportedly improperly seized evidence,” the opinion states.

Lindell said that he operates five businesses from his cell phone, and according to the opinion, he claimed that his “businesses and health will be adversely affected” by his inability to use it.

“These assertions are not persuasive,” the judge found. “Lindell himself has admitted that the contents of his cellphone were backed up only days before the warrant was executed. […] He thus should have access via backup to all but a few days’ worth of business information. Moreover, Lindell’s ‘[s]imple unsupported allegations of business disruption or speculations as to future harm are not sufficient to establish irreparable injury.'”

Lindell’s attorney did not immediately respond to a request for comment.