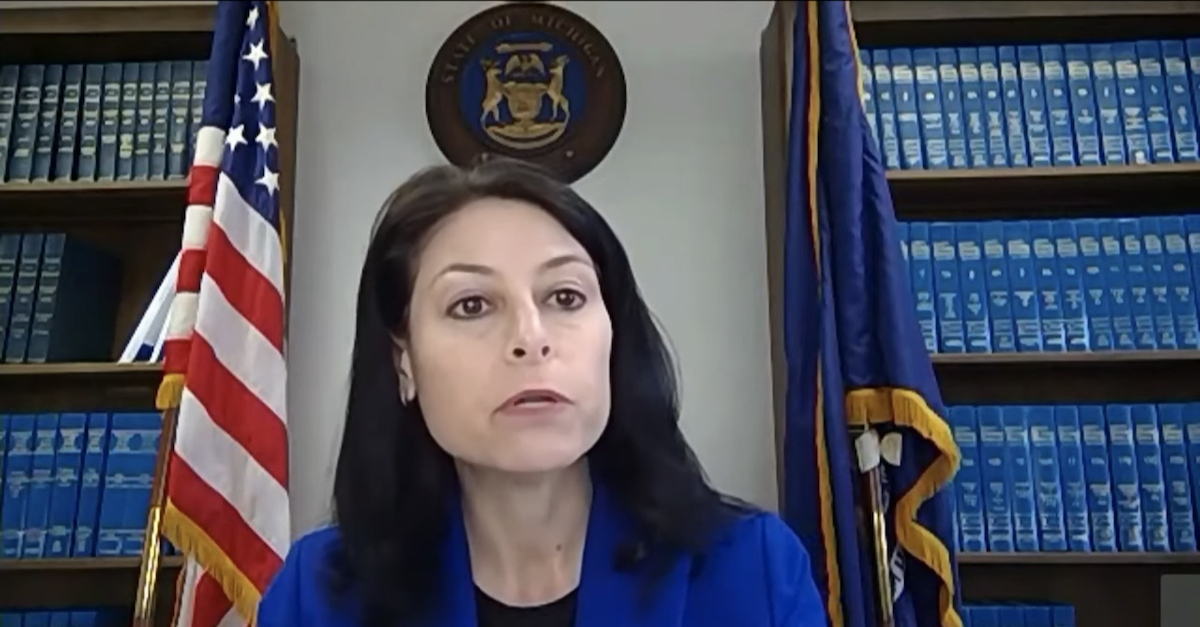 Describing her state as “ground zero for anti-government militia extremism,” Michigan Attorney General Dana Nessel (D) kicked off witness testimony for the first hearing of the House Homeland Security Subcommittee on Intelligence and Counterterrorism on Wednesday.

“Now, while Michigan has a robust array of laws to address domestic terrorism, many states and federal prosecutors do not,” Nessel noted.

Democratic Rep. Elissa Slotkin, a former CIA analyst representing a district that includes Michigan’s capital of Lansing, had invited Nessel to testify for a hearing titled “State and Local Responses to Domestic Terrorism: The Attack on the U.S. Capitol and Beyond,” the debut proceedings of the subcommittee that she chairs.

In her opening remarks, Nessel summarized her state’s history with domestic extremism that led her state to adopt laws to clamp down on it, from Oklahoma City bomber Timothy McVeigh’s ties to the Michigan Militia to a more recent kidnapping plot by at least 14 men against Gov. Gretchen Whitmer (D).

“The group spied on Gov. Whitmer’s vacation home, conducted firearms and combat training, and practiced building explosives,” Slotkin noted in her prepared remarks. “They planned to detonate a bomb under a highway bridge to distract local authorities as they kidnapped the governor, and relocate her to Wisconsin to conduct a ‘trial.’ These plotters weren’t affiliated with al Qaeda or ISIS; they didn’t hail from a war-torn region halfway around the world—they were Americans.”

Nessel charged eight of the suspects with “providing material support for terrorist acts” and two of those with additional counts of “threat of terrorism.”

In her testimony, Nessel called for federal analogues for her state’s domestic terrorism statutes.

“I want to emphasize that cure is a messaging crime,” Nessel testified. “Domestic terrorists seeks to send a message of fear, to intimidate and coerce the conduct of government, all government. Governments must send its own message back by labeling extremist violence as domestic terrorism. Labels matter. Prosecuting hate-motivated attackers as terrorists sends the clear message that the threat of extremism is just as significant when it is based on domestic, political, religious or social ideologies, as it is when it’s based on violent jihadism.”

“The phrase ‘lone wolf’ has been used to reference many culprits of mass violence who are usually white,” Ford, who is Black, noted. “Calling someone a ‘lone wolf’ implies that they are not terrorists, because they are not connected to a state sponsor of terrorism or a group organized around a group ideology.”

Nevada’s law does not have this requirement, and the state’s domestic terrorism could have been deployed against the perpetrator of the 2017 Las Vegas shootings, Ford noted.

“However, had the perpetrator of the 2017 mass shootings survived, he likely would have been charged as a terrorist, under Nevada law,” Ford noted. “Nevada law’s revised statutes defines acts of terrorism and creates criminal penalties for acts of terrorism or attempted acts of terrorism. This law was passed in the aftermath of 9/11 it is proven to be a powerful tool for Nevada in charging terrorists. Nevada’s terrorism statute does not require us to prove hate, political ideology, or other motivation. Nevada law defines terrorism as sabotage corrosion or violence which is intended to ’cause great bodily harm or damage to the general population.'”

Slotkin noted that events like those have become increasingly common in the U.S. national backdrop.

“Before we begin, I’d like to take a moment to acknowledge the horrific violence we’ve seen in Atlanta and Boulder over the past week,” Slotkin noted in her opening remarks earlier in the hearing. “I know we’re all grieving for the 18 Americans going about their daily lives, at a spa or the supermarket, who have been senselessly torn from their families. Now, this Subcommittee is charged with combatting domestic terrorism and violent extremism — united by the conviction that we simply cannot allow violence to be normalized as a part of our politics. But we have to acknowledge that we’ve allowed these monstrous acts of mass violence to become normalized as a part of our society.”

Critics on the left and right have feared that creating a domestic terrorism statute analogues to those used against foreign terrorist organizations could spell a civil liberties disaster matching the excesses of the post-Sept. 11, 2001 War on Terror. The witnesses were grilled about how to mitigate those concerns.

“It’s a very real concern and it’s appropriate to have these conversations,” Nevada Attorney General Ford said. “As a Black man, frankly, I live for the opportunity to bring this to the forefront. We have to consider implicit and explicit biases throughout the criminal justice system.”

For Ford, this also includes a statutory scheme that currently punishes immigrant and minority communities more harshly than white suspects.

“It would seem strange that the Oklahoma City bomber wasn’t charged with terrorism,” Ford said.

Michigan’s attorney general testified that visions of civil libertarian abuses have not panned out in her diverse state, where domestic terrorism statutes have been on the books for decades.

“We have not seen egregious violations of civil liberties and constitutional right,” she said.

Just north of the Michigan border, Canada has declared the Proud Boys a terrorist organization.

“I don’t think the most important thing is new legislation,” Goelman said. “I think it is government focus on the threat of right-wing extremism.”

The U.S. intelligence community, in a report co-signed by the Director of National Intelligence, Department of Homeland Security, Justice Department, recently found that domestic extremists will “almost certainly” attempt violence this year, and racially motivated extremists are “most likely to conduct mass-casualty attacks against civilians.”

Update—March 24 at 10:58 a.m. CT: This story has been updated to add reporting about the hearing’s conclusion.

(Screenshot from the House proceedings)