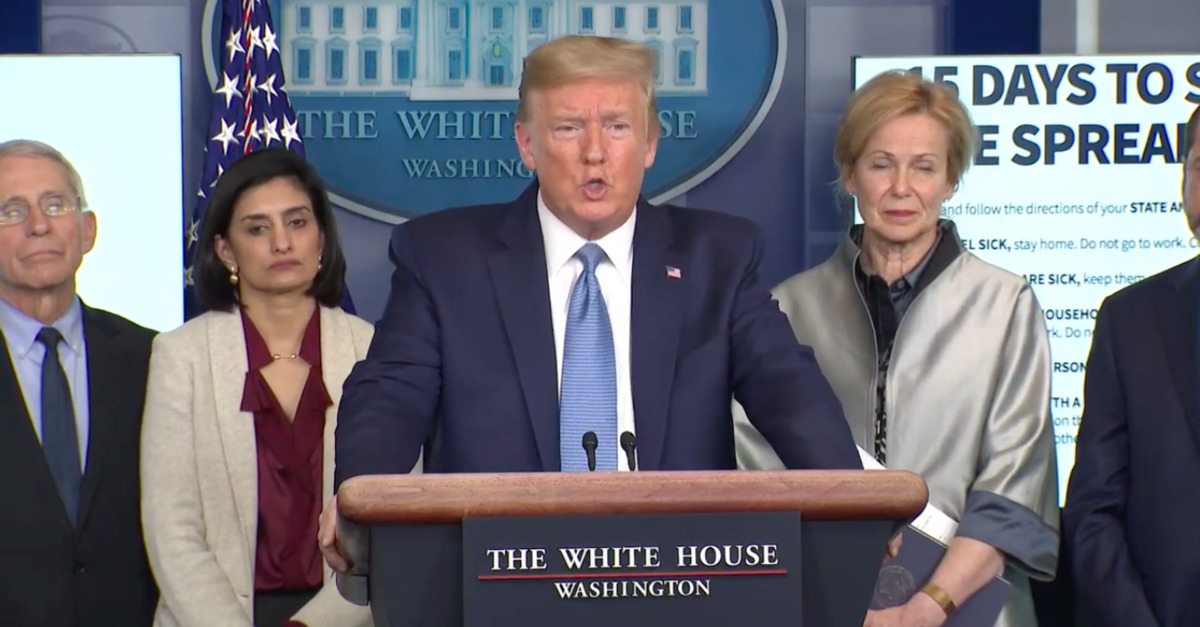 When President Donald Trump addressed the nation late Monday afternoon, he advised people to avoid gatherings of 10 or more in order to arrest the spread of the novel Coronavirus (COVID-19). He also said he was personally tested for infection—but many didn’t believe him because of the way he talked about the test.

When asked by a reporter how it felt to take the test, the 45th president gave the following halting and somewhat rambling response:

The Coronavirus test, however, uses a simple cotton swab to collect samples from a person’s nose—and maybe via the back walls of the throat. Patients who exhibit a wet cough symptom might also be asked to cough up a bit of saliva and mucous. The entire process should only take a few seconds.

Here’s how the Centers for Disease Control (CDC) describe the preferred testing method:

For initial diagnostic testing for COVID-19, CDC recommends collecting and testing an upper respiratory nasopharyngeal swab (NP). Collection of oropharyngeal swabs (OP) is a lower priority and if collected should be combined in the same tube as the NP. Collection of sputum should only be done for those patients with productive coughs. Induction of sputum is not recommended. Specimens should be collected as soon as possible once a PUI is identified, regardless of the time of symptom onset. Maintain proper infection control when collecting specimens.

So, well, naturally people are suspicious.

White House counselor Kellyanne Conway’s anti-Trump husband George also, of course, couldn’t resist the opportunity to get a dunk in.

“Trump is just so unbelievably bizarre,” he tweeted in response to the president’s alleged displeasure with allegedly being tested.

[G]uys I don’t think he took the test,” deadpanned Rogue One screenwriter Gary Whitta via Twitter.

The responses to this effect seemed endless.

It's a freaking nasal swab!

Either Trump got some other test that was much more traumatic [and not a coronavirus test] or he's lying [as usual] about getting tested. https://t.co/7qaSxoxk0f

He's lying about being tested

As we expected. Sounds like Trump lied about bein’ tested. https://t.co/2Rwnh0wkHE

Others went a bit bolder with their disdain.

“He always has to pause and interrupt his flow because frequent liars can’t recall all their lies,” argued environmental activist and businessman Ibrahim Al Husseini via Twitter. “They have to pause and assess their next words to make sure they aways covering the lie. He does it all the time. Watch him every time he is not reading off a teleprompter.”

I’ll never understand how those who continue to question the validity of Obama’s birth certificate – backed up by city, state and hospital records going back decades – simply believe Trump at face value and have NO DOUBT WHATSOEVER he’s telling the truth here 🤔

Poll numbers indicate that Americans are—in large and somewhat vacillating numbers, and for their own reasons—not quite buying what the government has been selling viz. the Coronavirus. And as Law&Crime previously reported, the confusion over Trump’s Coronavirus test began late Friday, then continued into Saturday.

A White House doctor said late Friday that there was no test, then Trump told press on Saturday that he was tested. Later on Saturday, White House physician Sean Conley said the test came back negative.

All of that followed repeated questions from the media about whether the president was going to be tested for COVID-19 after potentially being exposed to individuals who later tested positive for the virus. Still, the reaction to the Monday presser suggests that for many the confusion hasn’t entirely been cleared up.