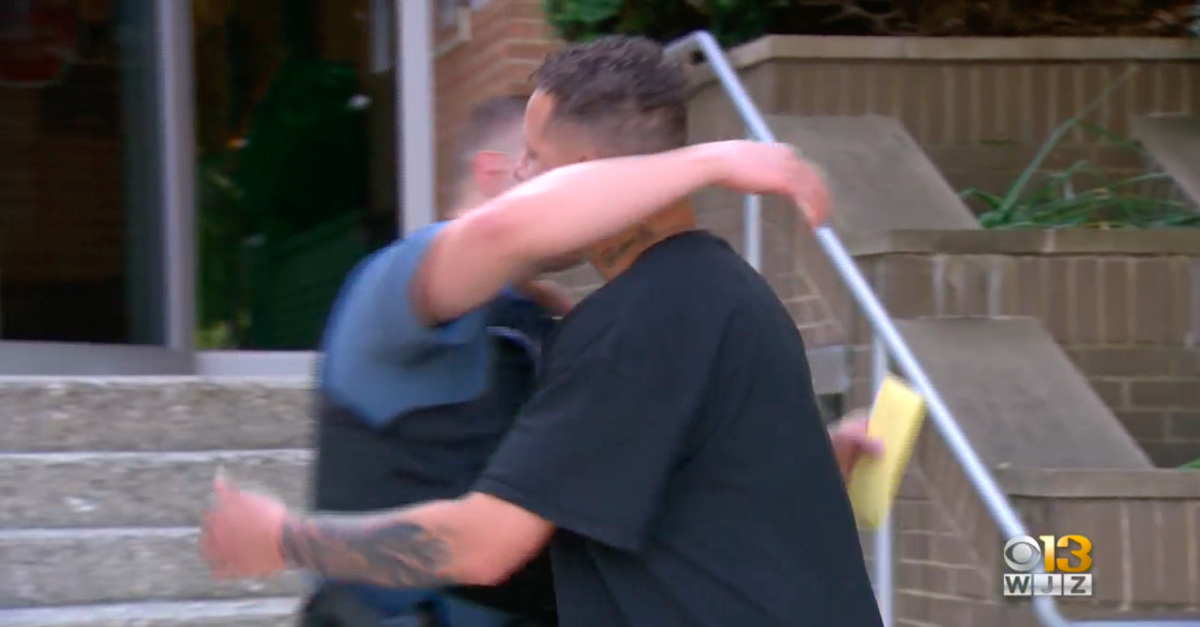 Jeff McGuire embraces Pat Hannigan, the police officer who saved his life when he pulled him from a burning car early Sunday.

A man who was pulled from a fiery car wreck in Maryland over the weekend had the opportunity on Thursday to meet and thank the police officer whose heroic actions saved his life.

Jeff McGuire on Sunday was driving on Interstate 97 at approximately 2:30 a.m. when his car collided with another vehicle. According to reports from local news outlets, the accident didn’t initially cause any serious injuries to either of the drivers, but McGuire’s Honda Accord caught fire and his driver’s side door was pinned shut. The passenger’s side of the car was also aflame, blocking McGuire’s exit and leaving him trapped.

Anne Arundel County Police Officer Patrick Hannigan spotted the blaze and rushed to the scene, charging the vehicle that was already engulfed in flames, and pulled McGuire from the fiery crash.

“I got there. I saw the car and the only thing I thought was I need to get this person out,” Officer Hannigan told CBS affiliate WJZ.

AACOPD – This morning around 2:30 a.m. Eastern District Ofc. Hannigan pulled a driver out of burning vehicle on I-97. There were no serious injuries in the crash. We salute Ofc. Hannigan for his bravery and courage while serving our community. #Courage #ServiceOverSelf #WhoWeAre pic.twitter.com/VHGApbVX39

Following his near-death experience, McGuire reached out to the Anne Arundel County Police Department and asked if he could thank the man responsible for saving his life in person.

On Thursday, his request was granted and he greeted Officer Hannigan in front of the precinct with an emotional hug.

“He changed my life in a lot of different aspects and gave me a different outlook,” McGuire told WJZ. “I shouldn’t be walking away or alive at all and I am and I’m grateful for what he did.”

He also said the incident completely changed his perspective on police officers.

“I grew up not really liking cops at all but my outlook on cops is totally different now,” said McGuire.

Hannigan told McGuire he was happy he was able to help and later told WJZ that moments like that were why he joined the force in the first place.

“That’s why I became a police officer to do that and help save lives. Even if it’s 1 or 2 lives I’m able to touch that’s what really matters,” Hannigan said.

See the McGuire and Hannigan meet below.