The Gulf of Tonkin incident that never happened, babies being ripped out of incubators in Iraq, weapons of mass destruction in Iraq, rebels who supported democracy and an impending massacre of civilians in Libya. The pantheon of questionable claims, falsehoods and lies from intelligence officials may have a new companion: the story of Russian bounties on U.S. military personnel in Afghanistan.

According to the Daily Beast‘s Adam Rawnsley and national security reporter Spencer Ackerman: “Translated from the jargon of spyworld, that means the intelligence agencies have found the story is, at best, unproven—and possibly untrue.”

The report details how officials explained the apparent about-face:

According to the officials on Thursday’s call, the reporting about the alleged “bounties” came from “detainee reporting” – raising the specter that someone told their U.S.-aligned Afghan jailers what they thought was necessary to get out of a cage. Specifically, the official cited “information and evidence of connections to criminal agents in Afghanistan and elements of the Russian government” as sources for the intelligence community’s assessment.

Reporting from The New York Times and Washington Post based on the Russian-bounty assertions dogged Trump on the campaign trail, but the walk-back suggests the former president’s skepticism may have been warranted.

“There is no reason to ever believe anything the ‘intel community’ says,” Dunman tweeted.

The White House walked back the claims just a day after favorably citing that bad intelligence as one reason to support new sanctions against several Russians.

The Biden administration claimed the new information about the fake bounties storyline “puts a burden on the Russian government to explain its actions” in Afghanistan.

“From the Gulf of Tonkin to claims about weapons of mass destruction, deception has been used to promote U.S. wars abroad,” attorney and researcher Chip Gibbons added. “For many in the national security state, it is never a bad time to escalate military conflict and never good time to end one. That is why it is vital that the press rigorously interrogate claims from government officials or the intelligence community when they are trying to prolong or provoke military intervention. Too often, journalists instead act as their stenographers. The ‘Russian Bounty,’ which always raised questions, appears to be the latest example of this.”

American intelligence officials have concluded that a Russian military intelligence unit secretly offered bounties to Taliban-linked militants for killing coalition forces in Afghanistan — including targeting American troops — amid the peace talks to end the long-running war there, according to officials briefed on the matter.

Then-president Donald Trump said the story was “all a made up Fake News Media Hoax started to slander me & the Republican Party” at the time. In response, various startup and legacy media outlets including Axios, the Washington Post and NBC News made efforts to fact check the 45th president and other members of his administration who disputed the Times‘ reporting.

“The only people dismissing the Russia bounties intel: The Taliban, Russia and Trump,” read a representative headline from the Post‘s Aaron Blake last summer.

Specifically, Trump was concerned with claims in the initial reporting that he had been briefed on the matter but chose not to take action.

Media outlets, commentators and members of the Democratic Party–exemplified by Sen. Tammy Duckworth’s (D-Ill.) outrage–framed the implications of the story as such: Trump was a Russian stooge who was allowing Vladimir Putin to threaten the lives of U.S. troops for an unknown reason. The charge held the echoes and shapes of treason and betrayal. 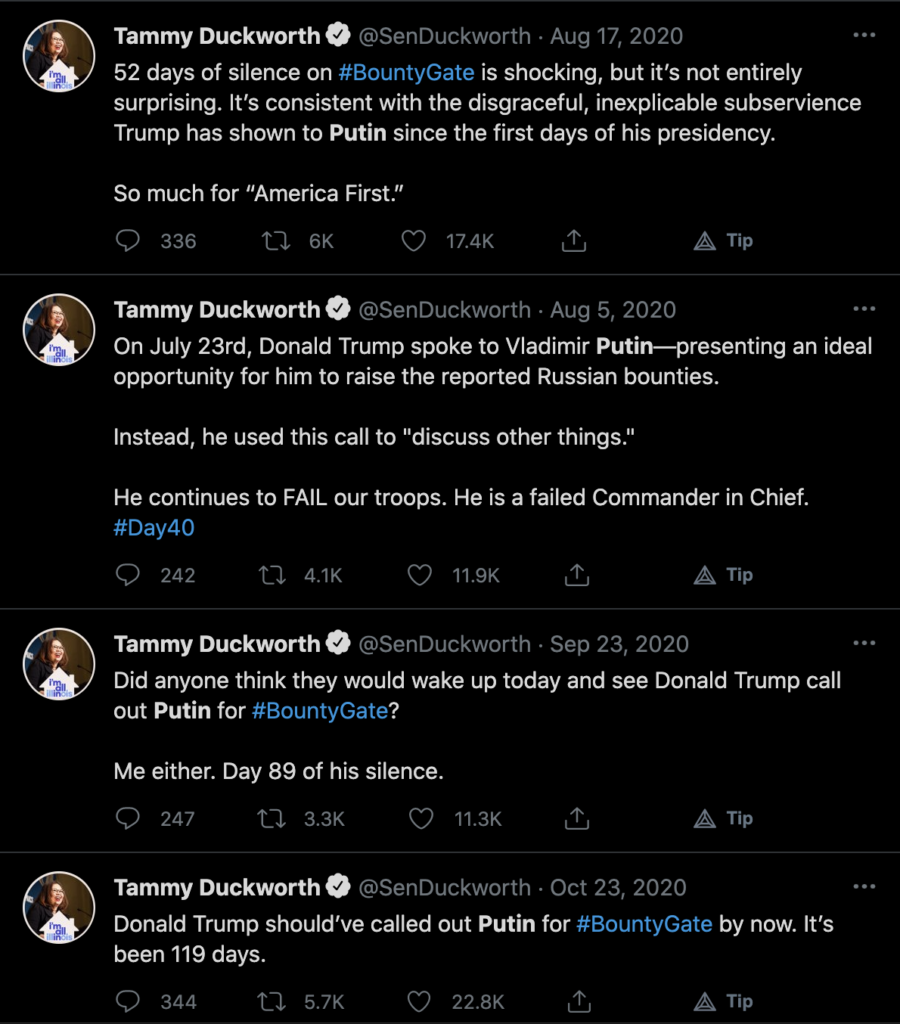 Rep. Adam Schiff (D-Calif.) also took to national media, asserting that Trump was the only person who was not “outraged” by the intelligence community’s since-walked back assessment.

“We want to know, are the Russians offering bounties to kill American troops?” he asked during a roundtable discussion on NPR. “Is this an issue where they cannot tell the president things he doesn’t want to hear when it comes to Vladimir Putin and Russia?”

“There should be [an] investigation into how this story was initially spread and any Member of Congress who used it for political gain, while either knowing better or having deliberately avoided learning more, should apologize,” famed whistleblower attorney Mark Zaid said via Twitter. “There should be no politics in [the] national security arena.”