Law Prof Told Trump to ‘F*** Off and Get to Work,’ Then the Georgia GOP Got Involved

The Georgia Republican Party was clearly not happy with Georgia State University College of Law decision to hire professor Anthony Michael Kreis, calling the decision “disgusting” after Kreis posted a tweet Tuesday morning telling President Donald Trump to “F*** off and get to work.”

“WOW. It’s disgusting that Georgia taxpayers will be paying for this clown!” the official Twitter account of the Georgia Republican Party said–including screenshots of both the “f*** off” tweet and Kreis’s pinned tweet announcing he was “thrilled” to have accepted a tenure-track position at Georgia State Law.

Kreis has been an outspoken critic of President Trump, last year calling him a “boil on the butt of humanity.” Meanwhile, the Georgia Republican Party has staunchly defended the president against his critics and consistently felt free to criticize Democratic politicians such as Joe Biden, Kamala Harris, and Bernie Sanders.

Kreis, a constitutional law professor, said that the political party holding power in the state of Georgia was trying to “chill” his free speech.

“This wouldn’t be the Georgia Republican Party trying to chill free speech now would it? Yup. It would,” he responded.

This wouldn’t be the Georgia Republican Party trying to chill free speech now would it?

University of Iowa law professor Andy Grewal responded to the Georgia Republican Party’s tweet, writing, “there is something disgusting here but it’s not [Kreis].”

There is something disgusting here but it’s not @AnthonyMKreis. https://t.co/UBcTVkXdu6

“The real threat to free speech isn’t Berkeley undergrads,” Litman wrote, adding, “I know how much it stinks when people try to use your jr. position at a public university to threaten you & suggest you cannot voice opinions about politics.”

(1) I'm sorry @AnthonyMKreis is dealing with this BS.

(3) I know how much it stinks when people try to use your jr. position at a public university to threaten you & suggest you cannot voice opinions about politics. pic.twitter.com/Dai6kFhE85

I am oh so happy that @AnthonyMKreis will be an educator in the great state of Georgia. https://t.co/kmDE821Iy4

Amid all of this, Kreis said that the Georgia GOP account initially tweeted a version of its criticism with one clown face, only to delete the tweet and add two more.

My favorite thing about their tweet is they deleted the first version that only included one clown face because, upon reflection, I deserved three.

Others noted that the hashtag #choosefreedom is featured prominently on the Georgia GOP’s account. 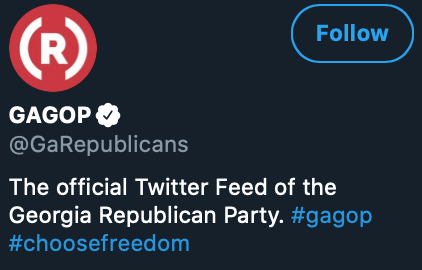