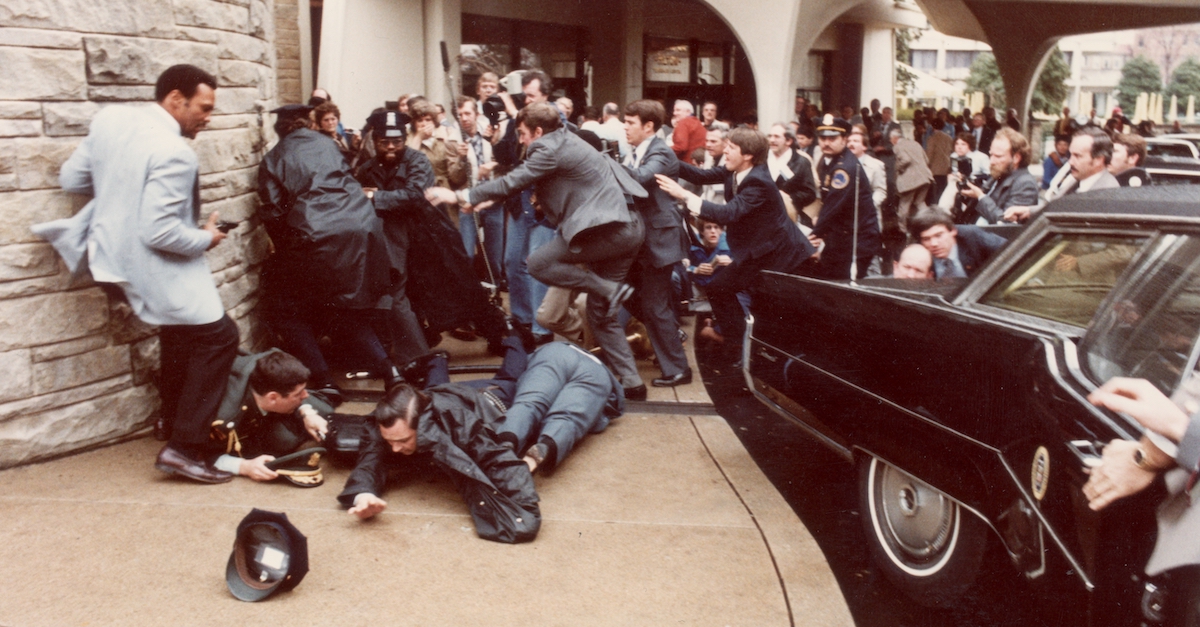 View of police officers and Secret Service agents as they dive to protect President Ronald Reagan amid a panicked crowd during an assassination attempt by John Hinckley Jr. outside the Washington Hilton Hotel, Washington D.C.

A federal judge on Monday granted the “unconditional” release next year of Ronald Reagan’s would-be assassin John Hinckley Jr., some five years after granting his full-time convalescent leave with conditions.

“If he hadn’t tried to kill a president, his release would have been unconditional a long, long, long, long time ago,” Senior U.S. District Judge Paul L. Friedman said.

On March 30, 1981, Hinckley shot and wounded the 40th president outside the Washington Hilton Hotel. Jurors found him not guilty by reason of insanity, finding that he needed treatment instead of punishment. He was 25 years old at the time of the assassination attempt, and he would spend 34 years following the trial committed to St. Elizabeth’s Hospital. He is now 65 years old.

“The most difficult decision was the first one,” Judge Friedman said, referring to the initial decision to release Hinckley in “incremental steps.”

On the day of the attack, Hinckley wrote her a letter saying that he would kill the president to impress her. He was diagnosed as having major depression and a psychotic disorder.

Judge Friedman issued his ruling during evidentiary proceedings on Monday.

“I would like to ask the court’s indulgence to make a comment that I think is appropriate,” Levine said in court. “That is to say that, Mr. Hinckley wants to express apologies, and his apologies are heartfelt and one of profound regret.”

The lawyer said that Hinckley extends those apologies to the Reagan family, as well as the families of Brady and McCarthy.

Separately apologizing on his client’s behalf to Ms. Foster, Levine added: “He apologies to the American people.”

Adding that asking for forgiveness may be “too much,” Levine added he hoped for their understanding.

Assistant U.S. Attorney Kacie McCoy Weston noted that Hinckley has been a unique patient of St. Elizabeth’s Hospital, in that no other one to her knowledge has attempted to assassinate a U.S. president.

A doctor working for Washington’s Department of Behavioral Health had recommended Weston’s unconditional release, but Weston added that another government expert, Dr. Mitchell Hugonnet, recommended prolonging Hinckley’s observation in light of his mother’s death and the departure of his therapist.

“We can speculate as to how Mr. Hinckley will adapt to these changes, but why should we?” Weston asked.

She argued this was especially prudent in light of Hinckley’s psychological predisposition.

“Mr. Hinckley does have a history of turning inward and toward isolation,” she said.

Despite agreeing that the court record would support a finding of conditional release, prosecutors recommend a nine-month stay for further observation.

“At this point, the ball is in Mr. Hinckley’s hands,” Weston said.

Judge Friedman appeared skeptical of the need for delay: “This nine months is not a magic number,” the judge said.

The prosecutor agreed that was true. The judge nonetheless agreed to make the unconditional release effective June 2020.

Judge Friedman said he would issue a written order later this week.