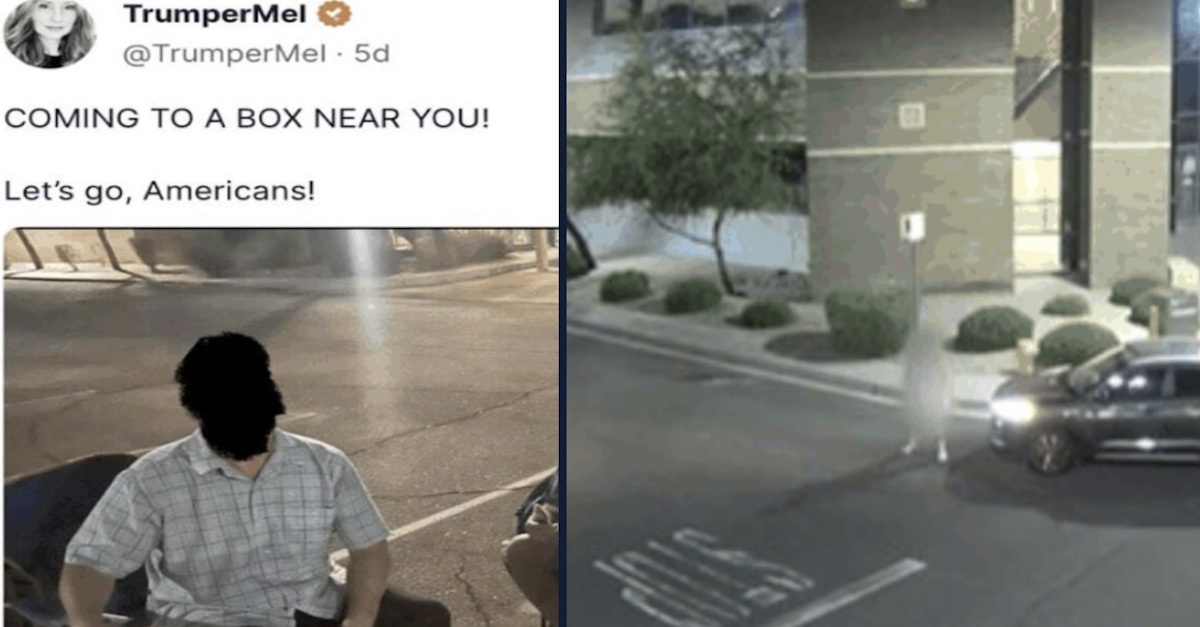 These images from a federal lawsuit warned of election “vigilantes” in Arizona. (Photos via court papers)

The day after the Department of Justice warned that monitoring at Arizona drop boxes could rise to voter intimidation, organizers of ballot-watchers described by election officials as “vigilantes” reached an extensive agreement paring down their operation.

Signed by a federal judge on Tuesday night, the agreement bars gathering within 75 feet of drop boxes to watch voters or photographing them within that distance. Flashing firearms or body armor within 250 feet is also banned, and pro-Donald Trump organizer Melody Jennings, the founder of an entity called Clean Elections USA, must correct election misinformation that she posted on Truth Social.

After that message, Clean Elections USA and Jennings must share a “copy of the entire statutory text of Arizona Revised Statutes § 16-1005.”

“Any past statement that it is always illegal to deposit multiple ballots in a ballot drop box is incomplete; a family member, household member, or caregiver can legally do so.”

The messages must remain posted until the close of the polls on Election Day.

Signed by U.S. District Judge Michael Liburdi, a Trump appointee, the temporary restraining order has been agreed upon by both parties and is carefully worded. It does not require Clean Elections USA or Jennings to admit liability and bans would-be monitors from “[i]ntentionally” violating some the rules that it outlines and only bans carrying firearms “[o]penly” within 250 feet of drop boxes.

The development marks a sudden reversal in a litigation over drop box monitors.

Late last week, Judge Liburdi refused to grant the relief that he just ordered, finding that he could not square it with the First Amendment. The non-profit groups that filed that lawsuit — Arizona Alliance for Retired Americans and Voto Latino — had appealed that ruling to the Ninth Circuit.

Then, another non-profit, the League of Women Voters of Arizona, filed a separate lawsuit that won support from the Justice Department on Monday.

“Other vigilante ballot security efforts that threaten to subject voters to adverse consequences, including harassment, ‘public opprobrium,’ and baseless allegations of felonious conduct for voting or attempting to vote can run afoul of Section 11(b),” the Justice Department wrote, referring to a subclause of the Voting Rights Act.

After the Justice Department’s appearance, the organizers of the monitors quickly reversed their posture. They entered into a stipulated temporary restraining order on Tuesday.

The message that Jennings has now been forced to disseminate is sharply different from her posts stoking baseless fear of so-called ballot “mules.”

Taking its root from the film “2000 Mules,” the debunked conspiracy theory about ballot mules comes from right-wing academic Dinesh D’Souza’s unfounded claim that cell phone data showed an effort to traffic fraudulent ballots to drop boxes. That notion was discredited by former Attorney General Bill Barr, who laughed at the theory while poking holes in it to the Jan. 6th Committee.

“Today’s U.S. District Court decision is a victory for the voters of Arizona who have the right to cast their ballots free from intimidation, threats, or coercion,” Sheoran wrote in a statement. “The League of Women Voters of Arizona is proud to have challenged activities that are presently interfering with voters’ right to cast a ballot safely and without fear, and we encourage voters to continue using drop boxes to vote.”