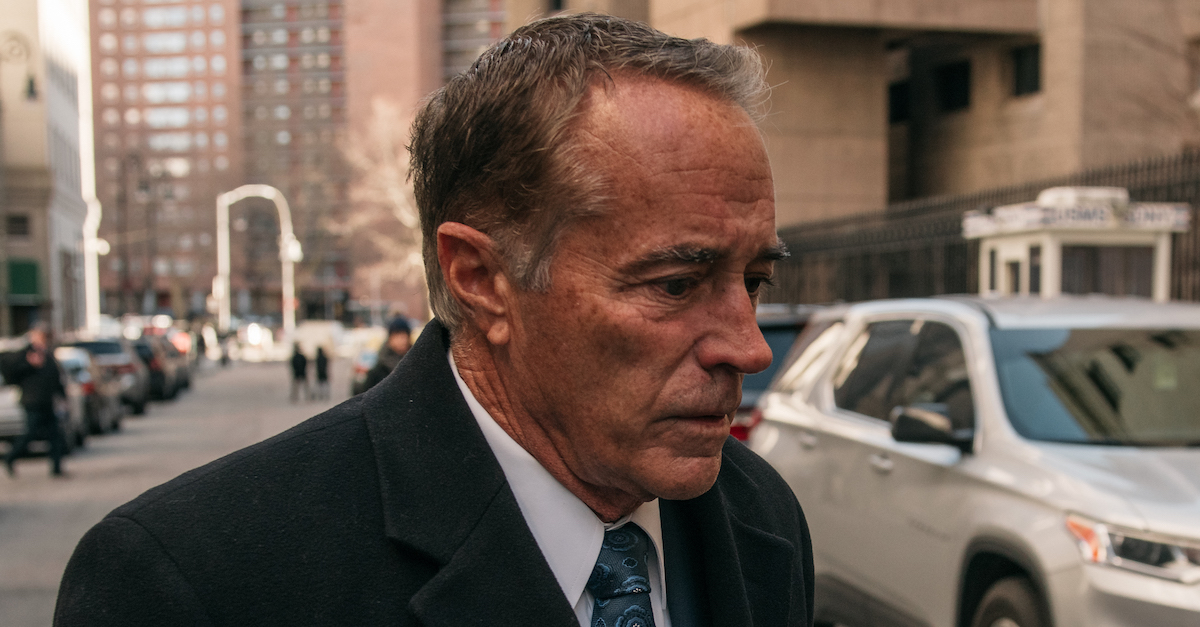 A former Republican congressman in New York, famously the first member of Congress to endorse Donald Trump for president, will not begin his 26-month prison sentence until at least June. Lawyer for Christopher Collins asked U.S. District Judge Vernon Broderick to permit months of delay in incarceration, given the threat of COVID-19.

Notably, federal prosecutors did not object to the request. Collins had been on track to begin a prison stint for incarceration on April 21.

The argument from Collins’s lawyers was basically this: the coronavirus pandemic is serious and Collins is at a higher risk of death, so he shouldn’t be placed in prison right now.

Since the filing of the last motion to continue Mr. Collins’ Report Date, the impact of the new strain of coronavirus which causes COVID-19 greatly worsened, prompting the World Health Organization, on March 11, 2020, to officially classify COVID-19 as a pandemic. As of this morning, Johns Hopkins University reports more than 877,000 confirmed cases of COVID-19 worldwide and more than 43,000 deaths. It reports that the United States currently has the largest number of confirmed COVID-10 cases at 189,633, and reports more than 4,000 deaths in the United States from the disease. New York Governor Cuomo declared a State of Emergency on March 7, 2020, and on March 20, 2020, ordered all nonessential businesses to close and residents to stay home. On March 13, 2020, President Trump declared a National Emergency. More than half of states have now imposed lockdown measures restricting gatherings and social
contact. Florida Governor DeSantis declared a State of Emergency in Florida, the state where Mr.Collins resides, on March 9, 2020. Dr.Deborah Birx, the White House coordinator for the virus response team, has warned of the expected dire consequences of the pandemic stating that even if all social distancing guidelines are followed “perfectly,” the nationwide death toll could reach 100,000 to 200,000.

The Centers for Disease Control and Prevention (“CDC”) has issued guidance identifying individuals at higher risk of contracting and suffering severe illness from COVID-19 as those who are 65 and older or those who suffer from a variety of chronic health conditions including chronic lung disease or moderate to severe asthma and serious heart conditions. Moreover, it has been widely reported that patients with hypertension appear to be at a higher risk of dying from the coronavirus. As detailed in the Revised Pre-Sentence Report dated December 23, 2019. (“PSR”), Mr. Collins is older than 65 and has additional risk factors, which place him at a high risk of contracting and suffering severe illness from COVID-19 if exposed to the virus. See PSR ¶ 99. It would be particularly dangerous for an elderly person with underlying health conditions like Mr. Collins to report for incarceration right now in the middle of the COVID-19 pandemic that is ravaging the United States.

Judge Broderick pushed back the prison reporting date to June 23, as the defense lawyers requested.

Collins resigned from Congress in Sept. 2019, one day before pleading guilty and more than a year after he was indicted in August 2018.

Collins admitted that, through his position on the board of directors for pharmaceutical manufacturer Innate Immunotherapeutics Limited, he provided his son Cameron Collins with non-public information about the poor results of a trial test for one of the company’s drugs. Cameron used that information to illegally trade on the stock, avoiding a loss of approximately $570,900.

“The cynicism of Collins’s conduct – his decision to repeatedly violate federal law while continuing to accept the trust of the public to draft it – is exacerbated by its total gratuitousness. Collins committed a financial crime without having any financial need,” prosecutors said. “Congressman Collins’s personal assets include, among other things, a baseball card collection and a coin collection each of which is worth $1 million. Collins could have ameliorated any concern he had that Cameron would lose money in Innate by simply gifting Cameron money. His choice to commit fraud instead, as if the two options were morally equivalent, bespeaks a total disregard for the rules that are intended to govern everyone’s actions. His subsequent lies to the FBI indicate the same disregard.”