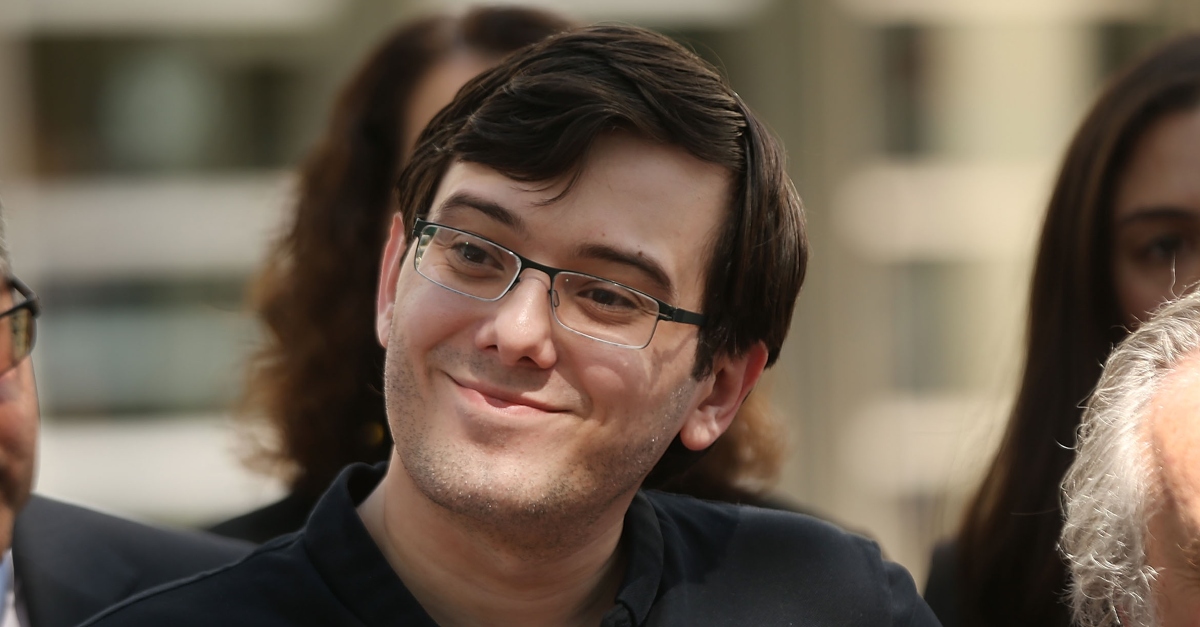 A former reporter for Bloomberg said she fell in love with “pharma bro” Martin Shkreli. The legal angle in all this is the detail that their email correspondence might have landed him more prison time. From Elle‘s new report on journalist Christie Smythe:

Reading Shkreli’s unremorseful correspondence with Smythe aloud, the judge sentenced him to seven years. Smythe remembers Shkreli telling her that his lawyer opined that the emails had added two years to his sentence, which Smythe says she feels sick about to this day.

Smythe’s account largely focuses on how the professional-personal boundaries became blurred amid her day job, and her plans to write a book about the former pharma exec. (She sold the movie rights to that book proposal in 2019.)

But we’re a legal website, and accordingly, we are more concerned about the legal angle. You may recall that Shkreli was sentenced to seven years in federal prison for securities fraud. He is best known for hiking the price of a live-saving drug, exchanging disrespect with the rapper Ghostface Killah, and failing to get out of prison by claiming he could cure COVID-19. Shkreli got to be pretty infamous. Even his attorney Benjamin Brafman quipped in 2018 about wanting to punch him in the face “because he’s made my job more difficult by some of the things he’s said.”

“There are times I want to punch him in the face, because he’s made my job more difficult by some of the things he’s said,” #MartinShkreli‘s lawyer Benjamin Brafman tells judge at sentencing.

Brafman declined to comment when Law&Crime reached out about the sentencing detail in the Elle report.

Smythe said she first spoke to Shkreli in early 2015, when she learned from a source that he was under investigation for violating securities law, and she reached out to him for comment. In this story, thus began a years long connection that grew more intimate and reached a number of turning points in the middle of 2018. In a sentencing memorandum, prosecutors cited the defendant’s jailhouse emails with an “Individual-1.” They argued that these message showed “any remorse [the defendant] may express publicly is a carefully constructed façade.”

Smythe said she recognized herself as “Individual-1,” and this was when she decided to step down from writing about him because she had become “a part of the story at that point.”

The emails–at least filtered through the prosecutors’ lens–showed that Smythe challenged him on his apparent lack of remorse. Shkreli pointedly rebutted by dismissing the need to show remorse. From court documents obtained by Law&Crime:

In email conversations in November and December 2017, an individual corresponding with Shkreli (“Individual-1”) warned Shkreli that “Getting convicted and acting out on social media doesn’t imply you’re taking things very seriously.” Shkreli responded by explaining that because he believed the loss amount for the Guidelines would be zero, his sentence would be extremely low such that any expression of remorse was not required …

In a follow-on conversation several weeks later, Shkreli stated, “if you believe you are innocent, it is a bit of a shame to ask someone to show remorse isn’t it?” Individual-1 replied that Shkreli “[could] probably be remorseful for being a dick, overselling yourself, not being entirely forthcoming and truthful, eg, without giving up your Constitutional rights, I think.” Shkreli replied “being a dick to who? perhaps 2 out of 3 but I don’t think the giraffe apologizes for his long neck. it’s what makes me, me.”

Her newly reported account of their relationship is certainly a figurative journey, resulting her in leaving Bloomberg and divorcing her husband. She said that she realized during a jailhouse visit that in soon after resigning from the outlet that she loved Shkreli.

“And he told me he loved me, too,” she said, saying that they kissed in the prison. This continued the relationship often through correspondence, going as far as to think about having kids together. She said that it was her identified as the “fiancée” in court documents regarding Shkreli’s attempts to leave prison.

Smythe, who describes this relationship as “life partners,” now says she had not seen him in more than a year because of COVID-19 restrictions on prison visits. She said he stopped communicating with her at all when he learned about the writing of the Elle article; that is because he did not want her to discuss her story, she said.

“Mr. Shkreli wishes Ms. Smythe the best of luck in her future endeavors,” the so-called pharma bro said in a statement to the outlet. Smythe suggested that he meant that they might split, “That I’m going to maybe get my book and that our paths will” fork.

I realize it’s hard for many people to accept that 1. Martin is not a psychopath, and 2. a woman can choose to do something with her life (which does not affect you) that you in no way approve of. But that’s OK.