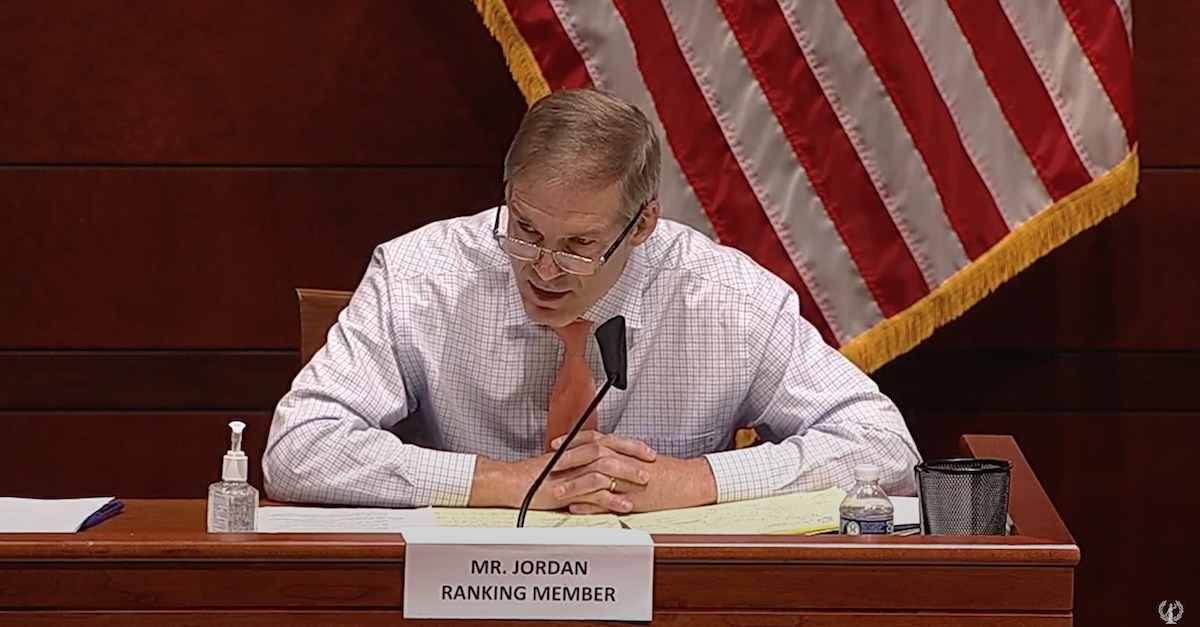 Rep. Jim Jordan (R-Ohio), ranking member of the House Judiciary Committee, made a full-throated defense of Attorney General Bill Barr against allegations that Barr has improperly politicized the Department of Justice for the benefit of President Donald Trump and Trump allies, such as Roger Stone and Michael Flynn. Jordan said that Barr isn’t doing the president’s bidding, but is “doing the Lord’s work.”

“I mean, the very day—you almost have to laugh at this, the very day you have a hearing going after the Barr Justice department and alleging that there’s politics involved there—the very day we get the order from United States Court of Appeals,” Jordan said.

Attorney General Barr is getting to the truth. Democrats are scared to see what he finds. pic.twitter.com/1s8HWFbUvT

“Attorney General Holder said he was Obama’s ‘wingman.’ The Obama-Biden Justice Department attacked investigative journalists,” Jordan continued, before shifting his attention to the “Russian hoax,” the FBI’s FISA court abuses, and the Barr-approved John Durham investigation about the origins of the Russia probe.

The Eric Holder “wingman” reference goes all the way back to 2013, which was after House Republicans held Holder in contempt for refusing to release “Fast and Furious” records.

“I’m still enjoying what I’m doing, there’s still work to be done. I’m still the President’s wingman, so I’m there with my boy. So we’ll see,” then-Attorney General Holder said during a radio interview that has not been forgotten.

Jordan said that the truth Democratic members of the committee and the media refuse to admit is that, rather than improperly politicizing the DOJ, Barr is systematically exposing the politicization of the Obama administration. Jordan characterized that as “doing the Lord’s work.”

“The politics was in the previous administration. Bill Barr is doing the Lord’s work trying to clean it up so that it doesn’t happen again,” the Republican representative from Ohio said.