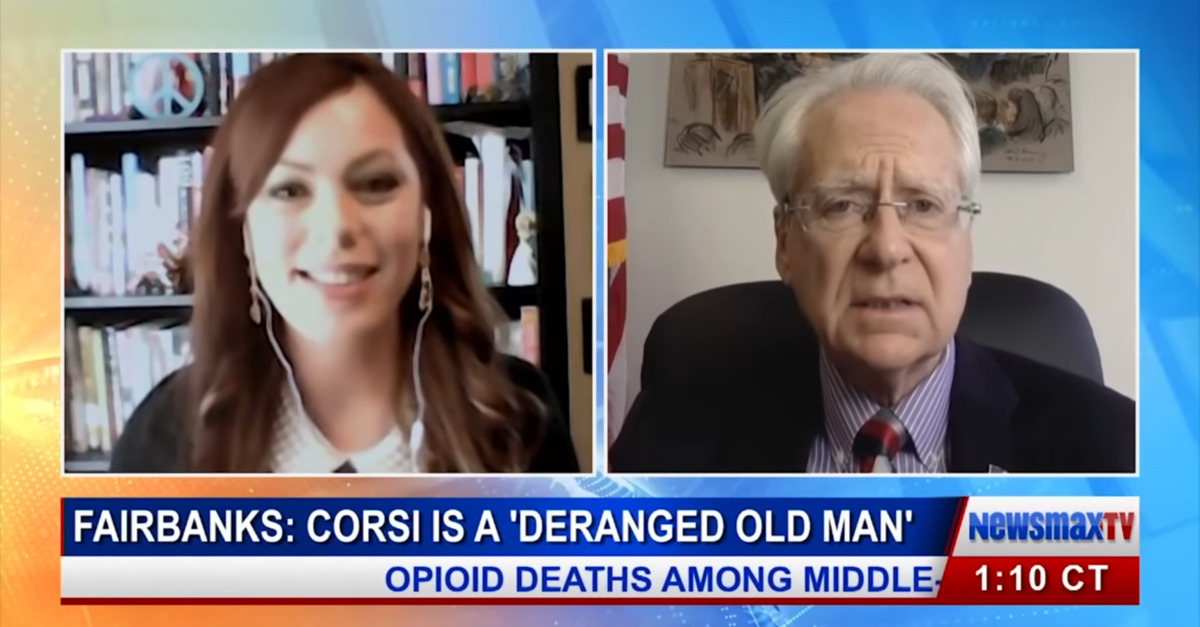 As noted by Jared Holt at Right Wing Watch, Fairbanks on Tuesday described Corsi as “a deranged old man who doesn’t understand the first thing about WikiLeaks” via Twitter. Her criticism of Corsi continued on Wednesday during an appearance on Newsmax TV.

Fairbanks went on to defend Julian Assange against Corsi’s allegation that WikiLeaks released a batch of Democratic National Committee (DNC) emails on a timeline requested by Roger Stone. Fairbanks rubbished the idea that Assange would have worked through a back-channel to coordinate that DNC email dump by noting that the publication’s founder “doesn’t take orders from anyone.”

She also claimed that Corsi had “blatantly lied” on numerous occasions and specifically accused him of falsely reporting on WikiLeaks multiple times in the past year. Klayman, in response, said he was unfamiliar with Fairbanks and had never read any of her work before issuing a legal threat.

“She’s just defamed Dr. Corsi,” Klayman told host John Cardillo. “We can sort this out in court if she really wants to get to the bottom of it.”

Fairbanks broke into laughter before Klayman could finish his sentence–prompting Klayman to warn her against laughing at him.

Fairbanks would probably argue that point.

She noted that neither her nor her employer had received any formal notice of defamation charges–even after Corsi himself echoed his attorney’s threat and tweeted that such legal notice had already been provided to Jim Hoft, the publisher of Gateway Pundit.

“We didn’t receive legal notice,” she told Right Wing Watch. “He and his lawyer called my boss rattling on me, threatening lawsuits and saying they were going to Mueller about me.”

Law&Crime followed up with Fairbanks to check on the status of the Corsi/Klayman defamation issue.

“No actual notice has been sent,” Fairbanks again confirmed, “but he has been repeatedly contacting my boss in a transparent attempt to get me fired. Everything I said in the argument was factual, and easy to prove with a basic internet search.”

His lawyer was clearly unprepared for someone questioning his client’s Wikileaks timeline and resorted to legal threats in an attempt to change the subject. Unfortunately for him, the truth is on my side and I know it — so I wasn’t about to be easily intimidated.

During the Newsmax showdown, Fairbanks also said that Corsi had “plagiarized” her own work in order to smear the government transparency outlet. In an additional email to Law&Crime, she provided an article detailing her original theory arguing for a preemptive pardon from the Trump administration. Also contained were links to Corsi’s work that reiterated said theory without linking back to the original analysis of First Amendment law.

“I complained to someone at InfoWars about it at the time because I don’t even think he had linked to my original reporting,” Fairbanks said via email. “It took me forever to read through the legal filings and I was really annoyed at the way he spun my work.”

“The interview was obviously a set up arranged with the aid of and by Stone and he promoted it today when he again attacked Dr. Corsi,” Klayman alleged via email.

Editor’s note: this article has been amended post-publication to include a response from Klayman.