Is Trump Looking For An Excuse To Fire Mueller Before He’s Impeached? 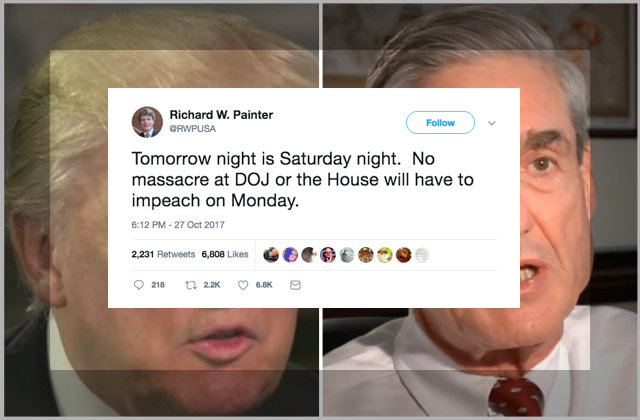 A former White House attorney claims President Donald Trump is looking for an excuse to fire special counsel Robert Mueller in order to avoid being impeached next week.

In a tweet sent yesterday afternoon at 2:06 pm, Richard W. Painter wrote, “This entire thing about the dossier and the Clinton campaign is about trying to find an excuse to fire Mueller.”

This entire thing about the dossier and the Clinton campaign is about trying to find an excuse to fire Mueller. https://t.co/nrlwTMdR6e

In that tweet, Painter links to an editorial in the Los Angeles Times from Friday which seeks to downplay the recently-recycled news story about the Democratic National Committee’s (“DNC”) funding of now-controversial opposition research on then-candidate Trump–which was eventually collected into the now-infamous Steele dossier.

As defense analyst Carl Conetta noted in a post on Facebook earlier this week, the information about the dossier’s Democrat-linked funding has been public knowledge for quite some time.

The only apparent addition to the dossier’s origin story is that Clinton campaign and DNC attorney Marc E. Elias is no longer telling reporters they’re wrong and incorrect for reporting on the Democratic Party’s financial involvement in the dossier’s compilation.

Painter then moved on to the recent scandal over the FBI’s alleged cover-up of potential influence peddling involving the Clinton Foundation and a Russian firm approved for a massive uranium deal by the Obama administration. That Russian firm was apparently  involved in series of bribes related to the issuance of a no-bid trucking contract and the Mueller-led FBI is believed to have kept mum about such evidence–even as Obama administration officials approved the firm for the uranium deal.

Describing that story, Painter tweeted, “Days before charges are filed by Mueller FOX News hypes a wild story about Hillary and the dossier on Trump in Russia. Distraction big time.”

Days before charges are filed by Mueller FOX News hypes a wild story about Hillary and the dossier on Trump in Russia. Distraction big time.

The first charges in the Russia probe were apparently filed by Mueller yesterday, according to media reports. Paul Manafort, a long-believed subject of the probe’s scrutiny, however, has not been told that any such charges relate to him, according to his attorney.

For his part, Painter appears to believe the indictments reach higher than Manafort. In another tweet he suggested that if Trump doesn’t fire Department of Justice personnel (i.e. Mueller) over the weekend, the House of Representatives will be forced to impeach the 45th president.

Painter is currently vice-chairman of Citizens for Responsibility and Ethics in Washington (“CREW”) and a professor of law at the University of Minnesota. He previously served as chief White House ethics lawyer for President George W. Bush from 2005-2007.