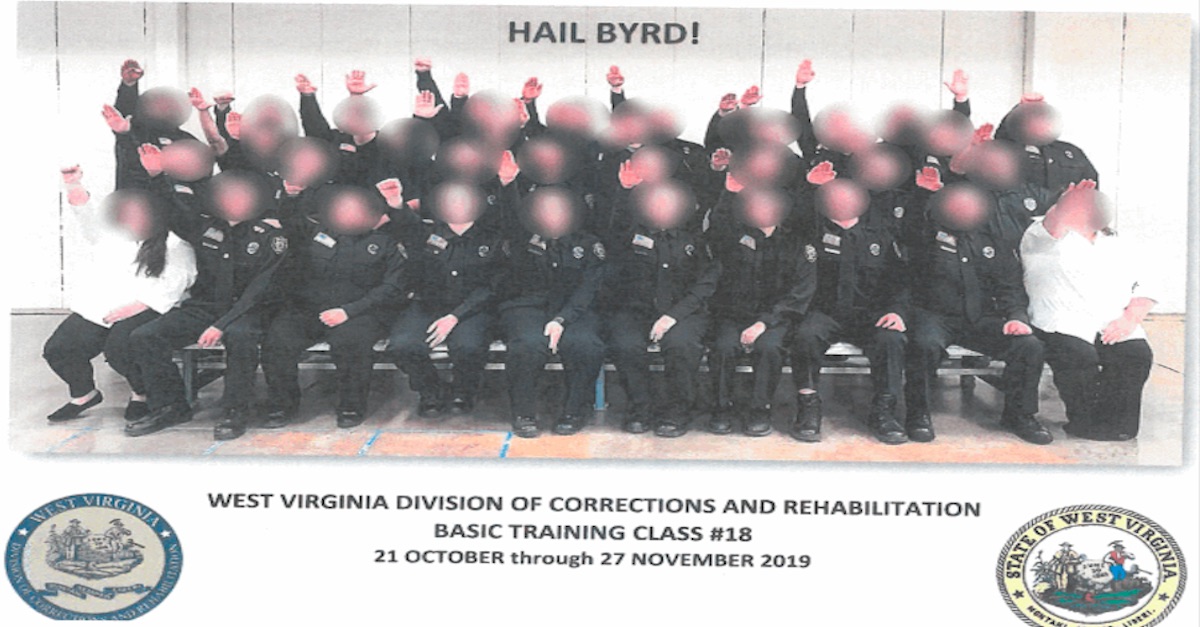 Several employees of West Virginia’s Division of Corrections and Rehabilitation Services were suspended Thursday after a photograph surfaced depicting a class of trainees giving a Nazi salute.

According to West Virginia Public Broadcasting, the caption was interpreted as a possible reference to the deceased West Virginia Democratic Senator Robert Byrd, who was a Klu Klux Klan member before renouncing the hate group and supporting the civil rights movement. An attorney for Gov. Jim Justice said the caption referred to the training class’s instructor.

Jeff Sandy, the Department of Military Affairs and Public Safety Director (DMAPS), sent a letter to employees of the department on Wednesday denouncing the photo as “distasteful, hurtful, disturbing, highly insensitive, and completely inappropriate.” The letter also said that all of the employees have been suspended and are currently under investigation.

Gov. Justice released a statement on Thursday condemning the photo.

“I condemn the photo of Basic Training Class #18 in the strongest possible terms,” Justice said. “I have directed Secretary Jeff Sandy of the Dept. of Military Affairs and Public Safety to continue actively investigating this incident and I have ordered the termination of all those that are found to be involved in this conduct.”

Jewish West Virginia state Delegate Mike Pushkin, a Democrat, said the trainees depicted in the photograph shouldn’t hold positions of authority over others.

“At best, this is an extreme lack of judgement for people who have a lot of power over other people’s lives,” he said. “At worst, it’s just blatant anti-Semitism, and it’s disgusting.”

Republican Delegate Kayla Kessinger also condemned the photo and offered a message of support to the Jewish community.

“This photo is not West Virginia; these are not our values,” she said. “And to both the local Jewish community, and the world audience that will unfortunately now see this, let me be clear: We condemn this ignorant, hateful display in the strongest terms possible.”