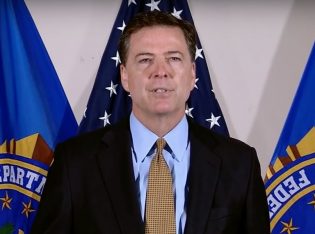 In light of reports on Thursday afternoon that the Office of the Inspector General for the U.S. Department of Justice said they would be opening an investigation of the DOJ and the FBI regarding their actions in the run up to the November 2016 Presidential Election, it seems everyone has an opinion on what should happen.

A majority of the opinions focus on the fate of FBI Director James Comey as it relates to his decision to hold a press conference on July 5 announcing the Bureau would not recommend the DOJ charge Clinton and with his choice to release letters referencing the Clinton investigation days before the election.

There seems to be a case of selective amnesia and outrage among mostly left-leaning political types as it relates to other parts of the new OIG investigation,. For some example, they seems to be forgetting OIG also said they will be investigating:

These two examples don’t seem to draw much news coverage, but perhaps it is because they involve lesser known individuals.  Yet, once you look at the allegations, you see they are potentially far more serious than anything Comey did this election season.

The first allegation refers to the fact that the FBI Director in-charge of the Clinton investigation happened to be married to a woman handpicked to run for office as a Democrat by Virginia Governor Terry McAuliffe — a longtime Clinton loyalist and ally.  Yet, that FBI Deputy Director never recused himself from overseeing the investigation.

The second allegation refers to DOJ Assistant AG for Legislative Affairs Peter Kadzik, who hacked Wikileak’s emails show tipped off the Clinton campaign about actions the Justice Department was taking in relation to the Clinton email probe back in 2015.  What’s more, Kadzik’s relationship with people close to Clinton, including her campaign manager John Podesta go back to the 1990s.  In essence, Zadzik’s case shows a DOJ political appointee with extremely close connections to at least members of Clinton’s campaign, also did not recuse himself from involvement in the matter to remove the appearance of impropriety.

While those are two of the five specific allegations the OIG will investigate, its doubtful most Americans are aware of anything except the involvement of the FBI Director in the investigation. So, thanks to good old selective amnesia among major legal and political pundits, you would be hard pressed to blame the average Joe for thinking the OIG invesitgation was all about Director Comey.

For example, Chris Cillizza at The Washington Post has a column out Thursday that declares “with the wisdom of hindsight, it’s virtually impossible to defend his decision to make such a show of a discovery that, ultimately, amounted to nothing.”

At least Cillizza is willing to admit he has the “wisdom” of hindsight.  However, he shows little wisdom throughout the remainder of the column.  Director Comey, for example, did not have the benefit of hindsight and it is not impossible to defend his actions.  If fact, it is not only not impossible, it is completely reasonable to say he did the only thing he could do based on what he was presented with at the time.  Furthermore, it is fair to go a step further and say he did he the right thing, even with the benefit of hindsight.

As we all remember, Dir. Comey drafted a letter 10-days before the election basically saying the Bureau was re-opening the Clinton email investigation after agents found emails that “appear to be pertinent” to the Clinton matter on what was later reported to be Anthony Weiner’s computer.  On the Sunday before the election, he issued another letter that said the FBI had “not changed our conclusions that we expressed in July with respect to Secretary Clinton.”  A decision on the fate of Clinton’s other aides involved in the controversy was not addressed in the letter.

In his article, Cillizza argues that the “assumption at the time” was that whatever was found on the Weiner computer was “deeply troubling and/or might lead to a decision to reverse the July judgment not to indict Clinton.” He then adds, “Turns out that assumption was wrong. Dead wrong. There really wasn’t anything new on the computer. But by the time that became clear, Clinton had been sidetracked for the final days of the campaign.”

That is interesting way to look at events, considering the entire narrative about the original Comey letter was driven strictly by the media’s own speculation.

Apparently, having not learned any lessons just a few months ago, Cillizza then speculates more about Comey’s motives in releasing the letters.

“My working assumption is that he was deeply cowed by Republican threats about transparency when it came to the FBI investigation of the Clinton server . . .  and “wanted to ensure that if anything truly earth-shattering emerged, he had covered his bases.”

He then essentially concludes that he “sort-of” gets Comey’s decision making process, before ultimately saying he is “hard-pressed to understand why Comey did what he did in the dying days of the campaign.”

As was mentioned, it is not that hard to figure out.  Comey had no choice.  He was truly in a damned if you do, damned if you don’t position.  The only safe, and fair choice for the FBI Director to make was to level with the American people — which he did in both letters.  He cannot control how a 24/7 story hungry media covers his own words.

Finally, it needs to be said that all of this spotlight is on Director Comey for two reasons, none of which he asked for.

First, Comey did not tell Clinton to set up a private server while serving as Secretary of State and then hide it from the American public for two years after she left the State Department and decided to run for president.  Hacked emails show she did not even level wth her closest aides.

Second, and most important, is the Attorney General Loretta Lynch factor. Had the Attorney General never met with former President Bill Clinton on the tarmac in Phoenix for over 30 minutes in July, Comey never would had control of this investigation.  He never would’ve held his press conference and the need for such extraordinary transparency would not have been as strong.

The interesting part of the OIG report is not going to be its findings with respect to Comey.  The actions of an FBI Deputy Director overseeing the case and a DOJ political appointee remaining involved in the case, are far more likely to result in action from the OIG.  Unfortunately, however, the most interesting part of this whole affair is a line of inquiry the OIG seeming chose not to pursue: what on earth was Loretta Lynch thinking that day in Phoenix.  That is a question to which we will likely never know the true answer.