‘He’s Dead. He’s Down’: N.J. Authorities Release Video of Police Fatally Shooting Man Who Was Allegedly Armed with a Glock on July 4 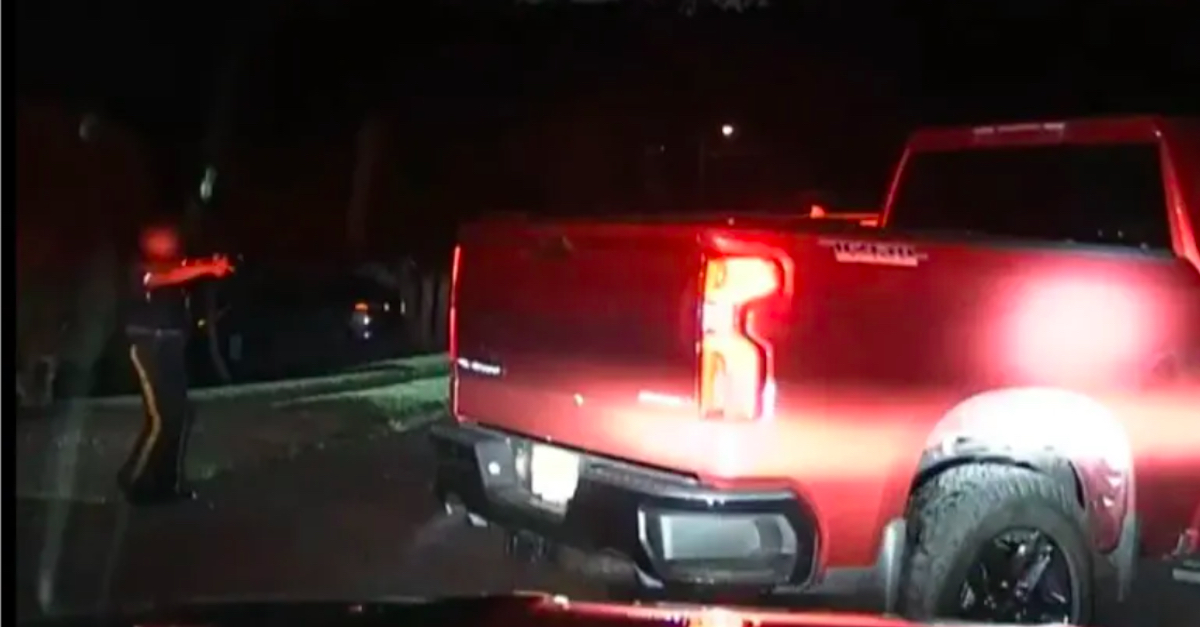 Authorities in New Jersey on Monday released body camera footage showing police officers fatally shooting a man who appeared to pull a gun and charge at them in front of his home on July 4. The identities of the officers and the deceased were also released.

According to acting New Jersey Attorney General Andrew J. Bruck, Officers Steven Kneidl and Garret Armstrong of the Newton Police Department shot and killed 61-year-old Gulia Dale III outside of his residence on Clive Place after responding to a family member’s 911 call. Bruck’s office released five videos from dashboard and body-worn cameras as well as audio from the 911 call after a public records request was submitted by the New Jersey Herald. Dale was reportedly an Army veteran.

The videos show Kneidl, Armstrong, and another unidentified officer arriving at Dale’s home at 9:30 p.m. after a female family member called 911 saying they were concerned about his behavior and telling the dispatcher that he had a firearm on him.

“The cops are on their way because you’re acting crazy,” the female family member can be heard saying during the 911 call, presumably speaking to Dale. “Would you stop! Please,” she says, presumably trying to prevent him from leaving the house.

Authorities said that Dale was attempting to leave the house in his car, a four-door red pickup truck, when the officers first made contact and told him to get out of the vehicle.

In the videos, several officers can be heard commanding Dale to exit the truck. Dale then gets out of the driver’s side door and opened the door to the backseat—it was unclear whether he put anything down or picked anything up—before getting back in the driver’s seat without shutting the door.

Dale appeared to grab something out of the glove compartment as the officers continue to command that he get out of the truck.

“Dale got out once again with an object in his hand. Officer Steven Kneidl and Officer Garrett Armstrong discharged their duty firearms, striking the vehicle and fatally wounding Mr. Dale. Investigators recovered a .45-caliber Glock 21 firearm near Mr. Dale,” Bruck’s office said in a press release.

“He’s dead. He’s down,” one of the officers can be heard saying immediately after the officers fired on Dale.

The officers immediately roll Dale over and attempt to render medical assistance but he was later pronounced dead at the scene.

Bruck’s office said the incident is still being investigated and noted that authorities had met with Dale’s family prior to releasing the footage to the public.

“The fatal shooting remains under investigation by the Office of Public Integrity and Accountability (OPIA),” the press release stated. “The recordings are being released in response to an OPRA request and pursuant to policies established by the Attorney General in 2019 that are designed to promote the fair, impartial, and transparent investigation of fatal police encounters. On Friday, July 30, 2021, investigators met with the decedent’s family and attorney to review the video recordings.”

Under state law, once an investigation into a fatal police shooting is completed, the Attorney General’s Office is required to present the case to a grand jury which will ultimately make the final decision regarding whether criminal charges are appropriate.

Watch the videos here on YouTube or at this link.