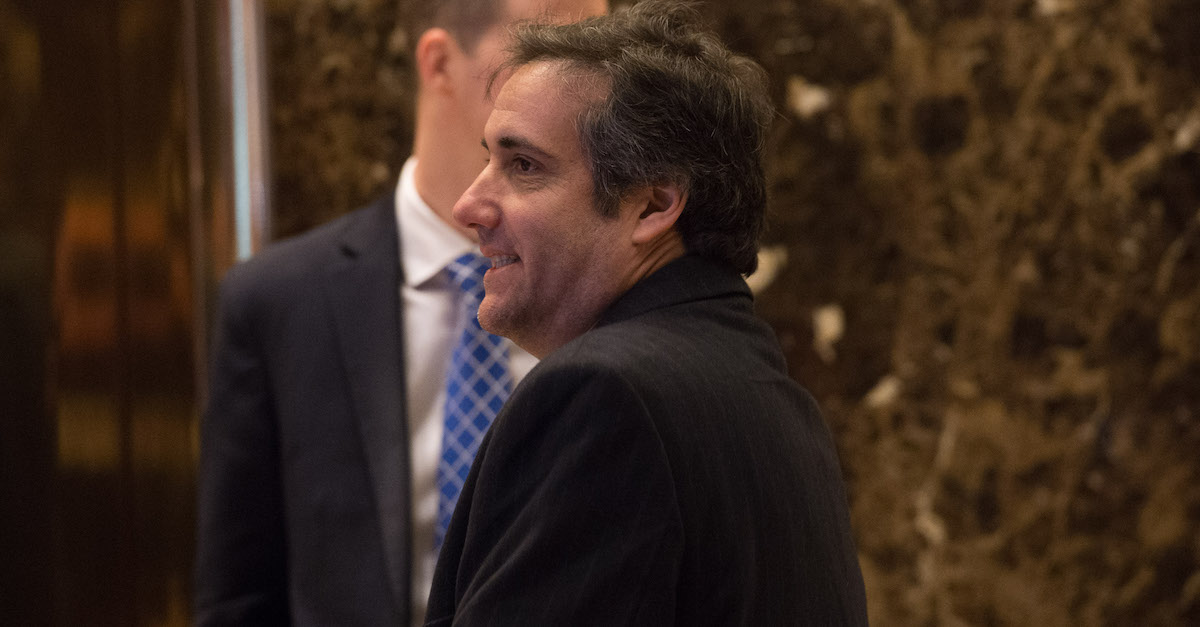 Michael Cohen, former personal attorney to President Donald Trump, kicked back and relaxed on Wednesday after a federal judge pushed off the start of Cohen’s prison stint by two months, a significant amount of time that could be used for Cohen’s actual cooperation with prosecutors.

Former federal prosecutor Elie Honig suggested, regardless of what Team Cohen is saying about congressional testimony and shoulder surgery recovery, this could very well represent the precursor to sentence-reduction.

On one hand, this happens fairly routinely – defendants seek to delay surrender date. No biggie.

*Or* this could be Cohen continuing to cooperate and trying to buy more time to seek a post-sentencing reduction before he surrenders (Rule 35). https://t.co/FkEYUwaJT8

As Law&Crime explained in an earlier piece about the Paul Manafort situation, Special Counsel Robert Mueller has, in the immediate aftermath of the plea breach determination, moved quickly to get Manafort’s sentencing over with. One reason why would be to start the clock on post-sentencing reduction.

As Rule 35 of the Federal Rules of Criminal Procedure says, the government may recommend a reduced sentence for “substantial assistance” of a cooperator. We’ve seen those words used in the context of the Michael Flynn case, for example.

How does this work? “Upon the government’s motion made within one year of sentencing, the court may reduce a sentence if the defendant, after sentencing, provided substantial assistance in investigating or prosecuting another person.”

Michael Cohen was sentenced in December 2018 to three years in prison, so that’s when the post-sentencing reduction clock started. Since then, there’s been a lot of will he or won’t he testify before Congress conversation, plus some speculation about whether Cohen’s surgery story was legitimate. Recall the photo of Cohen out with family and friends, which prompted Senate Intelligence Committee chairman Sen. Richard Burr (R-N.C.) to say, “I can assure you that any goodwill that might have existed in the committee with Michael Cohen is now gone.”

“We believe Senator Burr should appreciate that it is possible for Mr. Cohen to be in pain and still have dinner in a restaurant with his wife and friends,” he said at the time. On Wednesday, Cohen attorneys Davis, Michael Monico and Barry Spevack told Law&Crime in statement that they are thankful Judge William Pauley moved back Cohen’s prison reporting date, reiterating that the shoulder recovery need is legitimate.

“We thank the court for granting the postponement of Mr. Cohen’s surrender date to May 6.  As we have previously stated, Mr. Cohen underwent serious shoulder surgery and this extra time allows Mr. Cohen to continue his physical therapy,” they said. “In addition, he will be able to prepare for the expected testimony next week before Congressional Committees, which he welcomes.”

What they didn’t mention is what’s probably really going on here.

Being out of prison gives Cohen, yes, more time to testify, etc. But it also gives him more time for them all to push for post-sentencing reduction due to “substantial assistance.”

Elie Honig explained, though, that this may not be easy.

“Cohen is desperate to avoid prison, as most people would be. He has made no secret of his willingness to cooperate with anyone including prosecutors and Congress (though it isn’t helping that effort to keep postponing his congressional testimony),” he said. “It could be that his plan is to rack up as much additional cooperation as possible – testimony, whatever is requested – and then seek Rule 35 sentencing relief from the judge.”

Then comes the caveat: “The catch is he needs a prosecutor to make the motion for him and it’s not clear who might do that for him.”

One prosecutor in a position to do that would be Mueller, but the key here is probably the Southern District of New York (SDNY), where Cohen admitted that Trump “directed” him to make hush payments that Cohen also admitted were campaign finance violations.

Cohen did not cooperate fully with prosecutors there, however, as SDNY took pains to note in his sentencing memo:

To be clear: Cohen does not have a cooperation agreement and is not receiving a Section 5K1.1 letter either from this Office or the SCO, and therefore is not properly described as a “cooperating witness,” as that term is commonly used in this District.

It may be an uphill battle for Cohen, but if he gives prosecutors what they want in the next couple of months reporting to prison on May 6 might not be as bad.