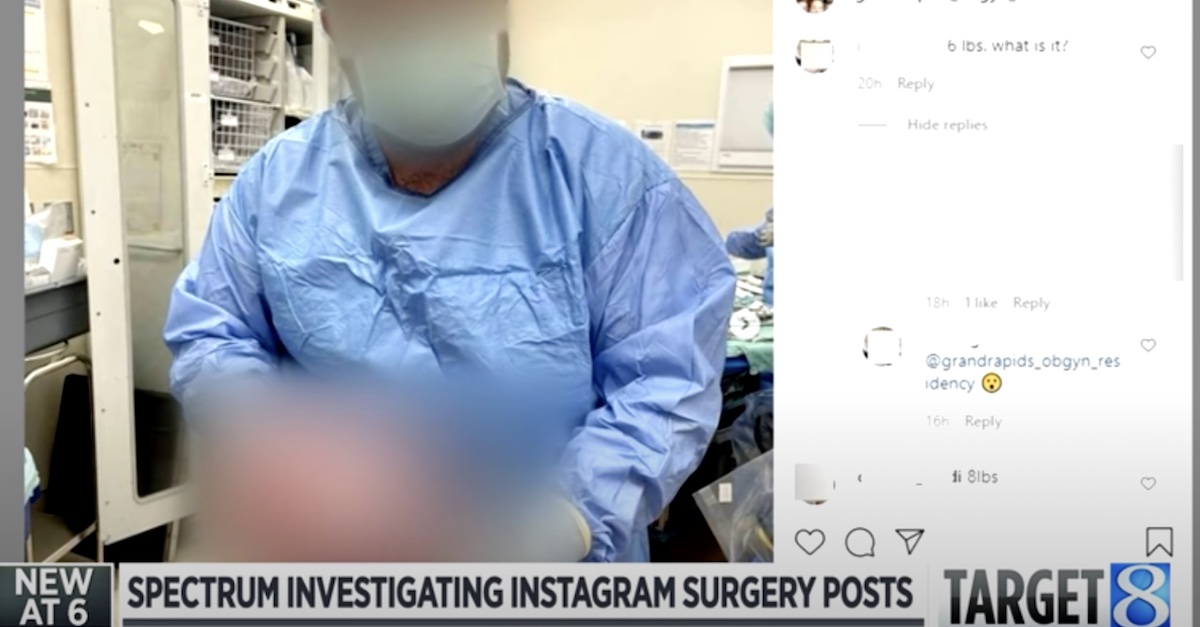 A large-scale health care network in Grand Rapids, Michigan has launched an investigation into a group of doctors who posted several pictures to Instagram showing them holding up organs and tissue that had been surgically removed from patients as part of a so-called “Price is Right” game, according to a report from NBC affiliate WOOD-TV 8.

Spectrum Health, which operates 14 hospitals in the state, on Saturday confirmed that it was investigating a group of OB/GYN medical residents who allegedly posted photos showing “a doctor posing with a length of fibrous tissue in his hand,” that appeared to include an identifiable photo of the patient from whom the tissue was removed on the operating table. Another image showed “a physician holding an organ that was removed in a cancer operation.”

Using the handle “@grandrapids_obgyn_residency,” the group responsible for the Instagram post then asked other users to guess how much the organ weighed.

“The other game we play in the [operating room] is guess that weight, It applies to much more than just babies. As always, ‘Price is Right’ rules apply so if you go over then you’re out!” the post showing the removed organ read.

The Instagram account, which was not directly affiliated with Spectrum Health, later confirmed what the organ was and what the patient was suffering from, though WOOD-TV 8 redacted that information in its report.

The post depicting the fibrous tissue was accompanied with the caption: “We get a little competitive when your… attending (physician) challenges you in morcellation. Longest one wins!”

Morcellation involves cutting fibroid tissue into small pieces to allow for laparoscopic removal through the abdomen.

According to the report, after learning about the online posts on Friday, the NBC affiliate messaged the doctors group at 1:46 p.m. with a series of questions including, “do you think the patient would appreciate you posting this?” and “Did she agree for her body to be displayed on social media as a part of your ‘game’?”

WOOD-TV 8 said it did not receive a response from the group and the account was de-activated by 2:04 p.m.

In a statement released Sunday night, Spectrum Health said the doctors’ conduct did not comport with the health care network’s standards of care.

“We were shocked and dismayed when we learned that surgical images were posted on an Instagram account not officially connected to Spectrum Health that was used by a group of medical residents. This unacceptable behavior does not in any way reflect our organization, the outstanding professionalism of our medical staff or our resident physicians-in-training,” the statement said. “These posts do not follow our code of excellence, our values or our expectations for team member behavior. We deeply value the trust that our patients have in us, and we work to strengthen this bond every day.”

Dr. Arthur Caplan, a professor of medical ethics at the New York University Grossman School of Medicine who previously sat down for an interview with the Law&Crime Network, told the New York Times that the doctors involved could face losing their licenses.

“It certainly is a serious breach of ethics. There’s absolutely no excuse for turning something that should be serious and treated with respect into a kind of silly carnival,” he said. “We try to explain that a key aspect of professionalism is always respect for the patient and understanding that patients have a strong feeling about their bodies and intimacy.”

Watch the WOOD-TV report below: