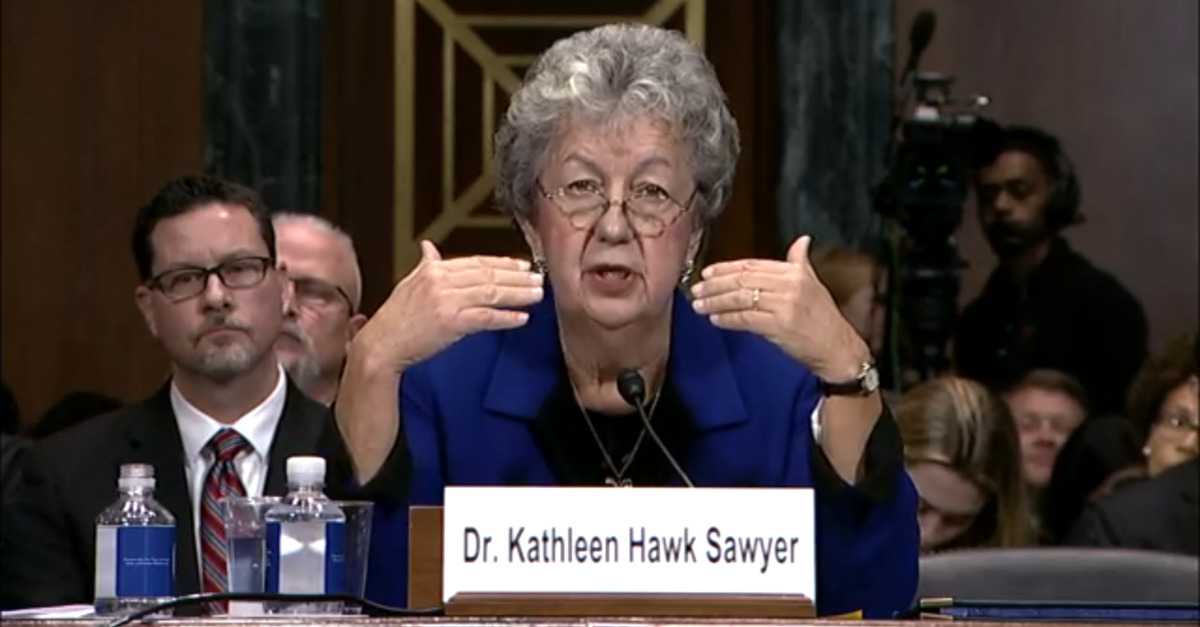 The Federal Bureau of Investigation (FBI) is looking into the possibility of a “criminal enterprise” in their ongoing probe of Jeffrey Epstein‘s death, according to U.S. Federal Bureau of Prisons (BOP) Director Dr. Kathleen Hawk Sawyer. The contours of the FBI’s investigation were confirmed during a Tuesday morning briefing before the Senate Judiciary Committee.

“As I indicated in my opening statement, I wanted to talk about the death of Mr. Epstein,” Graham said–before asking. “Do you concur with the opinion that it was a suicide?”

“That was the finding of the coroner, sir,” Sawyer replied.

“Okay, do you have any evidence to suggest otherwise?” Graham continued.

“How could this have happened?” Graham pressed.

“Unfortunately, sir, this thing, this–the death and the whole situation–is still under the investigation of the FBI and the Inspector General’s office and I’m really not at liberty to discuss specifics of this case,” Sawyer answered. “I can discuss issues around institution operations but I can’t specifically talk about that particular issue.”

“With a case this high-profile, there’s got to be either major malfunction of the system or a criminal enterprise at foot to allow this to happen,” Graham noted. “So, are you looking at both? Is the FBI looking at both?”

To which Sawyer replied:

The FBI is involved and they are looking at a criminal enterprise, yes.

The conversation them moved toward an Epstein-related discussion by way of Sawyer’s generalized explanation about the BOP’s “suicide watch” and “psychological observation” regimes.

“I can’t talk specifically about Epstein,” Sawyer said, “but we have different tiers of response if we identify an inmate who appears to be having suicidal thinking.”

“It’s a very stark, very difficult setting where everything is stripped from the room except a mattress. They get a coarse gown, like, to wear, that can’t be twisted in any way that they could hang themselves from it. They get one mattress and one blanket and they are watched constantly. There is nothing else in that room.”

“Yes, he was,” Sawyer confirmed, “However, the average time on suicide watch is only about 24 hours because it is a such a stark and actually depressing situation. We can move them to another tier which is called psychological observation.”

“Did that happen in this case?” Graham asked.

Sawyer then replied that she couldn’t answer the question.

Earlier on Tuesday, the two federal prison guards who fell asleep on the job at the Metropolitan Correctional Center in Manhattan–and later allegedly falsified records on the night Epstein died–were taken into custody and charged over those failures and the concomitant coverup.

Last Friday, the Associated Press reported that Sawyer “disclosed in a Nov. 4 internal memo that a review of operations across the agency found some staff members failed to perform required rounds and inmate counts but logged that they had done so anyway.”

“Falsification of information in government systems and documents is also a violation of policy, and may be subject to criminal prosecution as well,” Sawyer’s memo said.

Sawyer’s appearance before the Senate panel was largely focused on an overview of the BOP’s implementation of the criminal justice reform package known as the First Step Act of 2018. Her prepared testimony does not contain any references to the Epstein case.