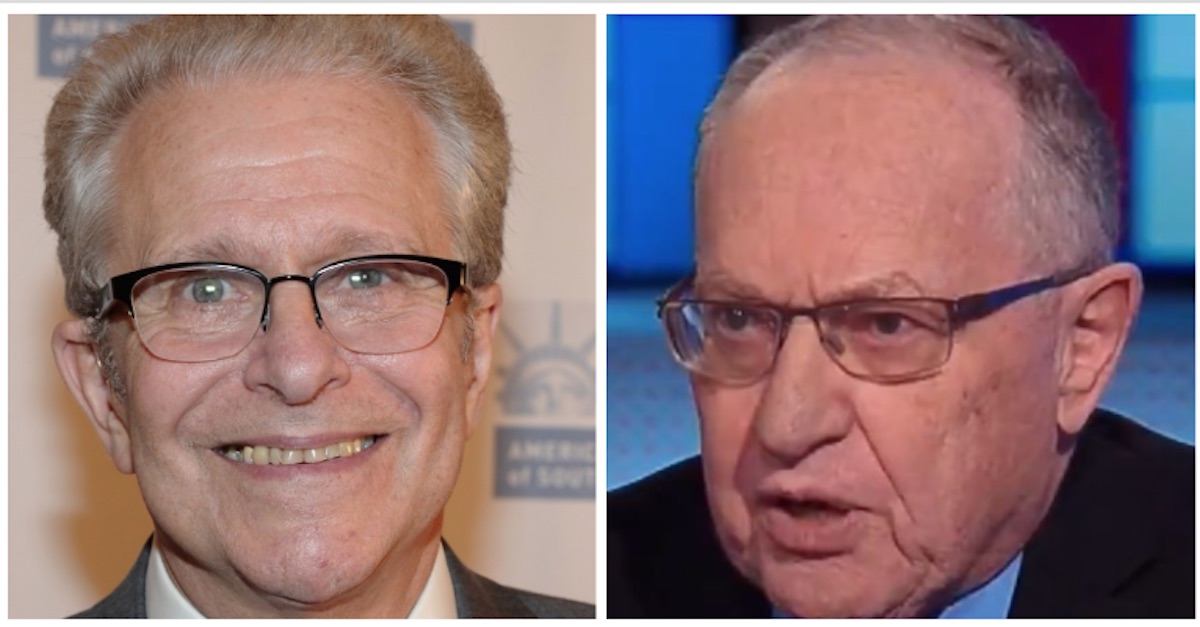 Two of the nation’s most renowned legal scholars are at odds for the second time in as many weeks. Harvard Law professor emeritus Alan Dershowitz and Carl M. Loeb University Professor and Professor of Constitutional Law at Harvard Laurence Tribe aired their constitutional grievances Monday on Twitter.

The spat between the two academics stems from Tribe’s June 5 op-ed in the Washington Post. In the piece, Tribe wrote that House Democrats were misguided by continuing to delay bringing articles of impeachment against President Donald Trump based on the belief that the inquiry would die in the Senate. The reason the House should begin impeachment proceedings immediately, according to Tribe, is that an impeachment inquiry by House of Representatives is not constrained to simply passing articles of impeachment and waiting for the Senate to act on removal; the House may actually end their investigation with a verdict on the president’s guilt.

As an example, Tribe highlights the 1974 impeachment investigation of then-President Richard M. Nixon. Following Nixon’s impeachment proceedings, the House Judiciary Committee drafted particularized findings reflecting determinations of law and fact which expressly stated that Nixon was guilty of the crimes he was alleged to have committed.

“It seems fair to surmise, then, that an impeachment inquiry conducted with ample opportunity for the accused to defend himself before a vote by the full House would be at least substantially protected, even if not entirely bullet-proofed, against a Senate whitewash,” Tribe said. “The House, assuming an impeachment inquiry leads to a conclusion of Trump’s guilt, could choose between presenting articles of impeachment even to a Senate pre-committed to burying them and dispensing with impeachment as such while embodying its conclusions of criminality or other grave wrongdoing in a condemnatory ‘Sense of the House’ resolution far stronger than a mere censure.”

Tribe, who recently authored the book, To End a Presidency: The Power of Impeachment, further explained his rationale for following such procedures on Twitter, writing that it would “(1) reduce the odds of Trump’s re-election and prevent future Trumps even if it doesn’t lead to his removal but could also (2) make his removal more likely.”

In response to the Tribe, Dershowitz denounced his long-time Harvard colleague’s idea as unlawful and antithetical to constitutional principles.

“My friend/colleague [Laurence Tribe] would place the House above the law by proposing that it act unconstitutionally to impeach POTUS without referring it to the Senate,” he wrote on Monday.

“That’s not how the framers viewed impeachment,” Dershowitz continued, adding that Tribe, “would have gone apoplectic if the republican house had done that to Bill (or Hillary) Clinton.” Dershowitz concluded by highlighting what he perceives as partisan hypocrisy, saying Tribe’s argument fails the “shoe-on-the-other-foot” test.

Less than two hours later, Tribe reacted to Dershowitz’s analysis, accusing him of not reading his op-ed in the first place: “If [Dershowitz] had read my op-ed, he’d see I NEVER proposed ‘impeach[ing] POTUS’ without ‘referring it to the Senate for trial.’ I left open ‘DISPENSING with impeachment’ and ‘embodying [House] conclusions of criminality … in a … resolution far stronger than a mere censure.’”

This is not the first time the two have sparred with one another publicly over impeachment. Law&Crime reported last week that Tribe referred to Dershowitz’s theory that the Supreme Court could intervene on the president’s behalf in impeachment proceeding as “idiotic.” Dershowitz responded by saying, “First, I never said that the President should refuse to leave office. Nor am I giving the President any such advice.”

“I only stated it as a hypothetical – a common teaching tool in legal education. I wrote that if the President were impeached on unconstitutional grounds, it is certainly possible— as two Justices have implied —that the Supreme Court review could occur,” he added. “Over the last few years, I’ve challenged my friend and colleague Larry Tribe to a debate me on impeachment, which he has not accepted. I would like to renew that invitation.”

Dershowitz then spoke of the “shoe-on-the-other-foot” test.

“As a law professor, I am only interested in what the proper legal analysis is, given our constitutional structure of separation of powers and checks and balances. My legal analysis is divorced from my political preferences. If we lived in an alternative universe — one I would prefer living — in which President Hillary Clinton would now be facing impeachment from a Republican-led House over her private email servers, I would have the exact same views,” he said. “I suspect that many of my now critics — who claim that my views on impeachment are ‘idiosyncratic’ and ‘very restrictive’ — would likely hold the very view that they now criticize.”