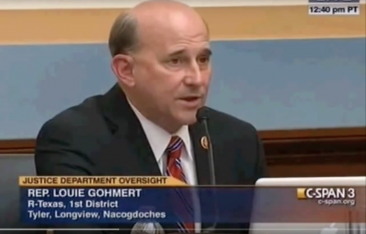 A Republican member of the House of Representatives said on Tuesday he thinks the FBI will punt on making a recommendation whether to charge Hillary Clinton, even though they have enough evidence to indict her.

“[FBI] Director [James] Comey is a pretty straight up guy, and I don’t think he’ll pull any punches,” Rep. Louie Gohmert told the Washington Examiner in an interview on Tuesday. “But I could also see him avoiding a controversy by just saying, here’s all the evidence, it’s not our job to indict, that’s up to the attorney general. And so we’re just laying out the evidence. That’s what I can see the FBI doing, especially in light of an election year, and then leave it to [Attorney General Loretta] Lynch and President [Barack] Obama to decide not to indict.”

Gohmert was adamant that he still believed Clinton should be indicted for her conduct, but he thought the DOJ would let her off as long as she continued to not be critical of the Obama Administration.

“I think there’s plenty of evidence on which to indict her,” Gohmert said. “With Hillary, as long as she doesn’t criticize Obama, I don’t see her being indicted, even though the evidence is quite strong and it’s very clear she should be indicted. But if she were to turn around and start criticizing Obama herself, I could see her being indicted very quickly.”

Clinton and her campaign have repeatedly denied any criminal wrongdoing with respect to the handling of classified information.