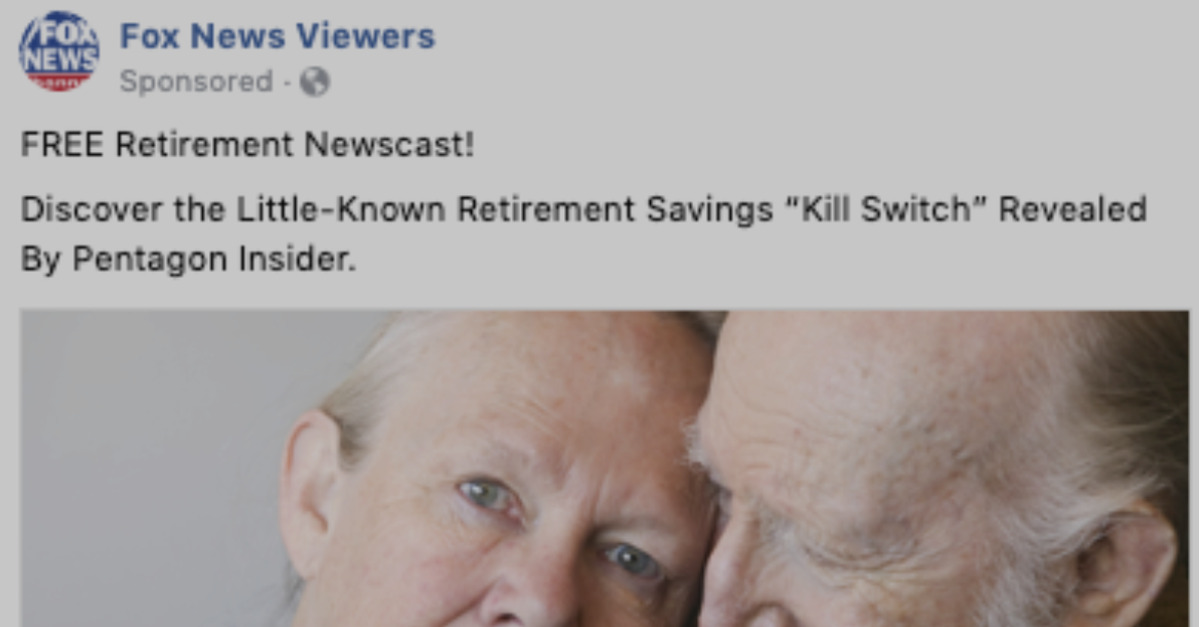 A lengthy exposé by Quartz shows how Chase Metals used “fear and Facebook,” allegedly to scam the elderly out of their retirement funds. And all of that fear was transformed into financial security paranoia–keyed toward a certain ideological faction of late-aged Americans.

“Is Your Retirement Protected from the Deep State?” asks one yellow headline in a Facebook advertisement featuring a photo of a white, grey-haired, and blue-eyed couple tenderly embracing one another and seemingly wracked with concern about their future.

The ad noted that it was “Sponsored” and “Paid for by Senior Financial Services.” For conservatives who hear frequent invocations of the “Deep State” conspiracy theory, it might all sound very official and on the up-and-up. But it was none of those things.

Quartz spoke with five retirees “who lost large portions of their savings” and noted that at least 130 additional seniors had apparently been bamboozled by the company–as evidenced by multiple state “regulatory documents” implicating the company.

“Their stories were remarkably similar: They were politically conservative, retired, and usually had little or no experience investing in precious metals,” the article reads. “They felt deceived, and a handful fought to get their money back by filing complaints with organizations such as the Better Business Bureau, the Federal Trade Commission, and review websites like Ripoff Report.”

The Texas State Securities Board issued a press release dinging Metals.com in May of this year.

“Texas Securities Commissioner Travis J. Iles entered an emergency action on May 1 against Metals.com, an unregistered firm accused of cold-calling elderly investors to convince them to liquidate their securities in registered firms and invest in precious metals,” the release notes. “According to the Emergency Cease and Desist Order, the firm convinced an 80-year-old Dallas woman to liquidate $850,000 in her retirement accounts and transfer the money to invest with the company.”

The company’s principal is one Lucas Asher, a verified Instagram personality and pop musician who fronts The Unfits. He’s named in at least one lawsuit against the company alleging fraud.

According to Jeremy B. Merrill and Hanna Kozlowska‘s report, many of the ads placed by Chase Metals on Facebook would lead users to the currently-misconfigured website: FoxInsiders.com.co.

Such a click led users to the following screaming call for investment:

YOU’RE ALL SET! HERE’S A ONE TIME SPECIAL OFFER
BUT FIRST A BONUS ONE-TIME OFFER FOR SEAN HANNITY VIEWERS

The ad noted that the offer was only valid for the next 15 minutes “FOR QUALIFIED ACCOUNTS” and contained a countdown-clock as well what appears to be a stock photo of gold bullion.

“SEAN HANNITY VIEWERS CALL NOW!” the button at the bottom of the investment advertisement implored. The phone number associated with that advertisement is no longer in operation.

Occasionally the confusion was a bit more explicit. Per Quartz:

Other ads seemed designed to mislead viewers about who was behind them. Some ads claimed an affiliation with Fox News, like those with the advertiser’s name listed as “Fox News Viewers.” The Fox News Viewers ad linked to FoxBusiness.com.co. A former business associate of Asher’s said that Asher had told him about purchasing the website.
…
Sometimes the Facebook page that ran the ad had a name that sounded like is was part of the government, such as the “US Retirement Bureau” or “Republican House Committee.”

One of the ads featured an image of the White House and advised would-be victims: “Protect Your Retirement From Potential Account Freezes.”

Law&Crime reached out to Chase Metals, which does business as Metals.com, over the phone in order to ascertain what exactly they meant by “Potential Account Freezes,” but one employee said the company didn’t have anyone on staff who could answer media inquiries. A second employee said there was no one available to address media inquiries at the time and took a message.

“Fox News has never had a relationship with Metals.com or any of its associated aliases,” a Fox News spokesperson told the outlet, “and we plan to further explore our legal options regarding this matter.”

Chase Metals has been sanctioned by state boards over their conduct after a series of complaints were filed. Again the Quartz report:

Several state securities agencies have accused Metals.com, Chase Metals, or TMTE of offering investment advice without being registered, and thus not being legally allowed to do so. Texas’s State Securities Commissioner found that Metals.com had acted as an unregistered investment adviser in Texas in violation of state law. Kentucky alleged that the company “perpetrated misrepresentations and/or omissions of material fact, which would constitute fraud or deceit upon a person.” Georgia said Metals.com engaged in an “illegal advisory scheme” in a cease-and-desist order. Alabama’s Securities Commission also alleges that several representatives of the company engaged in “dishonest and unethical behavior” by failing to disclose that the representatives were compensated for advising clients to sell their securities and buy precious metals. The Kentucky, Georgia, and Alabama actions are still pending.

Law&Crime also reached out to Fox News for comment and clarification on this story.