The wife of former US Senator Alfonse D’Amato says she has gone to the FBI to claim her husband forged her signature to create a secret bank account and issue millions of dollars’ worth of checks in her name.

Katuria D’Amato, and her lawyer, Thomas Liotti, told Law&Crime she discovered the account only after the bank, HSBC, sent her a routine compliance letter.

“I called the bank, thinking they had made a mistake,” D’Amato said in an interview for the program “Brian Ross Investigates.” She says they told her the account over a seven year period had dispersed some $39 million.

And D’Amato says when the bank sent her copies of some of the checks, she saw “two distinct forgeries” of her signature on the checks. “Two people were forging my name and my husband told me that he told them to do it,” she said. Many of the checks appear to be campaign contributions that she says she never authorized. 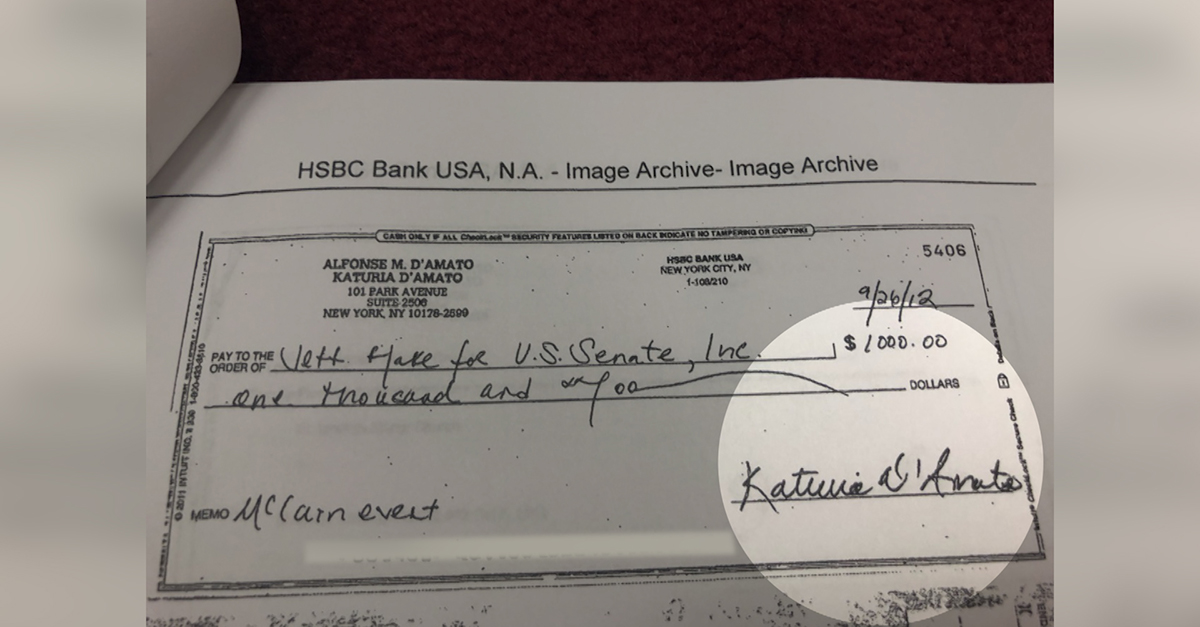 An attorney for former Senator did not immediately respond to requests for comment. A spokesperson for the FBI in New York said it is their policy to neither confirm or deny any ongoing investigation.

The allegation of the secret bank account and forged checks first appeared in a lawsuit filed by the former Senator’s wife last month. Her discussions with the FBI have not been previously reported.

The lawsuit also claims Senator D’Amato used his “power and influence” to persuade Nassau County, New York police to have her committed to a psychiatric ward for three days “against her will.” She was later released without incident.

“He lied about several things,” said Thomas Liotti, Mrs. D’Amato’s lawyer. “He started out by saying, ‘Oh, she’s crazy, you know she’s crazy. He then said she takes lithium and we all know that lithium is generally taken for a bipolar disorder which she does not have,” he said. And the lawyer claims D’Amato “also said she had a psychiatric history which she doesn’t have. These are lies, fabrications by him and this is what led to the police takin her to the hospital.”

D’Amato, a Republican who served three terms in the United States Senate, told Law&Crime any suggestion he tried to his wife committed “is repulsive, repulsive.”

He said any action he took was only to protect his children. “It’s about the well-being of my children, to make sure they are in a safe environment and that they’re protected,” he said. “That’s what I’m doing, I’m fighting for my children.”

In the lawsuit, Mrs. D’Amato claims her husbands false claims about her mental health led he to the temporary loss of custody of the couple’s two children.

She says her husband’s clout in New York has made it her difficult to get a fair hearing in pending divorce and child custody hearings and that is why she went to the FBI and local corruption investigators.

The couple has been married for 15 years.

“I feel really foolish that I didn’t see it, but he kept a lot of stuff secret.”