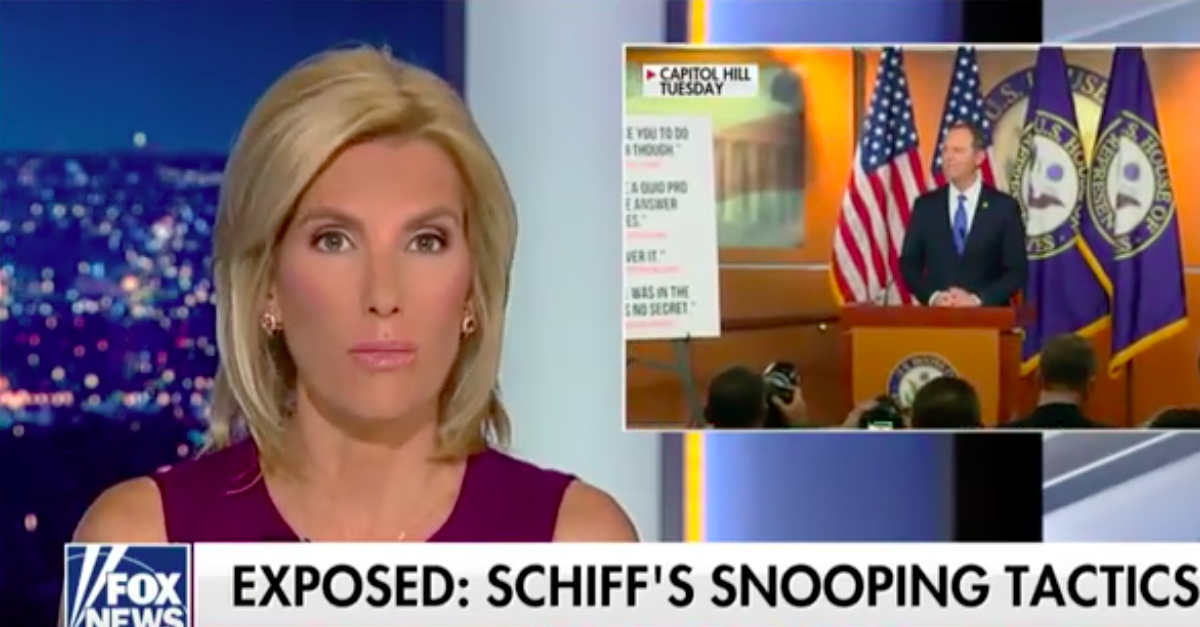 The Ingraham Angle segment centered on the House Intel Panel’s Impeachment Report, which contained phone records showing Rep. Nunes phone contacts with the Rudy Giuliani and Giuliani’s recently indicted business associate Lev Parnas. Ingraham and her guest, Sara Carter, both claimed to have heard from a “knowledgeable source” that Schiff obtained Nunes’s records with the help of the NSA.

Carter has reportedly been barred from appearing on Fox News’s “hard news” shows because her reporting “is not vetted, and passes none of the network’s editorial guidelines.”

“A knowledgeable source tells the Ingraham Angle tonight that not only did Schiff get dirt from the secret subpoenas that he sent to phone companies, he also got help from the NSA. All Americans should be shocked by this and more, and demand a full and immediate investigation,” Ingraham said.

“I’ve heard the same,” Carter said, before launching into a diatribe against the Obama administration for expanding the NSA’s spying program.

For my sins, I actually listened to the entire clip in hopes of being able to unpack what exactly they were getting wrong. It's just an unintelligence mess of people who don't understand 12333, FISA, Title III, ECPA, Gates Procedures, contact chaining… or honestly anything.

Hennessey concluded that Ingraham’s segment was one of the most uninformed conversations she had ever heard.

“It’s honestly astonishing. I don’t think I’ve ever heard a more uninformed conversation about NSA or intelligence collection in my life. And I once had a relative corner me a wedding to say NSA was blackmailing John McCain into supporting immigration reform SO THE BAR IS REAL LOW,” she wrote.

In response to questions about how the panel obtained Nunes’s records, Patrick Boland, the top spokesman for Democrats on the House Intelligence Committee, told The Daily Beast on Thursday that congressional investigators “did not subpoena call records for any member of Congress or their staff.” The report itself indicates that Nunes was picked up incidentally in the records of Giuliani and Parnas when AT&T call logs were subpoenaed.

This is pathetic. Delusional. https://t.co/k96nDjXMeF