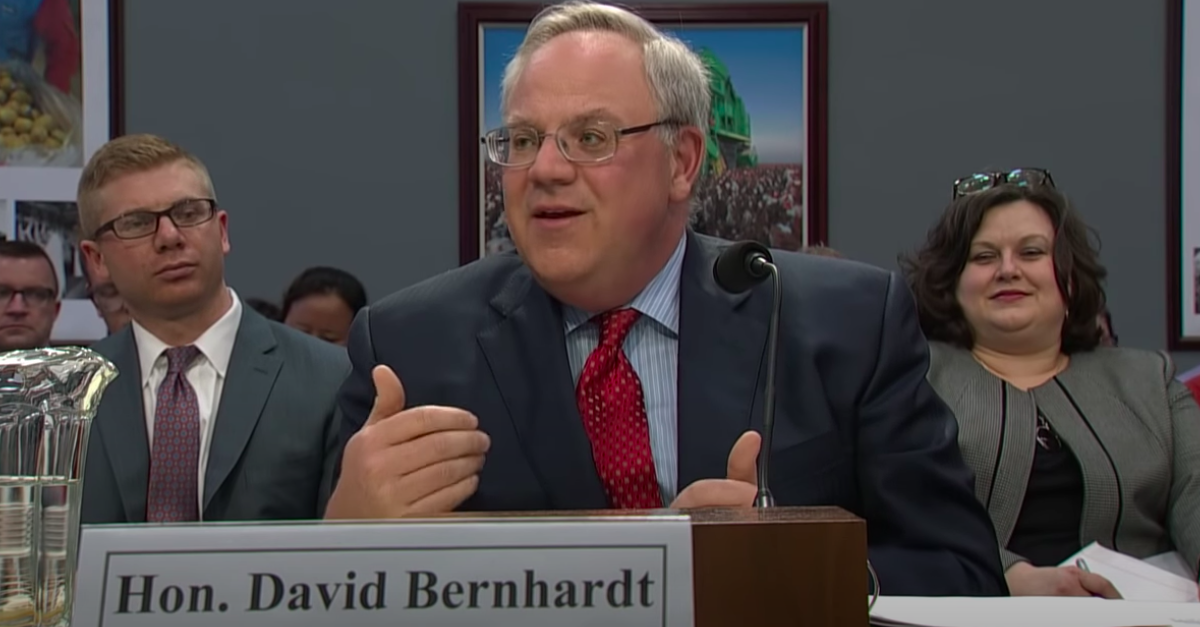 The U.S. Department of the Interior’s (DOI) Office of Inspector General (OIG) concluded in a report published Tuesday that a top official ordered the withholding of documents pertaining to David Bernhardt until after the Senate confirmed him as Interior Secretary last year. It happened despite a court order compelling the department to produce the records.

DOI had been ordered by a federal court to produce the records as part of several Freedom of Information Act (FOIA) requests initiated in 2017 by government watchdog groups investigating whether then-Deputy Secretary Bernhardt had complied with ethics requirements.

Prior to joining DOI, Bernhardt headed a lobbying office predominantly servicing fossil fuel corporations such as Halliburton, Cobalt International Energy, and the Independent Petroleum Association of America, and he vowed to recuse himself from any department business involving his former clients.

After failing to comply with the requests, the court ordered DOI to “review 1,500 pages of potentially responsive records per month and release the responsive documents.”

Ryan Zinke was ousted as DOI secretary in January 2019. Bernhardt was nominated as his replacement in February. That same month, then-DOI’s counselor to the secretary Hubbel Relat (now the DOI deputy solicitor) directed department attorneys overseeing the FOIA response to “withhold any documents that were sent to or from Bernhardt, or that referenced him in any way” from the court-ordered document production.

“In response to Relat’s direction, DOI staff removed 253 pages from the upcoming FOIA release, including, among other things, weekly updates to the White House, updates to senior DOI leaders, and draft press releases and reports,” the report stated.

Bernhardt was confirmed to the U.S. Senate in April 2019 and the DOI released most of the pages it had initially withheld in December 2019.

The DOI’s top attorney Daniel Jorjani–a former Koch Brothers advisor—told the inspector general that Relat’s order directing FOIA staff to temporarily withhold the release of Bernhardt-related documents in the FOIA litigation until after his confirmation was “quite reasonable.”

The IG however said that “the court is the proper venue” to determine whether the department violated the order by selectively withholding documents until Bernhardt was confirmed.

Democratic lawmakers, having already accused Jorjani of perjuring himself during congressional testimony regarding his role in the FOIA process in May, expressed outrage at the findings.

In a joint statement released Tuesday, Sens. Ron Wyden (D-Ore.) and Raúl Grijalva (D-Ariz.) accused DOI of engaging in a “cover up.”

“Officials at Interior are now on the record admitting what we suspected all along: they orchestrated a coverup to protect Secretary Bernhardt during his confirmation, and all but lied to Congress about it. We call on the Department of Justice to open a criminal investigation into whether or not Jorjani perjured himself before Congress when he assured the Senate Energy and Natural Resources Committee that there was no ‘heightened’ FOIA review process,” they said.

See below for the full report: