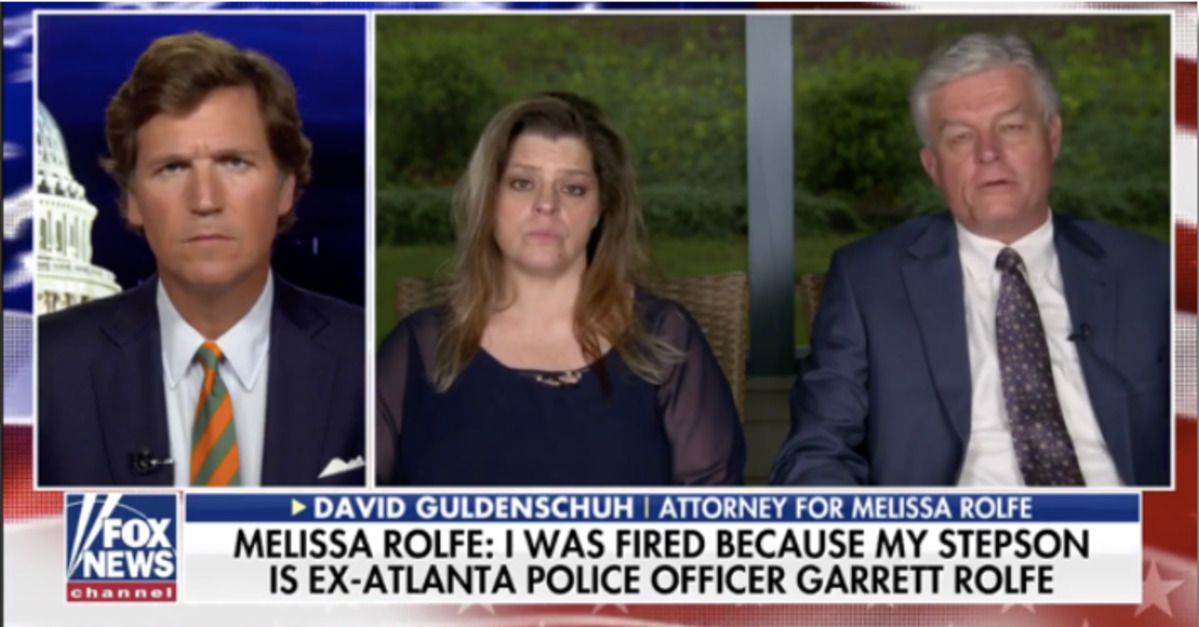 A mortgage brokerage in Georgia is suing one of their former employees for defamation over the disputed terms of her firing and an ensuing conservative “media firestorm” that erupted after the Atlanta Police Department (APD) killed Rayshard Brooks.

Timing, however, is key to the allegations in the lawsuit filed with the Fulton County Superior Court late Tuesday evening.

According to Equity Prime Mortgage, LLC, Melissa Rolfe was more or less slated for dismissal even before her stepson Garrett Rolfe became the subject of national news after he fired the two shots into Brooks’s back and killed him on the night of June 12.

The complaint alleges that Melissa Rolfe repeatedly violated company policy and created an uncomfortable and hostile working environment when she served as Equity’s human resources director from early February through late June of this year–when she was apparently fired for those repeat infractions as well as for allegedly fabricating a relevant portion of her resume and qualifications.

“Less than a month after she had been hired by [Equity], on March 19, 2020, Rolfe was reprimanded because she had made inappropriate jokes via text message about conducting rectal temperature checks in the office,” the filing alleges. “About a month later, on April 23, 2020, Rolfe was reprimanded again, this time for referring to employees as ‘savages.’ Less than two months later, two employees reported Rolfe for calling employees ‘fucking bitches,’ saying an employee had only been hired because she had ‘big boobs,’ and making racist comments.”

Those various employee complaints prompted an internal investigation by the company. According to the lawsuit, Equity’s CEO Eddy Perez alerted Rolfe specifically to the complaints about racist remarks and the comments about her co-worker’s breasts during a sit-down.

“Rolfe became enraged, saying that she doesn’t see color, but that some people are ‘idiots,'” the filing claims. “Because of how upset Rolfe had become, Perez cut the meeting short and told her that he would follow up with her after investigating more.”

The date of that initial meeting was June 11. Brooks was killed by the younger Rolfe late on the night of June 12.

Melissa Rolfe worked from home the Monday following that fatal Friday–and Equity originally offered her eight weeks of paid leave to deal with the fallout experienced by her family. But the investigation into her behavior viz. other employees continued.

The lawsuit alleges that immediately following her absence from the office, “a flood of employees came forward and reported other instances of Rolfe’s wildly unprofessional and hostile conduct.”

The filing contains the following bullet list of allegations:

“In addition, an [Equity] employee who had previously worked with Rolfe at Rehabilitation Physicians of Georgia reported that Rolfe had been a ‘Medical Assistant’ there—not an ‘HR Director’ as her resume represented,” the lawsuit continues. “That person further reported contacting Rolfe’s previous employers and discovering that she had falsified other information as well.”

Later that same day, far-right Republican congressional candidate Marjorie Taylor Greene posted on Twitter that Rolfe had been fired by Equity because her “employer caved to the mob and wrongfully fired her.” On Wednesday, President Donald Trump congratulated Greene her primary win in Georgia.

Congratulations to future Republican Star Marjorie Taylor Greene on a big Congressional primary win in Georgia against a very tough and smart opponent. Marjorie is strong on everything and never gives up – a real WINNER!

An additional tweet by Greene essentially reiterated that accusation and said Rolfe had “been treated very unfairly.”

So we’ve been telling you the story of the police officer charged, Officer Rolfe. Until today, his stepmother, her name is Melissa Rolfe, was the HR Director at a place called Equity Prime Mortgage in Atlanta, Georgia, but today she was let go. Apparently, she was fired, and her only crime was being Officer Rolfe’s stepmother. According to the source familiar with the matter who spoke to this program, Rolfe was promised that her job was safe, but today she was told, and we’re quoting, we have to terminate our relationship with you. No other explanation was offered and honestly, no other explanation was needed. It was obvious what happened.

According to the lawsuit, Melissa Rolfe, Greene, and Greene’s campaign conspired to plant this “false story” with Carlson’s producer.

And they were apparently just getting warmed up.

Melissa Rolfe and Greene went on to repeat those accusations–that she was fired simply for being Garrett Rolfe’s stepmother–during appearances on Carlson’s show and on Glenn Beck’s eponymous show as well. And, when asked to account for any other reason she might have been let go, Melissa Rolfe pleaded ignorance.

As a result of the Rolfe-Greene tag-team tactics against Equity inside the conservative media bubble, Perez received numerous death threats and the company’s website was rendered inoperable due to the amount of negative traffic they were receiving, the lawsuit claims. And, in the end, Equity claims those efforts resulted in “enormous reputational and financial harm.”

After the media campaign against them began, Equity released a statement that cast Rolfe’s firing as the product of the tsunami of office complaints against her–but that apparently didn’t stop the duo’s bombardier tactics against the lending business.

“Glenn Beck and Tucker Carlson both asked Rolfe whether she had been subject to any complaints for her conduct during her time at [Equity],” the lawsuit notes. “Rolfe responded in the negative, repeatedly insisting that she could not identify anything she had done that could have justified her termination and that she was fired for fighting for her son and being his stepmom.”

The lawsuit says the negative campaign directed toward Melissa Rolfe’s former employer has continued up to the present:

Defendants knew that their smear campaign was based on a lie, but they intentionally disregarded the truth to capitalize on national attention related to Rayshard Brooks’s death. In addition, Rolfe wanted to punish [Equity] and extract money from [Equity] for firing her and wanted to fraudulently obtain monetary donations from the public: upon information and belief, Rolfe sanctioned and has accepted or intends to accept money from a GoFundMe fundraiser predicated on the falsehood that she was terminated “for just one reason alone: she is former Atlanta officer Garrett Rolfe’s stepmom.”

Equity is suing Melissa Rolfe and Greene’s congressional campaign for defamation and for false light invasion of privacy. The company is seeking actual (reputational), presumed and punitive damages from each of the defendants and attorney’s fees.