Jeffrey Epstein, the convicted sex offender who was accused of serially trafficking dozens of young girls ahead of his death at 66, appeared in more than a few mugshots in the final years of his life. This seems to have been one of the final ones, if not the last. Records show it was taken on July 8. A second photo was taken on the same day. 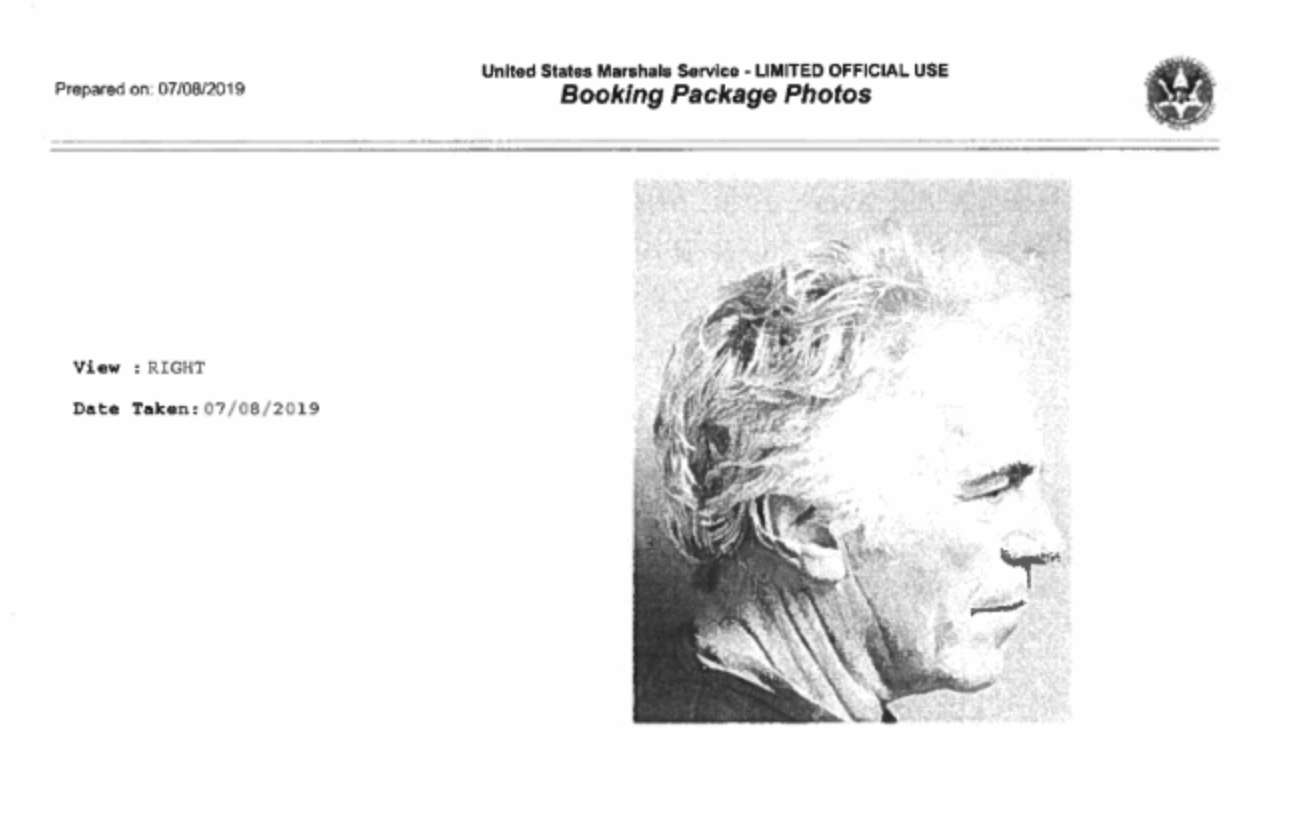 Epstein fatally hung himself in a cell at a federal jail in Manhattan jail, say authorities. Guards were supposed to check on Epstein every 30 minutes, and he was supposed to be have cellmate. Epstein had reportedly attempted suicide in the weeks before his death, but his attorneys pushed for him to be taken off suicide watch. He reportedly didn’t have a cellmate, and the guards on schedule at the understaffed facility have been accused of sleeping on the job, and falsifying records.

Epstein was indicted in July for federal sex trafficking charges. The mugshots above and details about the investigation were released as part of a Freedom of Information Act (FOIA) request to the U.S. Marshals Service, according to MuckRock, which published the documents.

Records dated Aug. 29 noted “Mental Concerns” under “Special Cautions and Medical.” There was also a note for “Suicidal Tendencies.”

A woman identified as an air traffic controller spoke to investigators in a partially redacted report dated July 10, 2019. Epstein parked his private plane at the base of the control tower when he arrived, she said. She claimed to have seen him leave with young girls, and noted two specific events: 1) He was with two white girls who looked 11 to 12; and 2) he was with an apparently mixed-race girl who appeared to be 16 to 18. These were between “June/July of 2018 through November of 2018” she said in the report. Asked how far Epstein was from the control tower, she said it was perhaps 50 yards, but they were looking at him using binoculars. She said that there wouldn’t be records showing the inbound flight plans. The ATC information and route wouldn’t show who was on the flight, she said. The air traffic controller said in the report that there might be another person willing to talk. She would check and call the investigator back, she said.

Epstein was charged in the federal indictment for crimes that allegedly occurred between 2002 and 2005.

A document dated June 13 showed that marshal received notice from the U.S. Virgin Islands Sexual Offender Register that Epstein was traveling to France the previous March. Investigators determined he might have also traveled to Vienna, Austria and Monaco even though those nations weren’t noted on the notification form. Authorities wanted to look into whether Epstein violated a federal law on sex offenders who failed to report international travel.