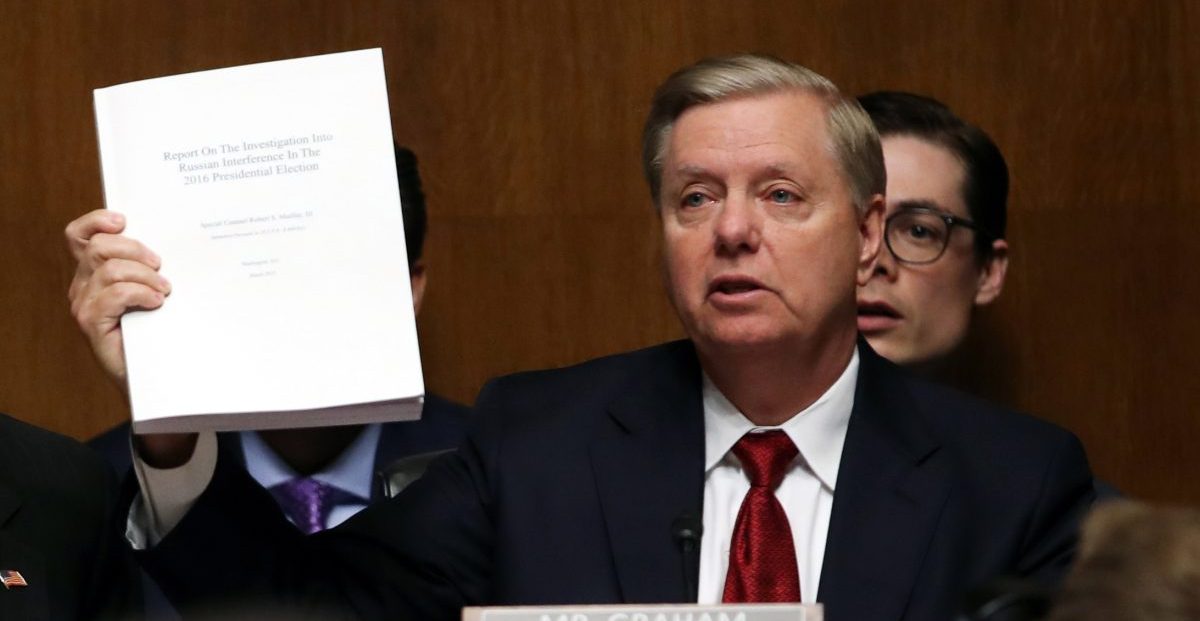 1. Graham claimed that Special Counsel Robert Mueller’s report “concluded there was no collusion…no collusion, no coordination, no conspiracy.”

This claim is factually inaccurate. As Special Counsel Robert Mueller wrote in his report, the term “collusion” is not a legal term and therefore had no bearing on the Special Counsel’s investigation, which was charged with looking into whether members of the Trump campaign and Russians cooperated in such a manner as to constitute conspiracy to coordinate with a foreign power. While Mueller’s report noted that Trump’s campaign did welcome Russian assistance in combatting Hillary Clinton, he ultimately concluded that the evidence was insufficient to constitute a crime. However, the report did not go so far as to exonerate the Trump campaign of all wrongdoing relating to conspiracy, as Mueller left open the possibility that evidence of criminal coordination may have been deleted or encrypted by members of the campaign.

2. Graham claimed that Mueller intentionally “left it to Mr. Barr” to decide whether Trump committed obstruction of justice.

Again, this claim is factually inaccurate. Mueller directly contradicts the notion that Barr should make the final decision as to whether Trump obstructed justice. Per the report, the special counsel’s office “gathered evidence … relevant to the elements of those crimes and analyzed them within an elements framework – while refraining from reaching ultimate conclusions about whether crimes were committed,” because of the Office of Legal Counsel’s guidelines against indicting a sitting president. Instead, the report methodically recites multiple instances in which Trump’s actions could be construed as obstructing justice before reaching the conclusion that it is the responsibility of the Congress to “apply the obstruction laws to the President’s corrupt exercise of the powers of office [in accordance] with our constitutional system of checks and balances and the principle that no person is above the law.”

3. Graham incorrectly stated that there were “zero instances of Trump impeding Mueller.”

As previously mentioned, not only did Mueller detail at least 10 instances in which the President may have committed obstruction of justice, the report then goes out of its way to state that, based on the most sympathetic reading of the facts, Mueller was unable to exonerate Trump regarding obstruction of justice. Graham’s views on presidential conduct have clearly evolved over the years, as evidenced by his 1998 statement to Congress that Richard Nixon should have been impeached the day he failed to comply with congressional subpoenas.

4. Graham and Barr vacillated over whether Barr’s four-page letter to Congress constituted a “summary” of Mueller’s report.

Graham did nothing to clear up the confusion as to whether or not the four-page letter Barr sent to Congress constituted a “summary” of Mueller’s findings or a simple recitation of what Barr deemed to be the report’s “principal conclusions.” Graham repeatedly referred to the document as Barr’s “summary,” asking Barr “if the conclusions in your four-page summary…accurately reflect [Mueller’s] bottom line conclusions.” Barr said “yes,” but later denied that his letter constituted a summary of the report, claiming he was only interested in relaying principal conclusions.

5. Graham must have forgotten about some of the things he said about Trump when talking about Peter Strzok’s texts.

Graham spent a sizable portion of his opening statement quoting from text messages exchanged between former FBI agent Peter Strzok and former FBI lawyer Lisa Page in 2016 to illustrate the investigators’ hostility toward then-candidate Trump and highlight their inability to conduct an unbiased investigation into the campaign. Graham went so far as to read one of the texts from October 19, 2016 verbatim, reading: “Trump is a fucking idiot.” Graham then apologized “to the kids out there.” Graham also failed to mention that, in 2016, he himself made similar statements in public, deriding Trump as a “jackass” that was “unfit for office,” even tweeting that if Republicans “nominate Trump, we will get destroyed…and we will deserve it.”