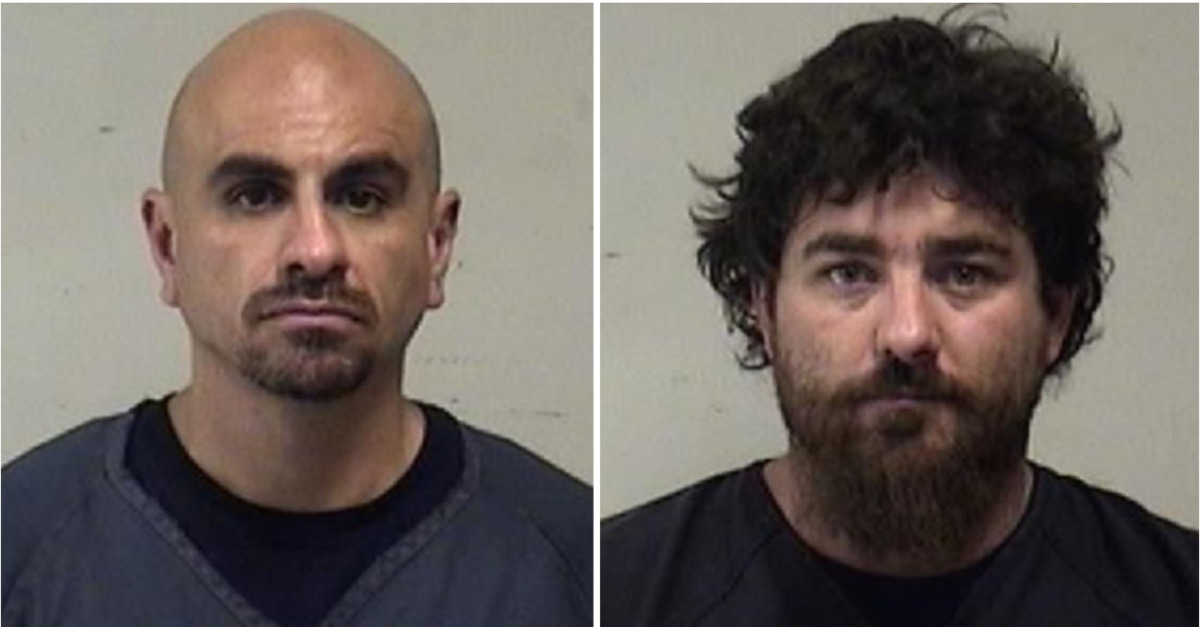 Federal prosecutors have charged two Missouri men with a slew of gun-related charges after a recent trip to Kenosha, Wisconsin.

According to the U.S. Attorney for the Eastern District of Wisconsin Matthew D. Krueger, 40-year-old Michael M. Karmo and 33-year-old Cody E. Smith were arrested and charged with multiple felonies after the Federal Bureau of Investigation (FBI) received a tip.

A criminal complaint alleges that the law enforcement-affiliated tipster told FBI agents that Karmo and Smith “were in possession of firearms and traveling from Missouri to Kenosha, Wisconsin, to loot and possibly ‘pick people off.'”

“FBI agents subsequently located and detained Karmo and Smith at a hotel in Pleasant Prairie, which is located near Kenosha,” prosecutors said in a press release. “After receiving consent to search Karmo and Smith’s vehicle and hotel room, FBI agents recovered an Armory AR-15 assault rifle, a Mossberg 500 AB 12-Gauge shotgun, two handguns, a silencer, ammunition, body armor, a drone, and other materials.”

The citizen witness (CW) relied on by the FBI allegedly said they found many things about Karmo and firearms troubling enough to report:

CW reported that Karmo frequently walked around with a firearm in his waistband and played “Rambo” in the backyard with various firearms. CW has seen KARMO with 3-4 guns in his possession within the last few months. He bought firearms through the mail and manually put the firearms together himself “shaving down the firing pin” and making the firearms untraceable to law enforcement.

“Karmo told CW he was going to go to Kenosha with the intention of possibly using the firearms on people,” the complaint goes on. “CW feared that with KARMO’s increase in conspiracy theory talks and other ‘crazy’ political talk he was not in the right mind set to have a firearm.”

Both Karmo and Smith admitted to traveling across state lines with several guns in their possession because they wanted to participate in a rally held by President Donald Trump and to verify his claims about the civil unrest that has occurred in Wisconsin since the police shooting of Jacob Blake.

The charging document elaborates on their alleged motivation:

After waiving his rights, Karmo also agreed to speak with agents. The interview was recorded. Karmo stated that Karmo and Smith have been roommates in Hartville, Missouri, for approximately four weeks. They worked together and are part of the 417 Second Amendment Militia. On August 31, 2020, Karmo and Smith decided to drive to Kenosha to “see for themselves” what was going on regarding the riots. On the way, they stopped in Iowa to visit someone Karmo knew. Karmo stated that he was offended because this individual commented that Karmo and Smithlooked like they were heading to Kenosha to shoot people.

Both men have previously been in trouble with the law. Karmo has “prior convictions for vehicle theft, burglary, violation of parole, felon in possession of firearm, evading peace officer resulting in injury/death, receive known stolen property, and possession of controlled substances in California, some of which are felonies,” according to the complaint. Felons are legally prohibited from possessing firearms.

Smith was previously charged with domestic violence in 2009–but the complaint is unclear about whether or not he was convicted. Prosecutors say this means he cannot legally possess a firearm. Krueger’s press release, however, says that Smith was, in fact, convicted for that prior charge.