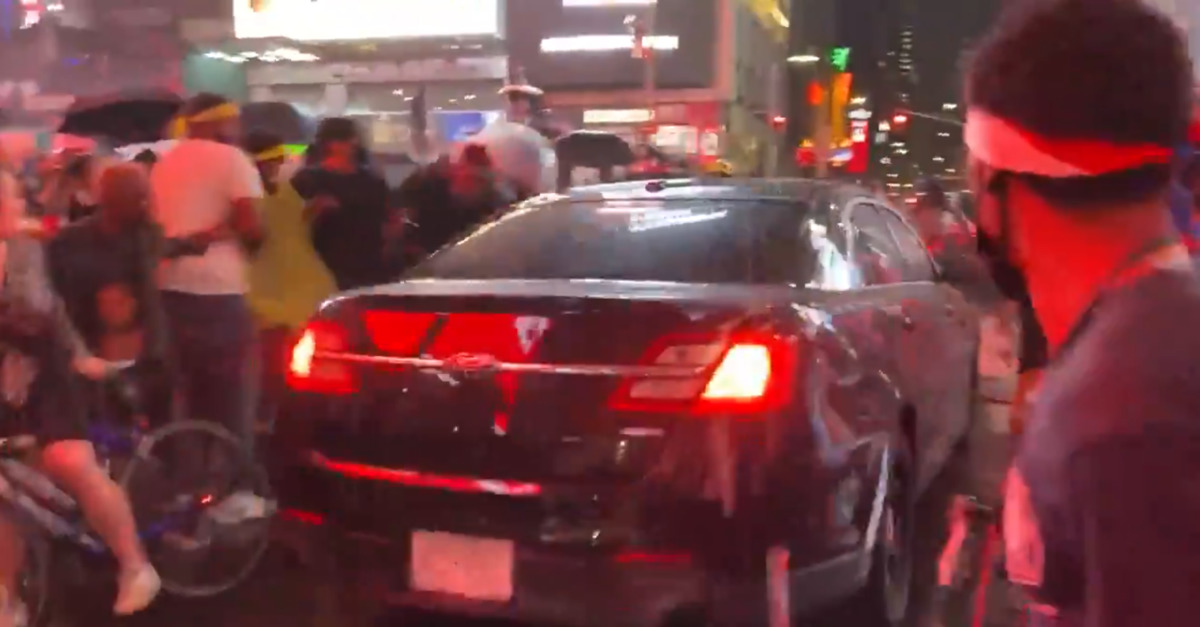 The New York City Police Department (NYPD) has interviewed the man they believe is responsible for driving his car through a crowd of Black Lives Matter protesters in Times Square on Thursday night. The man was reportedly released without charges.

According to Gothamist, the car’s license plates are registered to “pro-NYPD activist” Hakim Gibson. The Associated Press cited the Gothamist when reporting the same.

According to the NYPD, an investigation into the incident is ongoing. Detectives are currently trying to determine if the driver committed a crime.

If you wonder why protestors don’t trust NYPD it’s because of a thousand incidents like this, where they choose sides in the streets. We’re lucky no one is dead- these officers escorted the Trump supporters into a car before they plowed through protestors. pic.twitter.com/GCz6aYOl9q

This used to be a cop car, so unless it has a new owner, the very pro-Trump NYPD has some explaining to do.

While police are still investigating, demonstrators and pundits viewed the incident as an intentional and illegal attack.

Someone just plowed through a #BlackLivesMatter protest in New York City’s Times Square.

Help identify the car so we can hold the attacker accountable.pic.twitter.com/eJuSezueMH

According to the NYPD, however, there are currently “no complainants” stemming from the event.

“NYPD asks if there is anyone injured, please come forward,” the law enforcement agency said on Twitter.

Critics took issue with that approach.

“You don’t need a complaint to file charges,” noted attorney Rebecca Kavanaugh. “It’s on video tape. You file charges without complainants all the time. That’s reckless endangerment, reckless driving, attempted assault right there on tape. Hey, you could even charge attempt murder if you wanted to.”

At least one of the protesters said publicly that they witnessed the car “hit” several people.

“Hit the person in front of me, and then me, and then I believe the person behind me,” Lora Gettelfinger told new York City’s local CBS affiliate CBS2. “We all had bikes, so they just came charging through. It was pretty terrifying.”

“I’m in shock,” the 33-year-old activist added in comments to Gothamist. “I’m just happy to be alive right now.”

The vehicle was outfitted with a police-style push bumper on the front, initially causing a wave of confusion as to whether or not the NYPD itself was behind the alleged attack.

The NYPD itself addressed that aspect of the controversy:

There is an ongoing investigation into an incident in Times Square involving a black Taurus sedan. This auto is NOT an NYPD vehicle. pic.twitter.com/kBGuXhFtP1

Protesters were out on Thursday evening protesting the Rochester Police Department’s killing of Daniel Prude. A small contingent of counter-protesters had also gathered and were given an NYPD escort before some of them got into the car in question.

“Just as it hits that intersection, you have the group of protesters — 200 roughly — as fate would have it, start to move in that direction and start to go down 46th Street,” NYPD Commissioner Dermot Shea told CBS. “You have a bicyclist block the car from moving. We have two people that strike the car window, one with a punch, one banging on it, and you have the car speed away right through the crowd.”