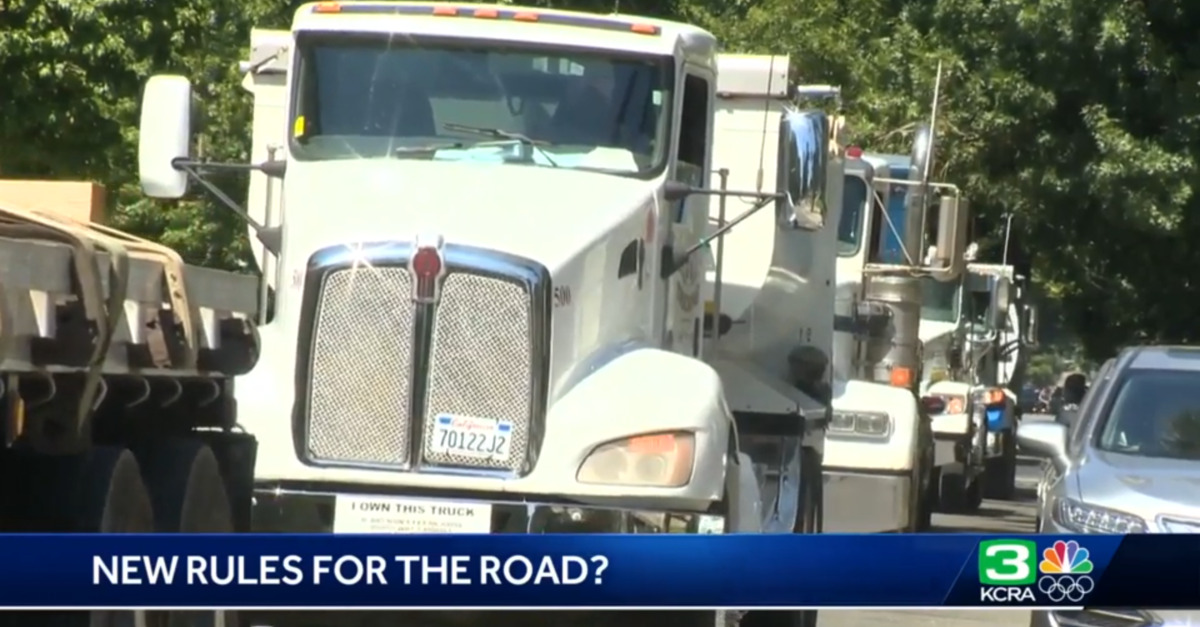 Call it the power of independent trucking.

A federal judge in California has temporarily pumped the brakes on a new labor law set to impact the lives and livelihoods of at least 70,000 freelance truckers in the Golden State.

The incoming legal requirements are not specifically aimed at truckers, however, and for now the law will still take effect against freelance workers in several other industries.

Freelance writers and freelance photographers, for instance, are currently bidding for a restraining order of their own. The controversial law, AB-5, went into effect on New Year’s Day. On New Year’s Eve, U.S. District Judge Roger T. Benitez put the legislation on hiatus as it applies to truckers with a temporary injunction.

The legislation aims to reclassify hundreds of thousands of freelancers as employees and was sold by Democrats in California as a shot across the bow of so-called “ride sharing” services such as Uber and Lyft–who infamously do not consider their drivers employees.

Freelancers are legally known under the tax code as independent contractors because they’re technically treated as business owners despite the practical limitations of such a classification in most circumstances, e.g. aforementioned workers in the gig economy.

The law codifies the ABC test–a legal doctrine imported from Massachusetts–which somewhat stringently determines whether or not a worker qualifies as an employee or independent contractor.

Per the law itself:

That standard originally made its way out west via the Dynamex case decided in April 2018 by the California Supreme Court. In that case, a delivery company was found to have misclassified their drivers as independent contractors in order to skirt rules and regulations.

The effort to rein in such abuses of otherwise waged employees has resulted in many independent contractors protesting that the law will simply put them out of work. Leading those efforts in the court system is the industry group California Trucking Association (CTA).

The American Society of Journalists and Authors and the National Press Photographers Association similarly filed suit in December. U.S. District Judge Philip Gutierrez is mulling an injunction in that case.

According to the CTA’s latest amended complaint filed in the U.S. District Court for the Southern District of California in November:

Many of CTA’s members regularly contract with individual independent contractors who own and operate their own trucks (“owner-operators”) to provide interstate trucking services to customers in California and other states in accordance with federal and state regulations governing the transportation of property. Prior to Dynamex, it was lawful for CTA’s members who contracted with owner-operators to treat them as independent contractors and not employees for purposes of California’s labor laws. Now, however, under the ABC test…each motor-carrier member of CTA that continues to use individual owner-operators to provide trucking services for their customers must treat such workers as employees and will be required by law to provide them with all protections that California law affords to employees. Given the realities of trucking, it would be impracticable if not impossible for CTA’s motor-carrier members to provide interstate trucking services by contracting with independent owner-operators and to simultaneously comply with California’s onerous requirements for employees.

“The direct and real consequence of Dynamex and AB-5, therefore, is that CTA’s motor-carrier members, if they wish to avoid significant civil and criminal penalties, must cease contracting with owner-operators to perform trucking services for customers in California and to shift to using employee drivers only when operating within the State,” the lawsuit continues.

Proponents of the bill have cast the opposition as a campaign of propaganda and fear-mongering by the major trucking interests.

San Diego Assemblywoman Lorena Gonzalez, a Democrat and author of the bill, has previously noted that anyone who received a 1099 IRS form will benefit from the increased worker protections. Of the lawsuit, Gonzalez insisted she and others intend to fight back against the CTA in order “to return jobs in the trucking industry to good, middle class careers.”

“For decades, trucking companies have profited from misclassifying drivers as independent contractors,” she continued, “taking away rights such as meal and rest periods and fair pay.”