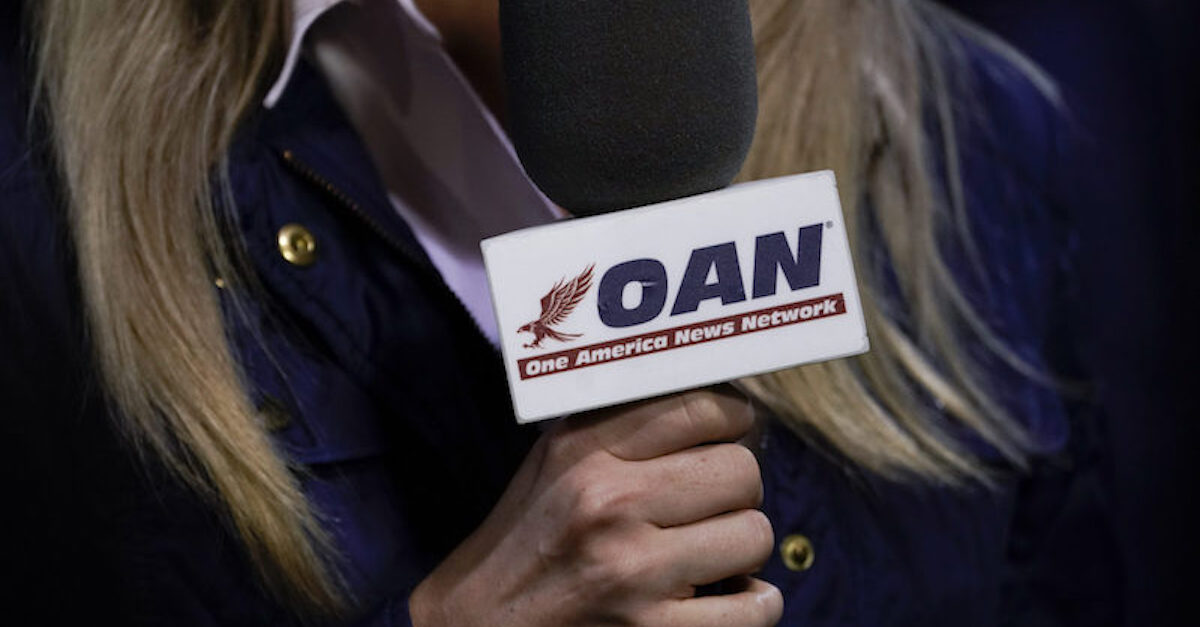 A reporter with One America News Network works at a campaign rally with President Donald Trump at Newport News/Williamsburg International Airport on September 25, 2020 in Newport News, Virginia.

A federal judge in Washington, D.C. will allow a defamation lawsuit brought by a voting machine company against a right-wing network to proceed, rejecting the network’s claims that a defamation case in Colorado involving some of the same parties would address the same issues raised in the D.C. action.

U.S. District Judge Carl Nichols rejected a motion Monday in the lawsuit brought by Dominion Voting Systems against One America News, the conservative media organization owned and run by Robert Herring and his son Charles Herring.

As Law&Crime previously reported, Dominion sued the pro-Donald Trump OAN in August of 2021, alleging the far-right network and website defamed the voting systems company by falsely claiming that its machines were rigged in favor of Joe Biden in the 2020 presidential election. Dominion has filed lawsuits against Fox News and Newsmax over similar comments aired on those networks.

The Herrings, along with OAN correspondent Chanel Rion and now-former anchor — and Trump attorney — Christina Bobb, where personally named as defendants.

OAN had moved to dismiss the case entirely or, alternatively, have a stay issued pending resolution of a Colorado state case involving a one-time Dominion employee. In the alternative, the defendants argued, the case should be moved to Colorado, where Dominion is headquartered, and argued that the U.S. District Court for the District of Columbia didn’t have jurisdiction over them.

In its motion, Dominion relied heavily on a legal concept known as the Colorado River doctrine, so named for a a 1976 Supreme Court case that held that a federal court may “stay or dismiss a federal action in favor of a concurrent action in state court under ‘exceptional circumstances.'”

OAN argued that a Colorado state case against Donald Trump by Eric Coomer, a former Dominion executive, is a “parallel” case that addresses the same issues that Dominion raises in its own lawsuit. In Coomer’s case, the now-former Dominion employee sued Trump, Rudy Giuliani, “Kraken” attorney Sidney Powell, OAN, Newsmax, the Gateway Pundit and other right-wing commentators over repeated assertions that that Coomer bragged on a conference call — dubbed by the conspiracists as the “Antifa conference call” — that voting machines were rigged in Biden’s favor.

OAN argued that because the Coomer case involves the same parties and the same alleged defamatory statements, Dominion’s D.C.-based lawsuit shouldn’t proceed at all, or at least until the Colorado case was resolved.

“Coomer no longer works for Dominion, and Dominion is not a party to the Colorado suit,” Nichols wrote.

Nichols, a Trump appointee, agreed with Dominion that the cases are not parallel.

“[T]here is minimal overlap between the parties in the cases,” Nichols wrote. “The sole plaintiff in the Colorado case — Eric Coomer, a former Dominion employee who has no current affiliation with the company — is not a party here, and of the 14 defendants named in the Colorado action, only two — OAN and Rion — are also named in this federal action.”

Nichols was similarly unconvinced by OAN’s argument that Coomer “effectively is Dominion and every statement OAN has made about Dominion is also a statement about Dr. Coomer (and vice versa).” OAN’s evidence to support this argument was a statement from Coomer himself in which he asserted that he was “the face of the Dominion conspiracy theory.”

“Coomer may have said that, but his saying it does not make it so,” Nichols wrote. “After all, Coomer is no longer an employee of Dominion. Nor did he file his suit on Dominion’s behalf. To the contrary, Coomer’s complaint alleges that OAN (and others) ‘invaded his privacy, threatened his security, and fundamentally defamed his reputation across this country.’ And he requests relief ordering OAN (and others) ‘to remove any and all defamatory publications made about Dr. Coomer,’ not publications made about Dominion.”

Noting that Coomer’s case “centers on the allegation that Coomer bragged on a conference call about subverting the 2020 election,” Nichols concluded that the resolution of that case “will not address all the other statements at issue here.”

“Defendants did not even try to show that Dominion could have properly filed this suit in Colorado,” Nichols wrote, noting that OAN’s brief “offers zero analysis on whether a Colorado court could exercise personal jurisdiction over them.”

“[M]uch of the relevant evidence will be based in the District, because that is where the allegedly defamatory statements were filmed and produced. To be sure, evidence related to the integrity of Dominion’s voting machines will likely be based in Colorado, because that is where Dominion is headquartered. But ‘technological advances have significantly reduced the weight of the ease-of-access-to-proof factor,'” the judge wrote.

Nichols noted that OAN’s contacts with the District of Columbia were extensive, and that it is also the origin point of the statements.

“Allegedly defamatory broadcasts that caused Dominion’s injury … were filmed and produced at OAN’s D.C. bureau,” Nichols wrote. “Indeed, none of Defendants’ allegedly defamatory conduct occurred in Colorado. What is more, although Dominion is headquartered in Colorado, no Defendant is based there — again, Rion and Bobb are D.C. residents, and OAN and the Herrings conduct substantial business in the District.”

OAN had argued that the defamatory segments were broadcast from California, where the network is headquartered. Nichols was unmoved.

“But Dominion also alleges that OAN filmed, produced, reviewed, and edited the defamatory programming at its D.C. bureau,” Nichols wrote (citations omitted). “Put another way, if Dominion’s allegations are true — and OAN offers no basis for concluding otherwise — then OAN’s D.C. bureau was the editorial epicenter for the programming at issue.”

Nichols also rejected the Herrings’ argument that they were not subject to personal jurisdiction in the District of Columbia, noting that the complaint alleges that the Herrings “exercised complete control” over Dominion-related content produced at their network’s D.C. bureau.

“Specifically, Dominion alleges that ‘[t]he false Dominion stories were examples of what were referred to internally at OAN as ‘H stories’ — that is, stories that the Herrings personally approved and required OAN to run, with the Herrings exercising control over their content, and without the California editorial team (or anyone else) fact checking the stories or vetting sources,'” Nichols wrote in the opinion, adding that Charles Herring allegedly reviewed and approved final drafts for broadcasting “of at least some of the false Dominion stories,” and he “regularly travels to OAN’s Washington, D.C. bureau as part of his oversight and control of its operations.” Nichols also noted that Robert Herring is described as OAN’s “de facto news director” who exercises “a ton of influence over every aspect of the newscast.”

In other words, Nichols found, Dominion’s allegation that the Herrings “transacted business in the District by personally overseeing and directing publication of the Dominion-related content at OAN’s D.C. bureau” is enough to support the court’s assertion of personal jurisdiction.

The ruling marks the latest failure by a conservative media network and other pro-Trump defendants to scuttle defamation lawsuits brought by Dominion, Smartmatic, and others who say that they were damaged by false claims of election interference.

“We are pleased to see this process moving forward to hold OAN accountable,” a spokesperson for Dominion told Law&Crime in an emailed statement. OAN did not immediately respond to Law&Crime’s request for comment.

You can read Nichols’ decision here.