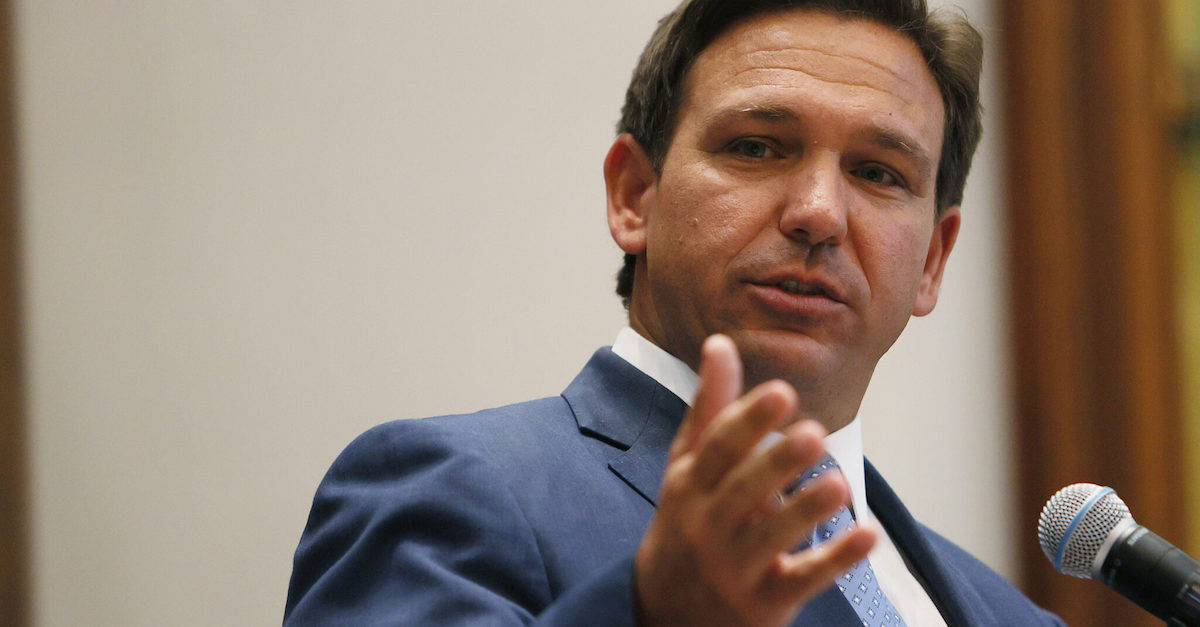 Florida Gov. Ron DeSantis speaks during a press conference at the Shul of Bal Harbour on June 14, 2021 in Surfside, Florida.

On May 6, 2021, a coalition of civil rights groups—led by the local chapter League of Women Voters and the Democratic Party’s lawyer Marc Elias—led the charge against the sweeping legislation, known as SB 90. The law ratchets up voter ID requirements, prohibits mass mailing and collection of ballots, and decreases drop box availability.

After holding a trial earlier this year on the challenge, U.S. District Judge Mark E. Walker largely agreed with the view that the law “runs roughshod over the right to vote, unnecessarily making voting harder for all eligible Floridians, unduly burdening disabled voters, and intentionally targeting minority voters—all to improve the electoral prospects of the party in power.”

In a 288-page opinion from March 31, 2022, Walker wrote that thousands of pages of evidence and testimony from 42 witnesses helped bolster that conclusion.

“Having reviewed all the evidence, this Court finds that, for the most part, Plaintiffs are right,” wrote Walker, a Barack Obama appointee who blocked multiple provisions of SB 90.

Three Donald Trump-appointed judges from the highly conservative U.S. Court of Appeals for the 11th Circuit revived the three blocked provisions of the law and suspended the “preclearance” regime forcing Florida to seek the court’s review on voting laws over the next decade.

Their 15-page ruling finds that the district court violated the so-called Purcell principle, stemming from a Supreme Court decision discouraging changes to voting procedures close to an election.

“So, an important question: When is an election sufficiently ‘close at hand’ that the Purcell principle applies?” the panel asked. “As the district court noted, the Supreme Court has never specified precisely what it means to be ‘on the eve of an election’ for Purcell purposes.”

The panel declined to float a hard-and-fast rule.

“Whatever Purcell’s outer bounds, we think that this case fits within them,” the ruling states. “When the district court here issued its injunction, voting in the next statewide election was set to begin in less than four months (and local elections were ongoing). Moreover, the district court’s injunction implicates voter registration—which is currently underway—and purports to require the state to take action now, such as re-training poll workers.”

The judges stayed the district court’s order enjoining the operation of SB 90’s drop-box, registration-delivery, and solicitation Provisions, as well as the order subjecting Florida to preclearance.

“The district court’s determination regarding the legislature’s intentional discrimination suffers from at least two flaws, either of which justifies a stay,” they wrote. “And, although we think it presents a closer question, we hold that the district court’s determination that the Solicitation Provision is unconstitutionally vague and overbroad is sufficiently vulnerable to warrant a stay.”

The Trump appointees took issue with Walker’s statement that “Florida has a grotesque history of racial discrimination.”

As characterized by the 11th Circuit, Walker also seemed to “chide” the Supreme Court for suggesting that “Our country has changed” since the Voting Rights Act was enacted in 1965. For the panel, that language suggested that the district judge’s review wasn’t “focus[ed]” and “limited.”

The panel did not weigh in on the registration-disclaimer provision, which a subsequent Florida statute repealed.

For Elias, who spearheaded the challengers’ effort, that development provided the silver lining of the decision.

“While this is disappointing, this was a procedural loss based on the timing before the midterm,” Elias tweeted. “And, one of the provisions we successfully challenged was repealed by the legislature as a result.”

DeSantis’s representative did not respond to Law&Crime’s email requesting comment.