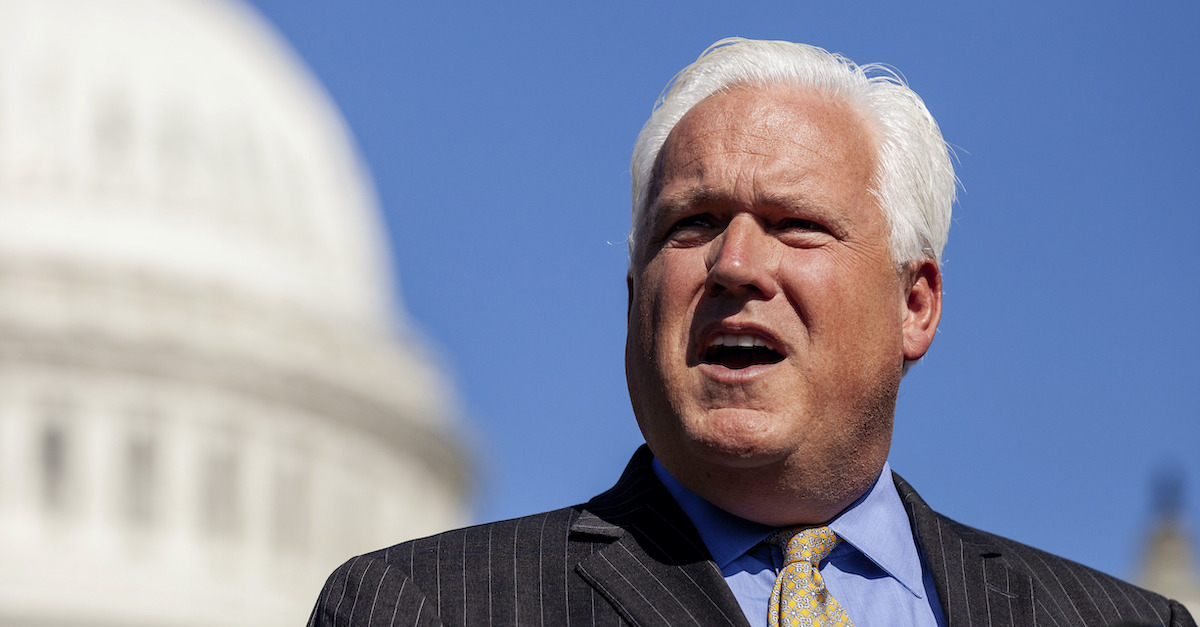 Matt Schlapp, chairman of CPAC, speaks at a press conference on the Protecting Children’s Innocence Act. (Sipa via AP Images)

Matt Schlapp, the head of an influential conservative advocacy group, has been accused in a lawsuit of “aggressively fondling” the genital area of a political aide in October — and defaming him after the press reported on the alleged incident.

The accuser, who worked for the Herschel Walker campaign at the time, sued the Conservative Political Action Conference (CPAC) chief and his wife Mercedes Schlapp anonymously in Virginia Circuit Court in Alexandria.

The ex-aide claims that the Schlapps and others acted in concert to discredit him.

According to the lawsuit, the plaintiff — identified only as “John Doe” in the complaint — was assigned to drive Schlapp to a Walker event on Oct. 19, 2022.

Schlapp allegedly invited the plaintiff to dinner, first at the Capitale Grille and then at a second bar called Manuel’s Tavern, when Schlapp sought a livelier place.

“At Manuel’s Tavern, Mr. Schlapp sat unusually close to Mr. Doe, such that his leg repeatedly contacted and was in almost constant contact with Mr. Doe’s leg,” the lawsuit states. “Mr. Schlapp was so close to Mr. Doe that he bumped into Mr. Doe’s torso where Mr. Doe had a Sig Sauer handgun holstered, asked about it, and professed an unfamiliarity with this weapon and firearms generally. Mr. Schlapp also encouraged Mr. Doe to have more drinks, despite the fact that Mr. Doe was driving. Mr. Schlapp’s behavior made Mr. Doe uncomfortable, and Mr. Doe sought to create distance between he and Mr. Schlapp.”

The accuser claimed Schlapp groped him on the ride home.

“On the drive from Manuel’s Tavern to the Hotel, Mr. Schlapp placed his hand on Mr. Doe’s leg,” the lawsuit says. “Mr. Doe was frozen with shock, mortification, and fear from what was happening, particularly given Mr. Schlapp’s power and status in conservative political circles.”

According to the lawsuit, Schlapp then moved his hand and “began aggressively fondling Mr. Doe’s genital area in a sustained fashion.”

On Jan. 5, 2023, the Daily Beast broke the story of the allegations in an article titled “Herschel Walker Staffer: Matt Schlapp ‘Groped’ My Crotch.”

Mercedes Schlapp depicted the plaintiff as a troubled individual who was fired for lying on his resume, according to the complaint. The ex-aide calls their denials defamatory.

The accuser’s attorney Timothy B. Hyland called his client a victim of sexual assault by Schlapp.

“The complaint details claims for battery, defamation, and conspiracy,” Hyland wrote in a statement. “Our client takes no joy in filing this lawsuit. However, Mr. Schlapp has had ample time to accept responsibility and apologize for his despicable actions. But instead of doing the right thing, Mr. Schlapp, Ms. Schlapp, and their friends and associates embarked on a ridiculous, spurious, and defamatory attempt to smear the reputation of Mr. Schlapp’s victim.”

Schlapp’s lawyer Charles Spies signaled that his client might file a countersuit.

“This anonymous complaint demonstrates the accuser’s real agenda, working in concert with Daily Beast to attack and harm the Schlapp family,” Spies wrote in a statement. “The complaint is false and the Schlapp family is suffering unbearable pain and stress due to the false allegation from an anonymous individual. No family should ever go through this and the Schlapps and their legal team are assessing counter-lawsuit options.”

Former federal prosecutor Mitchell Epner, who practices media law with Rottenberg Lipman Rich PC, told Law&Crime the anonymous nature of the lawsuit could avoid a typical pitfall of filing for the plaintiff.

“Defamation claimants often have to worry about the ‘Streisand Effect,’ whereby suing about defamation spreads the allegedly defamatory statement far wider than the original statement,” noted Epner, referring to Barbra Streisand’s backfired attempt to suppress a photograph of her house that led to its greater dissemination.

“Here, that is not a worry for the plaintiff,” Epner continued. “The real gravamen of the complaint is that Matt Schlapp sexually harassed him, and that Mr. and Mrs. Schlapp defamed him to cover it up. The substance of the defamation is secondary to those allegations.”

The lawsuit seeks $9.4 million against the Schlapps for four separate causes of action leveled in the 19-page complaint. The first two counts accuse the CPAC head of battery and defamation. The third accuses his wife of defamation and the fourth accuses both of conspiracy.