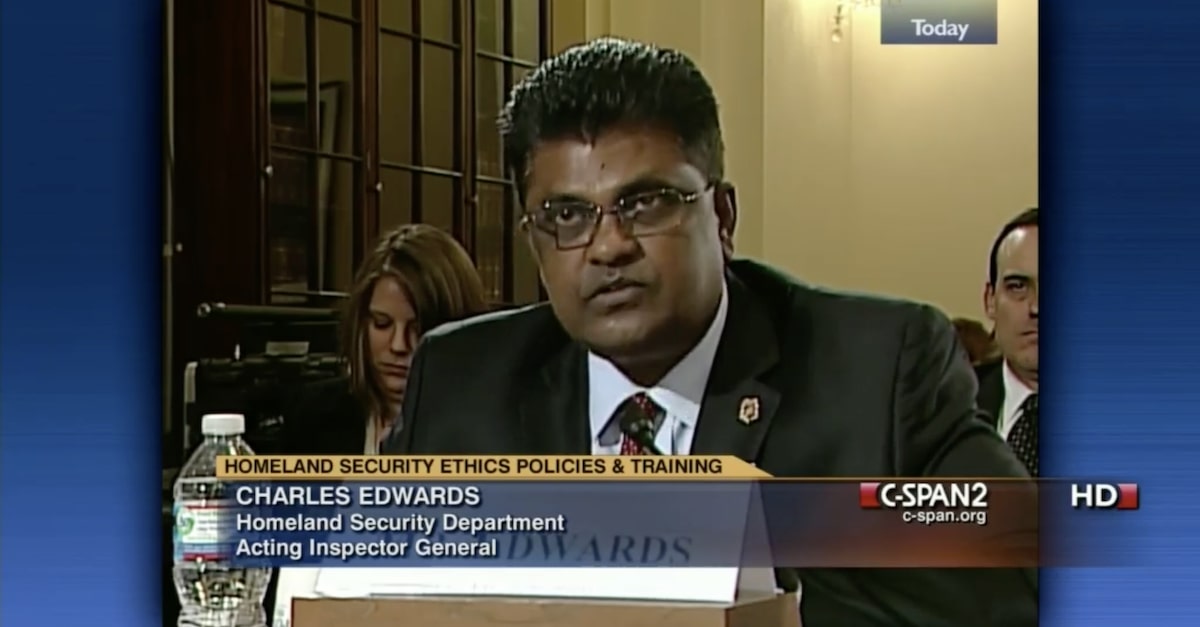 The ex-watchdog who oversaw the Department of Homeland Security pleaded guilty on Friday to stealing propriety software and sensitive databases from his old job for his private business.

Charles K. Edwards, 61, served in the Obama administration as the Acting Inspector General for the Department of Homeland Security between February 2008 until December 2013. He served before that time as the inspector general for the U.S. Postal Service.

Inspectors general work as a watchdog for government agencies, intended to act independently of them to prevent waste, fraud and abuse. Among other topics, Edwards testified in Congress in May 2012 about criminal activity and misconduct by Homeland Security employees, particularly those working for subagencies such as the Transportation Security Administration, Customs and Border Protection, and Immigration and Customs Enforcement.

A C-SPAN broadcast of that testimony captioned Edwards’s testimony as about “Homeland Security Ethics Policies & Training.”

On March 5, 2020, however, the Department of Justice announced that it had been watching the watchdog. Prosecutors unsealed a grand jury’s indictment on that date alleging that Edwards stole government software and databases for a company that he founded after his life in public service: Delta Business Solutions, Inc., located in Maryland.

“From at least 2015 until 2017, he stole software from DHS-OIG, along with sensitive government databases containing personal identifying information of DHS and USPS employees, so that his company could develop a commercially owned version of a case management system to be offered for sale to government agencies,” the Justice Department said in a press release.

Murali Y. Venkata, an information technology specialist who worked in Edwards’s office, was charged as a co-defendant, and he has denied the allegations against him.

“Offered to Sale to Government Agencies”

During a federal court hearing on Friday morning, Edwards pleaded guilty before U.S. District Judge Randolph Moss to conspiracy to defraud the United States and theft of government property. Edwards’s sentencing date has not yet been set.

His attorney Courtney Roberts Forrest, from the firm Kaiser Dillon, did not immediately respond to an email requesting comment.

Neither did Venkata’s attorney Kamil R. Shields, from the firm Sullivan & Cromwell.

“Defendant Edwards used, possessed, and transferred stolen DHS-OIG and USPS-OIG documents and information, including PII of DHS and USPS employees, to software developers in India, who were assisting Defendant Edwards with the creation and development of a private, commercially owned version of a case management system to be offered for sale to government agencies for the benefit, enrichment, and profit of Defendant Edwards and his business DBS,” the indictment states.

The Justice Department’s senior litigation counsel Victor R. Salgado of the Criminal Division’s Public Integrity Section signed the indictment. So did representatives from the departments Public Corruption and Civil Rights Section of the U.S. Attorney’s Office for the District of Columbia.