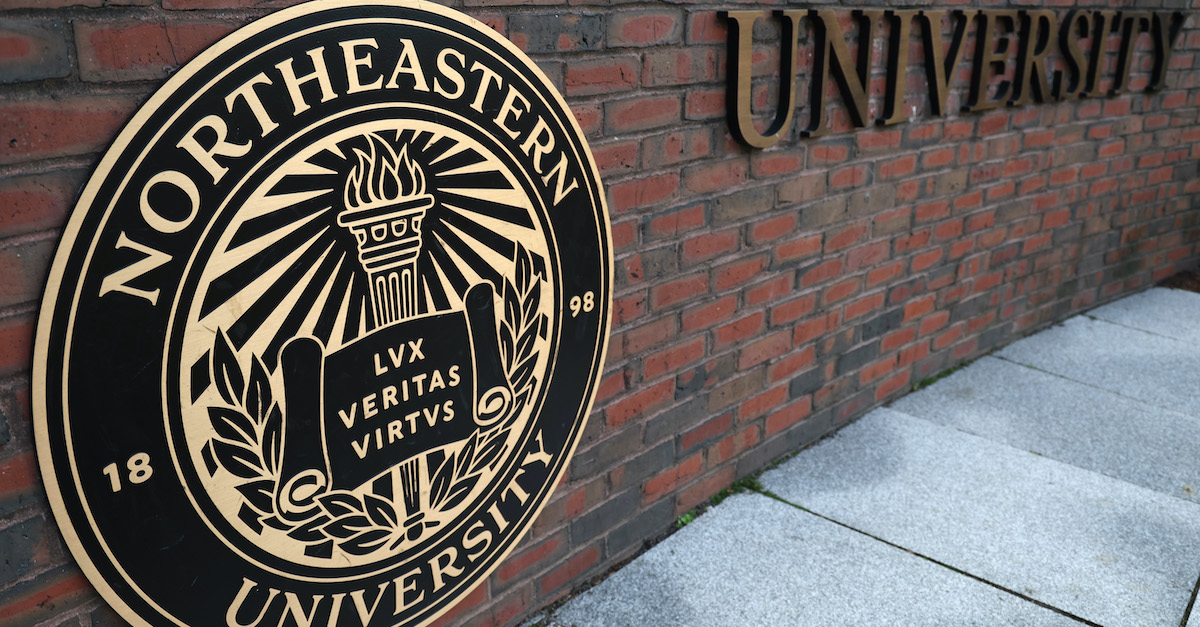 A general view of signage on Northeastern University Campus on Sept. 14, 2022 in Boston, Massachusetts. On Tuesday evening, a university employee was injured when a package sent to the virtual reality lab at Holmes Hall exploded when he opened it. (Photo by Maddie Meyer/Getty Images)

After reports of an explosion at a lab inside the Northeastern University campus last month, an employee gave an interview to the Boston Globe insisting that the account was dangerous and real: “I did not stage this,” Jason Duhaime, the new technology manager and director of the Immersive Media Lab, told the paper at the time.

Federal authorities now claim that this was a lie, and Duhaime allegedly burnished those “fabricated” claims with a “violent note” from the supposed attacker. Duhaime, a 45-year-old from San Antonio, Texas, was arrested on Tuesday. 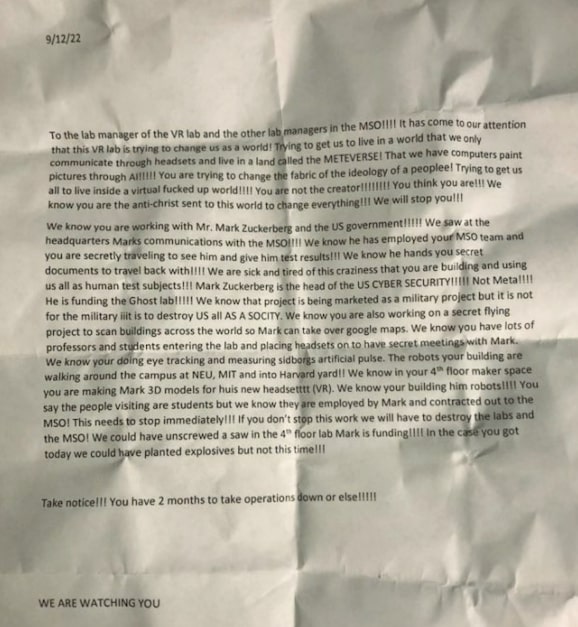 Authorities say that this was the “fabricated” violent note that Duhaime used to allegedly used to perpetrate a “hoax.”

“This alleged conduct is disturbing to say the least,” U.S. Attorney Rachael S. Rollins told reporters. “Our city, more than most, knows all too well that a report or threat of an explosion is a very serious matter and necessitates an immediate and significant law enforcement response given the potential devastation that can ensue.”

Representing the District of Massachusetts, Rollins appeared to be alluding to the Boston Marathon bombing of 2013.

On the evening of Sept. 13, 2022, Duhaime allegedly dialed 911 to report that he had been injured by “sharp” objects expelled from a plastic case.

“Duhaime also reported that the Subject Case contained a threatening letter directed at the Lab, authored by an unknown person or persons,” the FBI’s affidavit states. “Duhaime’s 911 call and his statements to the federal agent generated an enormous law enforcement response that included, among other things, the assistance of two law enforcement bomb squads, the evacuation of a large portion of Northeastern’s Boston campus,” along with a “numerous campus-wide alerts” by the university.

The FBI says that a Northeastern Police Department officer arrived first at the lab following Duhaime’s call, and authorities say that the scene had marked inconsistencies with the account provided to 911.

“The subject case was empty,” the affidavit says, referring to the “Pelican” case that supposedly contained explosives and projectiles. “The inside and outside of the case did not bear any marks, dents, cracks, holes, or other signs that it had been exposed to a forceful or explosive discharge of any type or magnitude. Likewise, aside from several fold marks, the Letter was pristine. It bore no tears, holes, burn marks, or any other indication that it had been near any sort of forceful or explosive discharge.”

Authorities also found what they believed to be peculiarities with Duhaime’s reported injuries.

“Duhaime raised his sleeves for the Northeastern officer, revealing several small, superficial marks or bruises on his lower forearms,” the FBI wrote. “Duhaime’s shirt, however, did not appear
damaged.”

The FBI says that it found a “word-for-word, electronic copy of the letter” on a laptop in Duhaime’s office later that month, and its metadata suggests it was created hours before his 911 call.

After a Joint Terrorism Task Force agent informed Duhaime in an interview that it was a crime to lie to authorities, Duhaime responded: “I’m telling you the truth, the whole truth, and nothing but the truth so help me God,” according to the affidavit.

“We believe Mr. Duhaime wanted to be the victim, but instead victimized his entire community by instilling fear at college campuses in Massachusetts and beyond,” said Joseph R. Bonavolonta, the Special Agent in Charge of the FBI’s Boston division.

Bonavolonta said that Duhame’s alleged crimes should not be minimized.

“Making false threats is not some harmless prank,” Bonavolonta said. “It’s selfish, short-sighted and a federal crime. It drains law enforcement resources, diverts us from responding to an actual crisis, puts people at risk, and instills fear in the community. Hoax explosive devices and fictitious letters threatening violence cause real world damage.”

The charges against him were filed on Monday and unsealed today with his arrest.