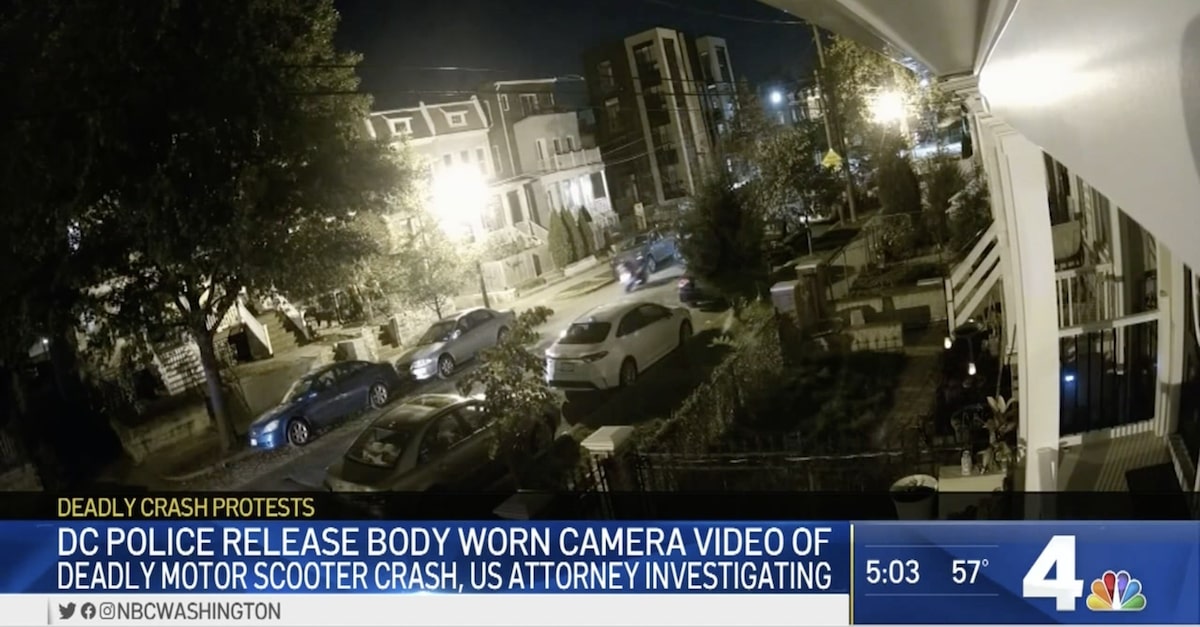 Just shy of a year after the incident sparked protests on the streets Washington, D.C., a federal grand jury indicted a Metropolitan Police Department officer for second-degree murder in connection with a deadly motor scooter chase that began after an alleged traffic violation.

Officer Terence Sutton, a 12-year veteran of the MPD, faces a charge of murder in the second degree. Sutton and Lt. Aaron Zabavsky also face charges of conspiracy and construction of justice.

“For more than three minutes, Sutton pursued Hylton-Brown through neighborhood streets with pedestrians and other vehicles present,” their indictment states. “At times, Sutton accelerated to more than double the residential speed limit, at one point reaching 45 miles per hour (mph). Sutton pursued Hylton-Brown for more than ten blocks, driving the wrong way on a one-way street and passing through multiple ‘STOP’ signs.”

Prosecutors say that Zabavsky activated his emergency lights, helped initiate the pursuit and overtook Sutton as the primary vehicle behind Hylton-Brown for about one block. Zabavsky eventually separated from Sutton on a parallel path to intercept Hylton-Brown from another direction, according to the indictment.

The chase would end in tragedy.

“The pursuit ended when Sutton followed Hylton-Brown into an alleyway, deactivated his police vehicle’s emergency lights and sirens, and accelerated behind Hylton-Brown as Hylton-Brown approached the alleyway’s exit onto the 700 block of Kennedy Street,” the indictment states. “Immediately upon entering the street, Hylton-Brown was struck by an oncoming civilian vehicle. The impact ejected Hylton-Brown off the moped and across the full width of the alley, in plain view of Sutton. Zabavsky—who seconds before the collision had initiated a U-turn less than half a block away that positioned him to face the mouth of the alleyway—arrived at the scene approximately 16 seconds after the impact.”

“Hylton-Brown lay in the street motionless, unconscious, and with a pool of blood collecting underneath his head,” it continues. “Neither Zabavsky, the scene, nor Sutton, the officer who pursued Hylton-Brown onto Kennedy Street, made notifications about Hylton-Brown’s condition to MPD’s Major Crash Section (MCS)—the MPD component responsible for investigating traffic crashes involving serious bodily injury or death.”

Acting U.S. Attorney Channing D. Phillips said that the “vast majority of officers execute their duties in an exemplary manner.”

“But when a select few violate their oath by engaging in criminal conduct, they cannot do so with impunity and must be held accountable,” Phillips wrote in a statement. “This indictment seeks to do just that.”

During an initial appearance, a judge released Sulton and Hylton-Brown to electronic monitoring at home with permission to travel.

Sutton’s attorney J. Michael Hannon got into a testy exchange with prosecutors over his characterization of Hylton-Brown, whom he claimed was “believed to be in possession of a weapon.”

“This is in the face of 12 and a half years of distinguished service not only in the Metropolitan Police Department but in the Fourth District,” Hannon said, referring to his client’s career.

Hannon said that Sutton’s support comes not only from the department but members of the district tired of “drug activity” that takes place there. The lawyer sent reporters a press release accusing the victim of being a leader of a drug ring.

A D.C. police officer was indicted Friday on murder and obstruction charges in the death of 20-year-old Karon Hylton-Brown.

It’s a rare criminal charge filed against a police officer involving an on-duty death in the District:https://t.co/ns8H25Ce1V

The Washington Post reported that Sutton had misdemeanor drug convictions—but no felonies.

“At the time, despite being only 20-years of age, Hylton-Brown had six pending criminal cases in the District of Columbia and others in Maryland. Hylton-Brown left the area after the altercation and returned on the moped exhibiting an angry demeanor,” Hannon, a former federal prosecutor, wrote in an open letter to MPD Chief Robert Contee. “Officers feared he had returned armed to exact revenge.”

An audibly indignant Assistant U.S. Attorney Ahmed Baset slammed Hannon for “besmirching Mr. Hylton’s character,” with the deceased man not there to defend himself.

“It was not Mr. Hylton who was indicted for second-degree murder by a grand jury,” Baset said. “It was Mr. Sutton.”

U.S. Magistrate Judge Zia Faruqui agreed that attacks on Hylton would be unnecessary in the context of a detention hearing.

“The victim is not on trial,” Faruqui said.